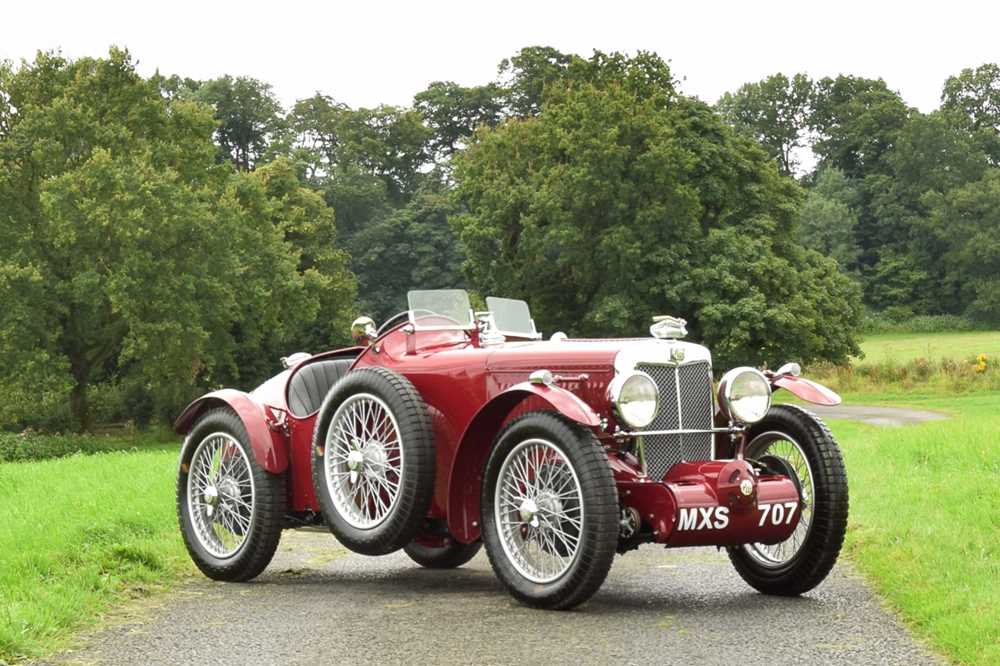 A replacement for the successful J2 Midget, the PA followed the general lines of its predecessor, but was equipped with a more robust version of MG’s 847cc, four-cylinder, overhead-camshaft engine benefiting from a stronger, three-bearing crankshaft and better lubrication. Chassis alterations, many resulting from competition experience, included a longer wheelbase, strengthened transmission and 12”-diameter (up from 8”) brakes. Some 2,000 PAs were produced between 1934 and 1935 when the model was superseded by the relatively short-lived PB, of which a mere 526 were produced. As the final development of the classic ‘Midget’ line of MGs the PB differed in detail in several respects to its predecessor. Most important of these was the enlargement of the engine to 939cc giving both increased torque and power and a revised dashboard layout. As always with MG cars of this period the buyers were very much sporting minded and MG were keen to assist knowing that sporting success amongst their owners could only help sell cars.

MG factory records show that PB 0660 was completed on the 18th December 1935 and delivered to Morris International Exports for shipment to Germany in February 1936. It is not known if she was bought privately through an authorised dealer or was simply delivered into the German automobile industry for examination, possibly to study the design with a view to manufacturing a small capacity sports car; nor is it known when or in what condition she was returned to Britain. There is no record at DVLA of a UK registration ever having been issued for her so it is most likely she returned in dismantled, and incomplete condition - had the car returned intact, it would certainly have been registered for British roads.

Purchased in 2004 as a 'kit of parts' comprising the original chassis frame, front and rear axles, a complete set of brakes, steering components, a rebuilt radiator, a rebuilt differential and sundry minor engine and gearbox parts from the late Peter Green, long time Chairman of the MG Car Club’s Triple-M Register and a renowned authority on all things 'Triple-M'. There was no engine block supplied, however our vendor was able to source a new one, also from Peter Green and for which, as per the requirements of the Triple-M Register, now features the original engine number '888 APB' with the suffix ‘2’ to indicate a replacement block. A lifetime VSCC member and prolific collector of all things Vintage, the vendor set out to rebuild chassis PB 0660 as a quick, lightweight road car with the potential for competition if required.

Work commenced in October 2005 and was completed in the Spring of 2020; The chassis frame was in good condition and only needed shot-blasting and powder coating, as did the front and rear axles. The front axle was refurbished professionally by Mike Dowley of Sports and Vintage Motors with new king-pins and bushes. Mike Dowley also rebuilt the steering box with a new steering drop-arm as the original failed its crack-test. The two steering arms also failed their crack-test so were replaced by new ones. The track rods were in good condition and were fitted with new track rod ends and ball joints. The rear axle with the refurbished differential was fitted with new racing-grade hardened steel half shafts and new bearing carriers, bearings and seals. All four brake drums were skimmed and all the brake shoes were relined. The brake activating levers and cams were all in good condition and were fitted to the back plates with new return springs. New brake cables, hubs and seals were fitted all round. The axles are attached to the chassis with new road springs and shackles, and she sits on four new 19” wire road wheels supplied by Motor Wheel Services, fitted with new Blockley 4.00-4.50 tyres. The spare wheel has been rebuilt by Phil Hallewell, and shod with a matching new Blockley tyre.

The engine was professionally refurbished by marque specialist Ken Robinson, using the aforementioned new block, a new solid steel Phoenix crank, new Carillo conrods and a new set of forged alloy Venolia pistons (supplied by Baynton Jones). A new correct-specification cylinder head was obtained from Mike Dowley and this was refurbished by Ken Robinson with a new sports cam, also from Baynton Jones and new valves and valve springs etc. An original flywheel was lightened, and then balanced together with the crank, rods and pistons - A new plate clutch was also fitted. The original 3 brush dynamo was replaced by a new 2-brush example, generally accepted as more reliable especially for night driving and a new lip seal has been fitted at the top of the vertical drive to replace the original one which was prone to leaking. A very good, used Volumex supercharger was sourced from Richard Hardy of 'Vintage MG Parts', who also supplied all the correct manifolds for it. A correct, new 2 ¼” SU/Burlen was supplied by Barry Walker and Ken Robinson rebuilt the supercharger and keyed the gears onto the shafts for safety in case of blow-back from the engine. Mike Dowley supplied a new set of close-ratio gears which were built into an original PA gearbox casing which the vendor already owned and he also supplied a new prop-shaft as the originals were in poor condition. 'S and V' supplied a new correct PB wiring loom and a set of instruments and gauges.

The vendor had previously decided he wanted an aluminium body with a pointed tail and obtained one from Ray Pettit of Compound Curvatures. These are made for the ‘Q’ Type replicas often fitted to early ‘T’ Type chassis (which are actually a few inches longer than the ‘P’ Type chassis). Alan Floyd of Classic Car Panel Repairs at Worksop was tasked with shortening the body to fit - he also made the bonnet, side valances, supercharger cover, seats, floorboards front and rear bulkheads, dashboard, both fuel tanks and sundry other brackets and fixings, plus the fuel lines.

The result of the above is an attractive, very light open 2 seater with a powerful supercharged engine and a close-ratio gearbox. Because it was intended to be used on the road as well as on the track, it carries full road equipment, mudguards, lights, and a spare wheel. For the track, all of these items are very easily removed. The front mudguards together with the head and side lights can easily be removed as one item, and the spare wheel mounting bracket is secured by 5 bolts which are easily accessible. The rear mudguards are each secured by 2 small brackets bolted to the body.

Offered with a box file of receipts, certificates and endorsements from the Triple-M Register of the MG Car Club along with copies of factory build records, 'MXS 707' represents the final development of the classic overhead cam MG Midget; it embodies all the very best of the breed and is truly Safety Fast!