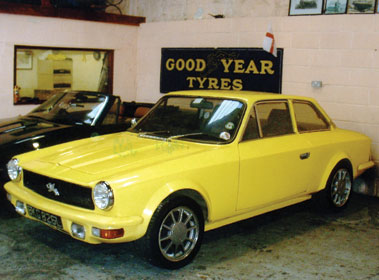 With its factory in Llantwit Fardre, in the Rhondda valley, Gilbern was a genuinely Welsh car company. It was founded during the late 1950s by the unlikely combination of a master butcher, Giles Smith, and a German engineer, Bernard Friese. Smith had decided that he wanted a glassfibre special and, through a chance meeting with Friese, an ex-PoW with glassfibre experience, he discussed the possibility of building a one-off - but the concept was decided too good not to make more. The original cars were based around Austin A35 components and had steel wheels and leaf springs at the rear, while a variety of engines were offered, either supercharged or the Coventry Climax. During 1966 a new car, the Genie, was produced - a radical departure compared to the GT, this was a much larger 2+2 Grand Tourer with considerably more power from the new Ford 'Essex' V6.

In July 1969, the Invader replaced the Genie - it looked basically the same but had a redesigned chassis and detail changes to the bodywork and interior. At the 1970 Motor Show, the Invader MkII was announced, with improved front chassis design, plus an estate version, deliveries of which started in March of the following year. A MkIII, re-engineered to take all Ford components including complete Cortina MkIII front subframe, appeared in September 1972, but the company ceased trading in 1974. Around 600 Invaders were made, around 200 chassis numbers belonging to MkIIIs, of which the final one was numbered M30201.

This is a late MkIII, with torquey 3-litre V6 and Ford four-speed gearbox endowing the lightweight GT with excellent performance and handling. Not much is known of the car's history, though the vendor, describing it as in "generally good" order, says: "shiny yellow paintwork [which includes colour-coded bumpers] will appeal". It wears later, larger alloy wheels than the 13in Ford wheels it would have been supplied with, plus Recaro seats, and is expected but not guaranteed to possess a fresh MOT certificate by the time of the sale.