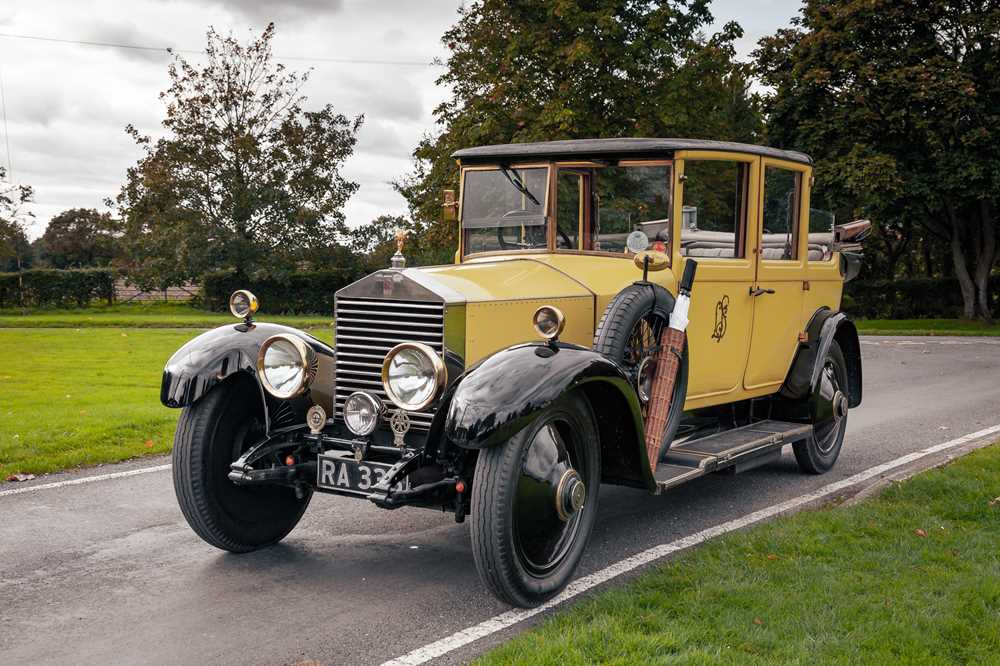 Unveiled in 1922, the 20HP was a second string to the Rolls-Royce bow - a shorter, more economical sibling to the Silver Ghost which broadened the marque’s reach to span both the very rich and seriously wealthy. Instantly distinguished by its horizontal radiator shutters, the newcomer was constructed around a ladder-frame chassis with a 129-inch wheelbase. Power came from a 3,127cc straight-six, OHV monobloc engine mated to a three-speed manual gearbox. Suspension was by semi-elliptic leaf springs all-round. Braking was initially on the rear wheels alone, while steering was by worm and nut. Progressively updated to feature a four-speed gearbox and servo-assisted all-wheel braking, the ‘baby’ Rolls remained in production until 1929, by when some 2,885 examples had vacated the company’s Derby factory. Lighter and more responsive than the Silver Ghost, the 20HP was capable of exceeding 60mph.

Supplied new on 20th August 1926 via Huskinson & Ashwell Ltd of Nottingham to F.R Claye Esq, chassis GUK-71 featured Landaulette coachwork by Park Ward and was finished high-varnished in Purple Blue with fine white coachline and matching blue upholstery. Importantly, this particular example featured the much improved four-speed gearbox, which it retains to this day. GUK-71 remained in F.R Claye’s ownership for 10 years, before being passed on to a Mrs Hannah Claye for a further 19 years. In 1955, the car was sold to a Richard Edward Derington-Fenning of the Royal Hotel, Ashby-de-la-Zouch who owned the car for 38 years, during which time, this Rolls-Royce 20hp Landaulette would gain the admiration it has to this day.

The car retains its registration ‘RA 333’ and is arguably the most famous 20hp in existence; being the car used throughout ITV’s adaptation of H.E Bates’ ‘Darling Buds of May’, starring David Jason as Pop Larkin. Pop’s beloved Rolls-Royce instantly became an icon of the show, with die-cast models of the car widely available.

RA 333 was purchased by its current keeper in 2019 for the sum of £100,000. Currently stored in a Carcoon within a dehumidified unit it has been lovingly maintained, even being offered for sale with a current MoT valid until 5 May 2022. Offered with this famous 20hp is a comprehensive folder featuring rarely seen documents, including the original order confirmation letter, bill of sale and specification sheet from 1926. In addition, copies of pre-delivery inspections are included, as well as the original logbook, a copy of the original guarantee and an instruction manual. Additional documentation includes previous MoT certificates and invoices including a printed summary of maintenance post-1992, and of course, photographs and press information relating to the Darling Buds of May series.