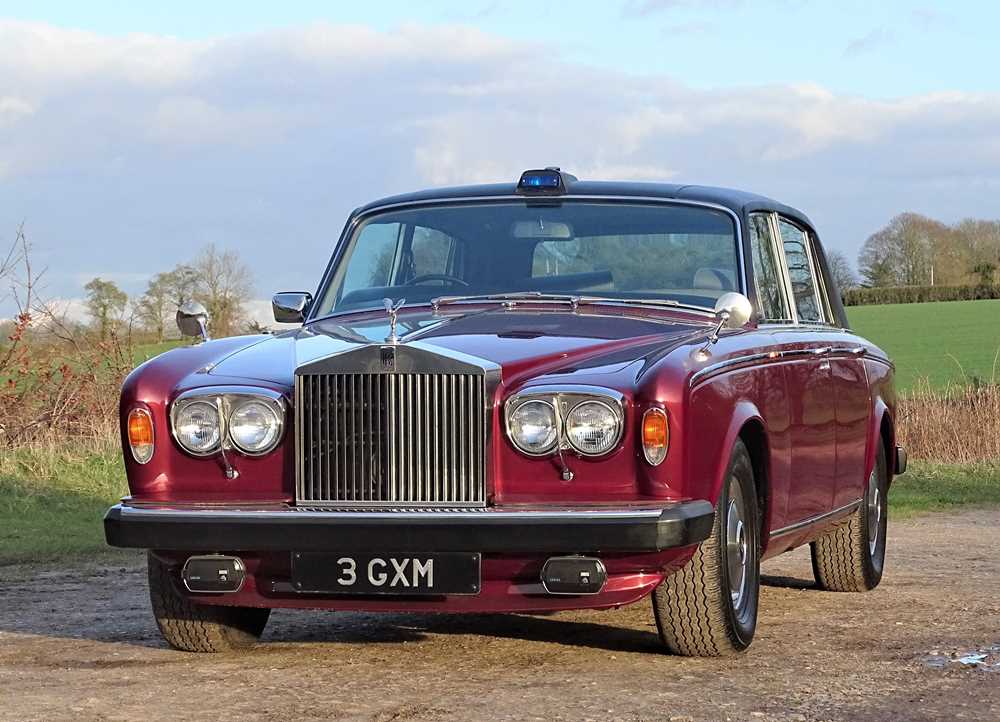 PLEASE NOTE: This lot is currently road registered as 'PMY 542W'. The number plate worn by several of HRH Princess Margaret's cars, and the one which adorned chassis LRH0039342 during her ownership, '3 GXM', is also owned by the seller and can be bought for £20,000 plus fees.

Handbuilt to special order, the Rolls-Royce Silver Wraith II had a four-inch longer wheelbase than its humbler Silver Shadow II sibling. Beloved of the world’s elite, just 2,135 were made between 1977 and 1980. Those familiar with Hans Christian Anderson’s fairy tale ‘The Princess and the Pea’ will be unsurprised to learn that HRH Princess Margaret insisted that the upholstery piping on the front and rear seats of this, her final Rolls-Royce, be moved back so that there was no danger of it contacting her neck should she choose to recline at any stage. Genuine Princesses it seems really are more sensitive than their subjects. The rest of the car’s interior is similarly bespoke with a false floor to the rear, the back seat squab mounted as low as possible (HRH was only 5ft 1in tall), enlarged C-post vanity mirrors, special small spotlights added to each rear cantrail, Green Cloth upholstery throughout (with a loose cover for the driver’s seat), and Black Nuella leather being used to clothe the top and bottom of the dashboard, centre console and door cards. The dashboard itself carried a Matt Rosewood veneer and did without a lock for the glovebox. The latter contained the switch for the roof-mounted Police Escort light and thus needed to be instantly accessible. A centre rear seatbelt was omitted as were armrests to the rear doors and Duchess straps (hardly fitting for a Princess).

H&H have had the privilege of offering several Royal cars over the years and it is not uncommon for them to be specified with similarly non-reflective interiors so as to make photographing their occupants easier (HRH The Duke of Edinburgh’s 1954 Lagonda 3 Litre that fetched £340,000 in April 2016 eschewed wood in favour of Dark Green leather for its dashboard and door cappings). Such alterations are not motivated by pride but rather a consciousness that once in the public eye members of the Royal Family are very much on parade. To the exterior, HRH Princess Margaret ordered that chassis LRH0039342 should have opening front quarter lights and its side indicator repeater lights repositioned in the chrome swage line (rather than below it as was standard). The accompanying copy build sheets also note: ‘Silver Wraith II emblem on boot and RR badges on rear quarters are NOT REQUIRED’. The roof above the windscreen was modified to accommodate a flag mast and illuminated shield. HRH Princess Margaret gave Rolls-Royce less than five months to tailor the Silver Wraith II to her personal specification. Indeed, chassis LRH0039342 had originally been ordered in Moorland Green with Beige leather upholstery by J. Barrett Esq. via Jack Barclay Ltd before Crewe requisitioned it. To meet such a tight deadline many of the unique interior fittings were transferred across from HRH Princess Margaret’s former car, chassis LRH36157, and reconditioned accordingly. Finished in Cardinal Red and initially road registered as ‘3 GXM’, the limousine was delivered to Kensington Palace on 16th May 1980. A warranty card issued the same day lists the purchaser’s name correctly. However, all the way through the order process she had been referred to under the pseudonym ‘Mr Edgar’. No spendthrift, HRH Princess Margaret nevertheless kept her special order Rolls-Royce for twenty-two years; its last official journey being to convey family members to her funeral at St George’s Chapel, Windsor Castle on 15th February 2002.

Exactly how many notable personages have been conveyed in this one-off Silver Wraith II remains a mystery. Although, it is known to have hosted Paul Getty, Ronald and Nancy Reagan, Lady Diana Spencer (before she married Prince Charles), HM The Queen and Queen Mary, The Queen Mother. Maintained by Rolls-Royce and subsequently entrusted to marque specialist Chris Lee, chassis LRH0039342 had covered 44,000 miles by the time that The Earl of Snowdon David Linley inherited it. Pilloried in the tabloid press at the time for selling off so important an heirloom, Snowdon has since told the vendor that he only did so after offering the car to the Royal Mews. A keen Royalist, Ronald Allwright became the Silver Wraith II’s first registered keeper when he bought it from marque specialist P&A Wood in June 2002. In addition to renewing the Black Everflex roof, fitting a refurbished steering rack and routine maintenance, Mr Allwright also went to great pains to research the Rolls-Royce’s history entering into correspondence with The Right Honourable The Earl of Snowdon and receiving Christmas cards from HRH Princess Margaret’s chauffeur, Dave Griffin.

The subject of a four-page article by Martin Buckley in the February 2016 issue of Classic & Sportscar magazine, chassis LRH0039342 was purchased by the seller from JD Classics shortly thereafter. Joining a significant private collection, it had a battery trickle charger/conditioner installed and underwent a thorough waxoyl treatment at a cost of some £4,554. Starting readily upon inspection, the Rolls-Royce has covered less than a thousand miles since it was last serviced by Bentley Leicester on 3rd January 2018 at 47,336 miles. Forever in the shadow of her older sister HM The Queen, HRH Princess Margaret did her best to live her own life, her own way. Keeping a car for twenty-two years is not typical of the Royal Family nor is personalising it to this degree. A very special, very important and low mileage Silver Wraith II which surely belongs in a museum. Offered for sale with copy build records, service invoices and a wealth of period photos.

PLEASE NOTE: This lot is currently road registered as 'PMY 542W'. The number plate worn by several of HRH Princess Margaret's cars, and the one which adorned chassis LRH0039342 during her ownership, '3 GXM', is also owned by the seller and can be bought for £20,000 plus fees.