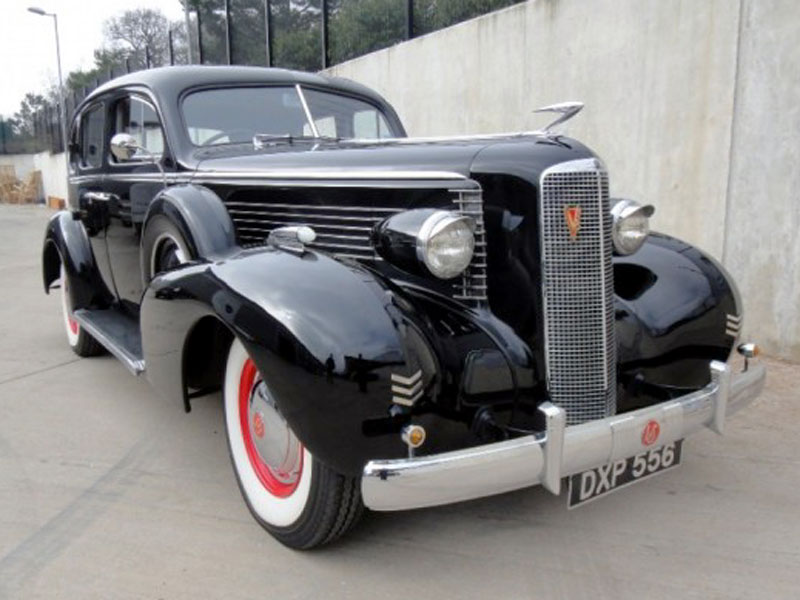 Conscious that the $1,000-plus price gulf which existed between the most expensive Buick and cheapest Cadillac was costing it sales, General Motors unveiled a new marque for 1927. It was branded LaSalle after the seventeenth-century French explorer René-Robert-Cavelier, Sieur de La Salle and the debut offering was penned by the soon-to-be-legendary Harley Earl. The initial products had a decidedly European air about them and Earl was the first to admit he had taken his inspiration from the contemporary Hispano-Suiza range. Utilising much the same chassis and drivetrain technology as Cadillac (the two companies shared the same chief engineer, Ernest W Seaholm) but exuding a younger image, the new brand became an overnight success. Indeed after just a couple of seasons, it was a case of LaSalle setting the trends rather than Cadillac.

'DXP 556' is an exceedingly rare right-hand drive 1937 Fisher-bodied LaSalle Series 50 four-door Sedan. It was sold new to Dr. A Jefferson Bernhardt by UK Cadillac dealer Lendrum & Hartman. The good doctor is believed to have been a Harley Street surgeon and apparently kept the car in almost daily use until the late 1960s. It retains its original 320ci (5.2litre) flathead V8 engine and three-speed, floor-change manual gearbox - the former has been extensively refurbished along with such ancillaries as the steering box, brakes, suspension and wheel bearings. The original six-volt, positive earth electrics have been retained, but an additional 12-volt starter set-up system has been added, along with a stainless steel exhaust system. The hub caps have been re-chromed and the original steel wheels restored and shod with (almost new) whitewall tyres.

The bodywork has never been fully restored nor required any welding underneath. The vendor regards the paintwork as "almost flawless" and the panel fit as "exceptional". Much of the brightwork is evidently original, as are the clocks and dials, steering wheel, opening rear quarter lights, headlining and fully functioning factory-fitted sunroof. 'DXP 556' (that is the car's original number) comes with plenty of history comprising several large A4 files whose contents include: many invoices for service and repair over the years, some handwritten correspondence from Lendrum & Hartman dating back to the 1940s and beyond, other letters, numerous old MOT certificates, the original shipping document dated February 19th 1937, not to mention DVLA print-outs of the keeper history from new.

Very few such LaSalles were produced in RHD form and considerably fewer still survive. Not surprisingly, this one is recognised by both the UK pre-'50s American Auto Club and the USA LaSalle register. A rare and exciting opportunity.
Share: