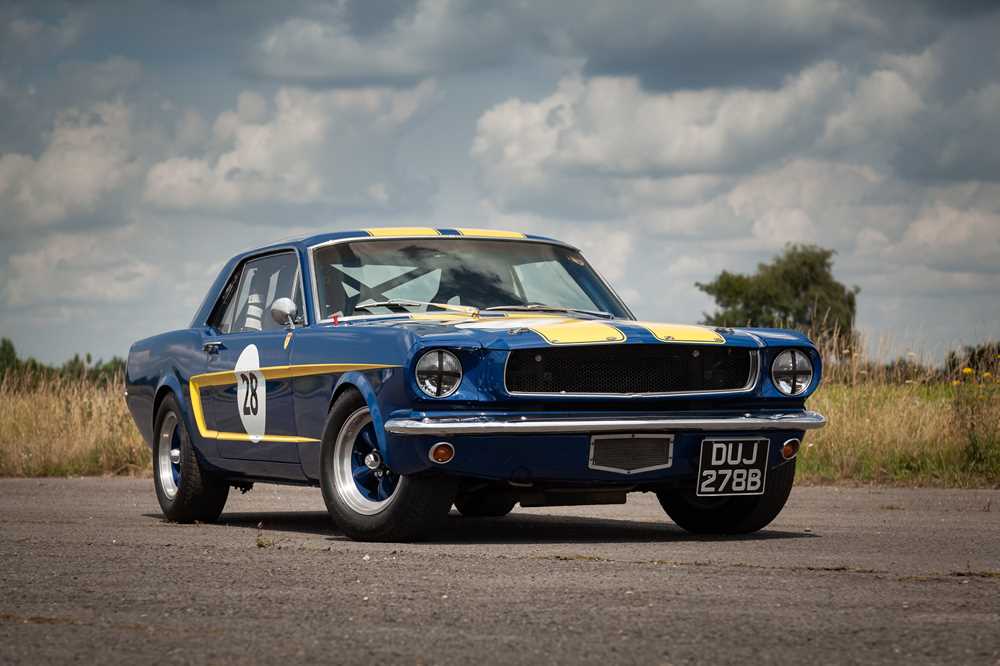 This stunning-looking Mustang Competition Car was bespoke built for our founder Simon Hope. Ever one to maximize his return on investment, the brief given to Gary Spencer of Classic Racing Cars Ltd, Seighford was to create a machine that could be used for circuit racing, sprinting, hillclimbing and road rallies. Put simply, Simon wanted a ‘Tour Auto’ car that could promote H&H at as wide a variety of events as possible.

A notably rare 1964 ½ model year Hardtop Coupe, chassis 5F07F195568 was built at Ford’s Dearborn, Michigan plant complete with a 260 cu in (4.2 litre) V8 engine. Migrating to Europe sometime thereafter, it was found to be remarkably straight and corrosion free when sourced for the project. Chemical dipped and seam welded, the bodyshell was further reinforced via the installation of a FIA compliant roll cage. Tim Adams Racing Engines supplied a suitable 289 cu in (4.7 litre) V8 running on 98 RON fuel with a booster which was allied to a T&C four-speed manual gearbox. A brand new rear axle with limited-slip differential and competition driveshafts was added as were Kelsey Hayes front disc brakes gripped by four-pot callipers. A quick-ratio steering box was fitted along with a fuel cell and facet pump etc. The purposeful interior was given Recaro bucket seats, drilled pedals, aluminium door cards and a plumbed-in fire extinguisher system not to mention a bespoke dashboard and Brantz trip meter. Rewired throughout, the electrical system also benefited from an alternator and the requisite ‘kill switch’. Putting the cost of the donor to one side, the initial build cost some £70,000 and was completed literally moments before the Mustang lined-up for the September 2006 Tour Britannia.

Treated to a further £12,000 worth of fine-tuning encompassing the fitment of new shock absorbers all round and a waxoyl treatment plus much set-up work, the Ford was issued with a MSA HTP (Historic Technical Passport) on April 4th 2007. Winning its circuit debut – a Tin Top race at Silverstone – with Nick Whale sharing the driving duties, the Hardtop Coupe subsequently competed at the likes of Brands Hatch, Donington and Knockhill. It proved every bit as versatile as Simon had hoped allowing him to tackle Prescott Hillclimb, the Benjafield’s Racing Club Cornbury Sprint and the Jersey Festival of Motoring to name but a few. Aside from one minor contretemps with a fellow competitor at the Silverstone Classic, the Mustang has enjoyed an accident-free competition career. Sparingly used since a gearbox overhaul in 2012, it last ran in anger at a Curborough meeting during 2018. Taken to the occasional show and event since then, the Ford is only being offered for sale because Simon has reluctantly decided that his racing days are probably over. Coming to market at a fraction of its build and subsequent maintenance cost (the incomplete bills on file total over £100,000), ‘DUJ 278B’ represents a comparatively affordable entry to a huge variety of historic motorsport.