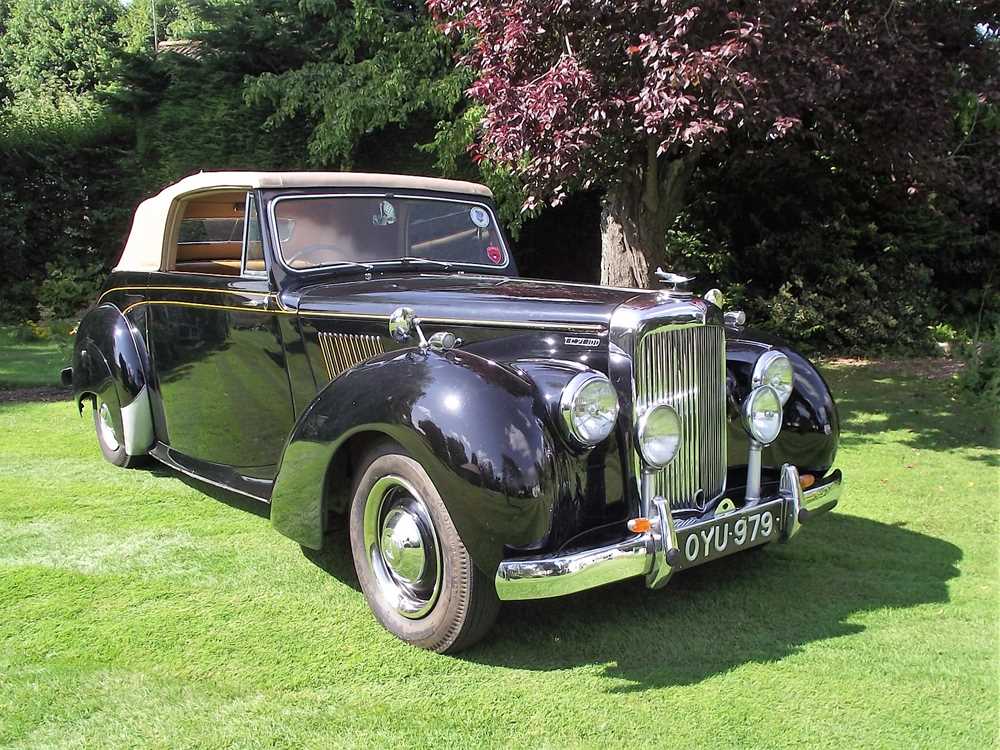 Introduced in 1953, the Alvis TC 21 was a natural rival to the Bentley MKVI and Lagonda 2.6 litre. Powered by a 2993cc OHV straight-six engine allied to four-speed manual transmission, it could be had in Mulliner Sports Saloon or Tickford Drophead Coupe guises. While, those looking for more performance could specify the TC21/100 or 'Grey Lady' version which benefited from a higher compression cylinder head and taller final drive ratio. Credited with 100bhp and a headline-grabbing 100mph top speed, only eighty-one TC21/100 Drophead Coupes were made.

The first Alvis purchased by Group Captain Douglas Bader, ‘OYU 979’ was also the first car to be delivered to a member of the public with Manumatic transmission control. Bader’s friendship with J.J. Parkes, the Managing Director of Alvis, was doubtless a factor in the Coventry manufacturer deciding to fit the system which withdrew the clutch automatically, synchronised the engine revs and engaged the new gear. The famous World War Two fighter ace went on to own TD21 and TF21 models and became renowned at the factory for his perfectionism and occasional impatience! Sold to second owner, Mrs Madeleine C. Cave, by Charles Follett of Mayfair for the princely sum of £850, a letter on file from her recalls a subsequent roadside encounter with Bader during which he remarked: ‘How is she? Glad to see her looking so good’. Retained by Mrs Cave for twenty years during which time a conventional clutch was installed by Alvis, the TC21/100 is known to have subsequently passed to Mr Brown, Mr P.J. Heron and Mr T.J. McKenna prior to entering the current ownership in 2015. Treated to an extensive and photographically documented restoration from 2010-2012 and said to have been ‘well maintained’ ever since, the Drophead Coupe has become a frequent visitor to the Goodwood Revival. A historically important motor car, ‘OYU 979’ is offered for sale with extensive paperwork including copy build sheets, owner’s handbook, sales brochure, period press articles and restoration details etc.