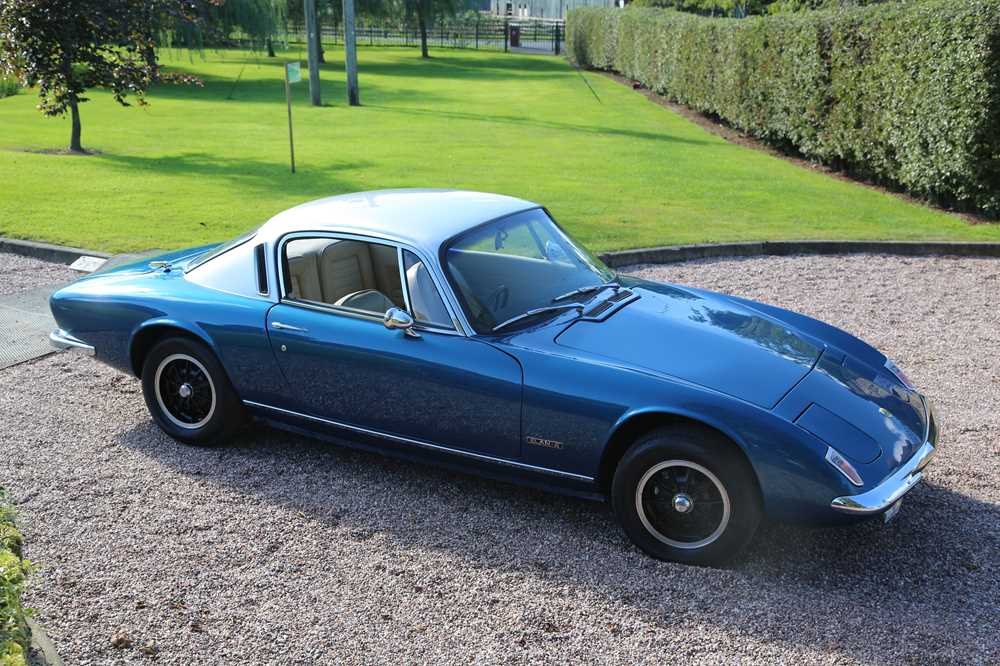 The Elan 2 was revealed to the world in 1962 with a 1500cc engine and a four-speed gearbox in a small and stylish 2-seater roadster form. The Plus 2 (code-named M20) was introduced in 1967 and had arguably better proportions than the 'baby' Elan. In 1971 the +2S 130 was launched with the Lotus 'Twin Cam' engine, providing an improved 126bhp hence the “130” model suffix. It produced a maximum torque of 113lb/ft at 5,500 rpm, providing plenty of power to fully enjoy this lightweight and useable family sports car. The +2S 130 was an appreciable step up in quality with a raft of luxury fittings from quartz halogen fog lights to burr walnut facia and electric windows. In October 1972 the long-called for five speed gearboxes finally arrived as an option, to make cruising smoother, and the Lotus Elan +2S 130/5 became ‘the’ version to have.

This 1973 Lotus Elan Coupe has benefited from an extensive restoration in 2019 and further recent electrical work in October 2021. Powered by a 1.6-litre Lotus-Ford Twin Cam inline-four engine mated to a five-speed manual transmission, the odometer displays just 41,135 miles (not warranted). During the restoration the body and chassis were separated and the body painted in a blue and silver colour combination, while the chassis has been cleaned and painted to protect it from any future corrosion. The work has been executed to a high standard with flush even shut lines and bright, glossy paintwork in lovely condition while the exterior trim is in excellent order. The door and window seals have been replaced and a period correct set of 13-inch Dunlop alloy wheels with black painted centres and polished rims has been fitted.

The interior cabin has been retrimmed in beige vinyl covering the seats, door cards and transmission tunnel. The upholstery is in excellent condition with a very few minor surface marks. The walnut veneer dashboard is smart but has faded slightly with a few minor chips and cracks. The white lettering on the controls is missing, along with the black plastic knobs which cover the ends of the heater control sliders. A modern retro-styled radio, which provides Bluetooth and USB connectivity, has been installed and all of the buttons, switches and electrical items are in good working order.

Mechanically there has been a full engine rebuild including a carburettor refurbishment and the installation of an electronic ignition system. The braking and suspension components have been overhauled and all four wheels are fitted with Toyo 350 175/70 R13 tyres. Its most recent routine maintenance included replacement of the engine oil, oil filter, spark plugs, brake fluid and auxiliary belt, as well as a service of the electrical components. The car comes supplied with invoices for over £10000 for parts bought during the restoration process and a further £1500 for recent recommissioning work. There is also a FIA Historic Regularity Run car pass placing it in the Grand Touring category for use in classic car events.