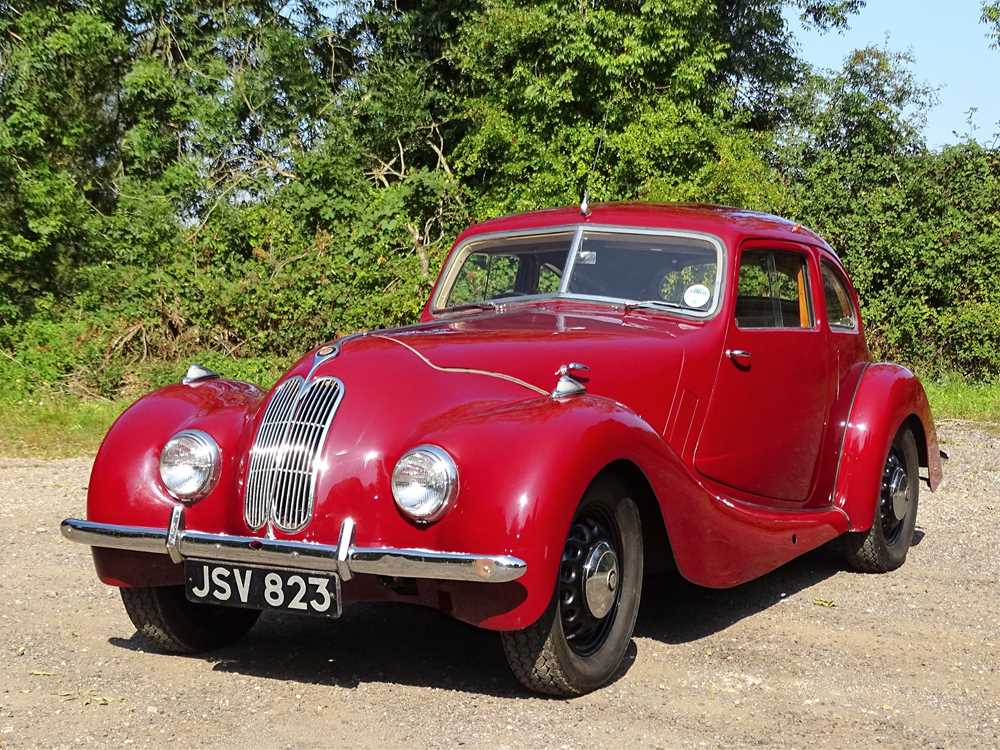 A second series 400 saloon complete with aluminium spare wheel cover and optional top-hinged opening rear window, chassis 421 was allocated new to none other than Diana White whose husband George S.M. White had effectively founded Bristol Cars. Thought to have been initially road registered as ‘BAC 1’ (Bristol Aeroplane Company), the four-seater is understood to have subsequently belonged to P. Buckley and to have spent time abroad before being re-registered as ‘JSV 823’ on August 13th 1982 when in the custody of D. Stephenson. Acquired by the Ball family during 1990, the 400 then passed to Channel Islands resident B. Ching from whom the vendor’s late husband bought it in November 2002.

Despatched to Bristol Car Services Ltd of Chiswick the following October for some £6,000 worth of brake, suspension and back axle fettling, a further £3,619 was spent with the same company on repairing a blown head gasket and renewing the water pump etc. An ex-Works Porsche driver, the vendor’s late husband decided to contest various historic rallies aboard ‘JSV 823’ and to this end he enlisted the services of classic car restorer and race preparation specialist Nicholas Finburgh who had learned his craft at his father’s renowned firm Classic Autos of Kings Langley. Accompanying invoices for the ensuing engine overhaul total over £24,000 including a Farndon Engineering nitrided crankshaft, high lift camshaft, chromed rocker shaft, bespoke head gasket, Bristol long rods, Cosworth pistons / rings, new bearings, valves, Vokes air filters and titanium valve caps etc not to mention multiple specialist repairs to the cylinder block and head. Running a 10:1 compression ratio there is mention in the history file of the uprated engine developing 150bhp. However, there are no dyno sheets on file to confirm this output.

The engine work took two years to complete (2005 – 2007) and in the meantime the vendor’s late husband had the 400 completely re-trimmed by Tony Fairweather of Fairweather Restorations in an authentic mixture of Red-piped Cream leather and Brown cloth (Bristol intending the latter to bear the brunt of any scuffing) at a cost of circa £10,000. New front and rear wings were sourced from Vintage Wings and Radiators of Manchester and the car then treated to a bare metal bodywork restoration by Dennis Wright Body Repairs of Norfolk between 2007 and 2008 at an estimated cost of £20,000. A close-ratio (Type CR2) four-speed manual gearbox was obtained from Bristol Cars for £2,232 in January 2008 and a new clutch installed by Nicholas Finburgh that May. The front brakes were overhauled in 2009 and the fuel tank flushed by Classic Restorations Ltd of Bedford during September 2011 (£1,051.88).

Having covered a mere 1,500 miles or so over the past decade, ‘JSV 823’ is currently running and driving and may well be driven to the sale but would benefit from some recommissioning / servicing. Something of a wolf in sheep’s clothing with its tuned engine and close ratio gearbox, this striking 400 is made doubly special by its White family provenance. Offered for sale with V5C Registration Document and history file.

PLEASE NOTE: This lot was the subject of a Classic & Sportscar article - https://www.classicandsportscar.com/features/something-borrowed-celebrating-bristol-400.

PLEASE NOTE: We have contacted Nick Finburgh who overhauled and uprated the Bristol’s engine. Mr Finburgh has kindly sent us a report showing that the reworked straight-six developed 142hp @ 5,450rpm and circa 145lbft of torque when dyno tested in 2007. Mr Finburgh believes that the powerplant could have developed 150hp if fitted with a freer flowing (non-standard) exhaust manifold.