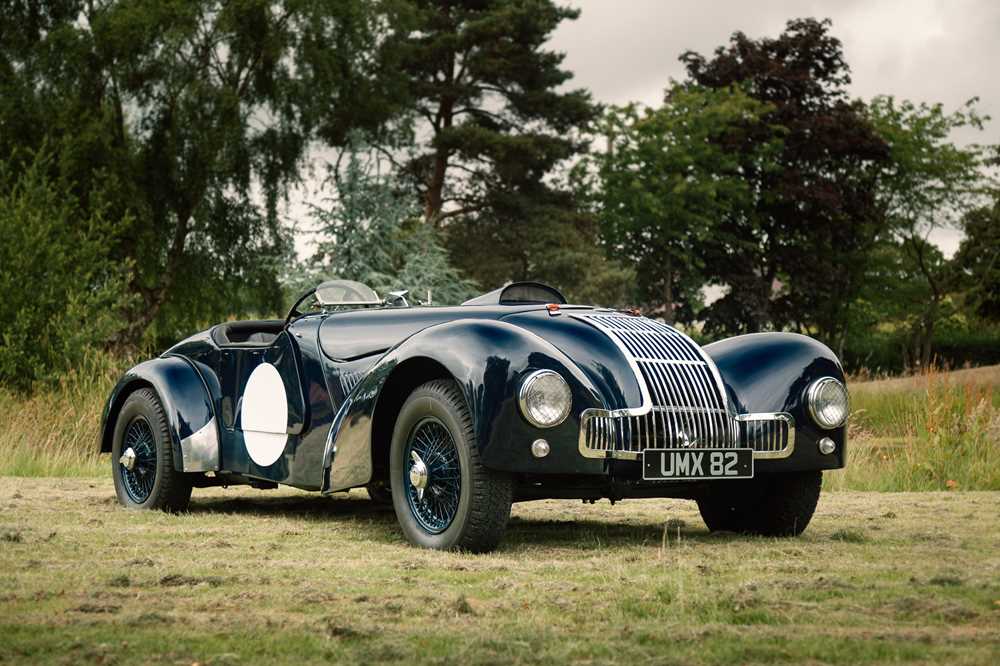 Allard, much like Ferrari and Porsche, began as a phenomenon of the Automotive Renaissance - those exciting, innocent years immediately following World War II. All three marques were race-bred lines fostered by charismatic genius, and all three earned immediate respect on the road as well as on the track. If ever a motor manufacturer was an enthusiast, it was Britain's Sydney Allard. By 1929 he was racing a three-wheeled Morgan at Brooklands. But while Ferrari and Porsche pursued engineering and aesthetic finesse approaching artwork, Sydney Allard's approach was the antithesis. His cars were pure utilitarian machines - crude products of a single-minded effort to harness brute torque and horsepower and most effectively apply it to the road. Based from his family's garage, he graduated to racing flathead Fords and then to building specials powered by both Ford V- and Lincoln V-12's. After WW2, Allard progressed from special builder to motor manufacturer, though the latter activity was really little more than a means of financing the company's competition program. Allard's post-war cars combined the same virtues of light weight, independent front suspension and an abundance of American V8 power, which had been features of that first trials special of the mid-1930s. These favorable characteristics enabled Allard to establish a formidable competition record in the immediate post-war years. Despite its small size and limited resources, Allard's achievements were legion, Sydney himself finishing 3rd at Le Mans in a J2 sports-racer and winning outright at the Monte Carlo Rally in a P-Type saloon. The Allard K1, announced in 1946, was a two-seater on a box-section frame, transverse leaf springing and Ballamy's IFS front axle, and either Ford or Mercury flathead V8 power. Light and powerful, it had excellent acceleration. A longer wheelbase version, called the L1, had a longer wheelbase and seats for four. Like the vast majority of production Allard's, the J1 used Ford/Mercury components, these being readily obtainable from Ford in the UK, while cars bound for the USA were usually fitted with either Cadillac or Chrysler power units. Being top quality, hand-built British cars with American mechanicals, Allard's were very usable and relatively inexpensive to run and maintain. With their powerful and torquey V8 engines, three-speed manual gearbox and high overall gearing, they were fast and exciting cars to drive. Allard's were immensely popular in production sports car racing in North America, providing drivers such as Tom Cole, Zora Duntov, John Fitch and Carroll Shelby with numerous successes - in 1953 Shelby won every race he entered with his Allard.

According to the supplied copies of Allard factory build ledgers, '71K 262' was supplied new to Performance Cars Ltd of Great West Road (via agents Dagenham Motors) as a bare chassis (with mechanicals) and was seemingly completed over a two year period by their in-house coachbuilders. 'UMX 82' was configured with a unique open two-seater touring body, arguably more stylish and practical than the factory-bodied cars. It featured a full width grille, bonnet scoop, curved shorter doors and a large hinging bootlid, in place of the spare wheel carrier on standard factory models. First registered in 1949, the first decade of the car's life remains uncertain, however the continuation 'concertina' logbook states the Allard was in the possession of keen competition driver Anthony R. Pickering of Malpas, Cheshire by April 1958. A 1968-dated letter from well-known rally driver Peter Valentine indicates the car's first and previous owner was a Mr. J. Kempe-Roberts - a member of the Maidstone and Mid-Kent Motor Club. Our vendor did manage to contact a member of the Pickering family who confirmed that Anthony did indeed compete in an Allard K1, including at Cheshire's Oulton Park circuit. Later passing through the hands of Clifford Shepherd Chadwick (1961) and then to Harold David Kennedy in 1967 - he enjoyed success hillclimbing the car, including at the 1969 Harewood 'Vintage and Novices' meeting. Then in need of some much needed TLC; well-known Lancia specialist Chris Bristow purchased 'UMX 82' and set about restoring the drivetrain, with bills on file to document this. Still requiring a comprehensive restoration to the chassis and bodywork, Stan Cale of Cleckheaton, West Yorks purchased the complete project, less wiring and interior trim. By the time of Stan's passing in 2013, the car remained in the same state and was bequeathed to his son Andrew, who set about finishing what his father sadly never got around to starting. A full and comprehensive restoration began over a seven year period, with work carried out by respected restorer Bob Fenton and parts supplied by O'Neill Ford and Belcher Engineering (who were able to source a correct specification re-con gearbox).

Starting readily upon inspection and running well during our recent photography session, the Allard is described by the vendor as 'Very good' with regard to its bodywork, engine, electrical equipment, paintwork, gearbox and interior trim. Equally suited to effortless cruising, but light and powerful enough to be a serious contender for continental tours and rallies (with the added bonus of all that luggage space!). 'UMX 82' is one of only three Allards to feature striking bespoke 'Performance Cars Ltd' coachwork and was the only K1 model to receive this special attention. Offered for sale with a current UK V5c registration document and small history file containing a 'concertina' folding logbook, photographs of the car before the restoration commenced, various receipts, a souvenir programme featuring the car and much correspondence covering many decades. The vehicle is also supplied with its original full-width windscreen and the original set of steel wheels can be collected from the vendor's Cleckheaton home if required (at no additional cost).