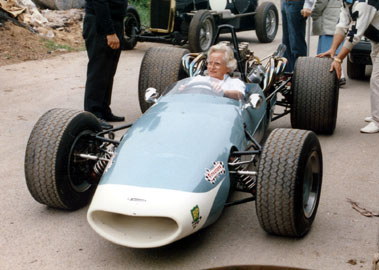 A respected figure in motor racing circles before he met Miss Patsy Burt, the vendor was better placed than most to further her career. Regardless of gender, Burt was a highly accomplished driver who amassed something like 600 awards during a seventeen-year motorsport career that saw her master rallying, circuit racing, hillclimbing and sprinting. Indeed, she was a life member of the British Racing Drivers Club and the third member of her family to be elected. However, by the mid 1960s she had decided to concentrate on hillclimbing and sprinting if only for cost reasons. Thus, it was on the 19th October 1965 that the vendor found himself talking to Bruce McLaren - a friend of both his and Miss Burt's - about the possibility of using the New Zealander's successful M1A Group 7 Sports Car design as the basis of a single-seater. McLaren was seemingly open to the idea, christening it the `Whoosh-Bonk' car. In his book `McLaren' (1984), Doug Nye describes how the Grand Prix winner had insisted "You can take the suspension off the sports car - Whoosh - knock up a chassis and - Bonk - there's the car". However, the hand-written build / development logbook which accompanies the single-seater suggests that McLaren was not quite so flippant about the decision and did not `green light' the project until 23rd November 1965.

Total McLaren M3A production would amount to just three cars. It may seem odd that Burt took delivery of the second chassis (M3A/2) rather than the first one (M3A/1) but the pair were assembled just days apart with the latter acting as something of a guinea pig (M3A/3 came along some while later and was used for the filming of `Grand Prix'). The vendor recalls that "During the initial build up of the first chassis welding caused the lower rail to bow downwards. John Thompson built the other two upside down and they are straight!" Before being delivered its first owner, the Swiss hillclimber Harry Zweifel, M3A/1 was displayed at the 1966 Racing Car Show as a rolling chassis together with an information sheet proclaiming that "The wealth of experience gained by the McLaren unlimited sports cars' successes last year, with lap times in advance of the 1965 Formula 1 class, gives the opportunity to present this New Formula chassis, incorporating many components from the sports car. With an engine bay acceptance from 3-litre to 6-litre, it is ideal for the increasingly popular Formula Libre, sprints and hill climbs, not excluding even Formula 1, subject to customer availability of 3-litre Formula engines. A Grand Prix chassis for £3,000!"

Meanwhile, at Bruce McLaren Motor Racing Ltd' premises M3A/2 was being pieced together by John Brimsted; also responsible for keeping M3A/2 so beautifully prepared throughout its career and the annual revision of M3A/1. Brimsted was an ex-Rob Walker Team mechanic and Service Manager at PMB Garages of Bookham owned by Patsy Burt; the vendor was Managing Director. Although, it had initially been agreed that Bruce McLaren himself would shake down both M3A/1 and M3A/2 at Silverstone, Goodwood became the site of the inaugural test session on 28th March 1966. Fearsome machines, the duo were powered by 4.4 litre Traco Oldsmobile V8 engines allied to ZF five-speed transmissions. With some 360bhp on tap to propel just 495kg, they boasted a power to weight ratio of 727bhp per tonne (Zweifel also took delivery of a 5.0 litre Traco Oldsmobile unit in August 1966). Having cost some £3,900 (against an estimate of £3,100), M3A/2 made its competition debut on 24th April 1966.

Retirement on its maiden event at Loton Park was the first of just two accidents the McLaren suffered during its competitive life. The other in practice at 1967 Course de Cote, St Ursanne - Les Rangiers; repaired overnight and finished in the awards. Progressively developed, M3A/2 gained a Perspex carburettor cover, roll hoop, handbrake and various fuel system modifications for 1967, while 1968 saw its aerodynamics improved via a new sealed nose and semi-enveloping `bubble' canopy. Deriving confidence from the single-seater's tubular spaceframe chassis, all-round independent coil-over suspension and 10.25-inch disc brakes, Burt was seemingly happy to compete in all weathers despite controlling a level of performance that would not have shamed a period Formula 1 car. Among the paperwork on file is another handwritten logbook that details her results and ability to set not just fast but consistently fast times. As if the results outlined below were not enough the vendor and Miss Patsy Burt were also responsible for inventing the `Burt Strut' (pioneered on M3A/2 the protruding vertical blade attachment has since cut countless timing beams the world over).

The manner in which Burt won the 1970 RAC National Sprint Championship was no less impressive than the fact that by doing so she became the first woman to claim a British national motor sport title. The Sprint Championship was held over nine rounds but those contesting the crown were allowed to put forth their best six results only. Burt won all six rounds she entered setting four new course records to boot. Determined to retire on a high, she hung up her helmet at the end of the 1970 season. The McLaren withdrew from competition that year too and has remained part of the family ever since; the vendor and Miss Patsy Bury marrying in 1983. Sadly, M3A/2's pilot succumbed to cancer in 2001 the various newspaper notices reading "BURT - Patsy - regrets with 73 laps completed she has had to retire with mechanical problems". Copy letters of condolence from Sir Jackie Stewart and Sir Stirling Moss remain on file as do numerous affectionate obituaries. The only one of the three M3As originally built that is known to have survived M3A/2 is also among the very earliest McLaren single-seaters left. On display at the Donington Grand Prix collection in recent years but owned by the same couple from new, this truly historic racing car allies impeccable provenance to a wonderful competition record.

Worthy of close inspection, M3A/2 features in William Taylor's book `McLaren - The Cars 1964 - 2008'. A wonderful machine and one that we are very proud to offer, it is accompanied by a RAC Formula Racing Cars Purchase Tax Exemption Certificate dated 16th March 1970 (which interestingly identifies it as a Formula 1 rather than Formula Libre car), Weber carburettor manual, ZF 5DS-25 gearbox manual, sundry other paperwork and the aforementioned handwritten logbooks. An assortment of spares including the famous `bubble' canopy nose will be made available for collection from the vendor's Surrey home if a new owner so wishes (please contact us for a full listing).
Share: