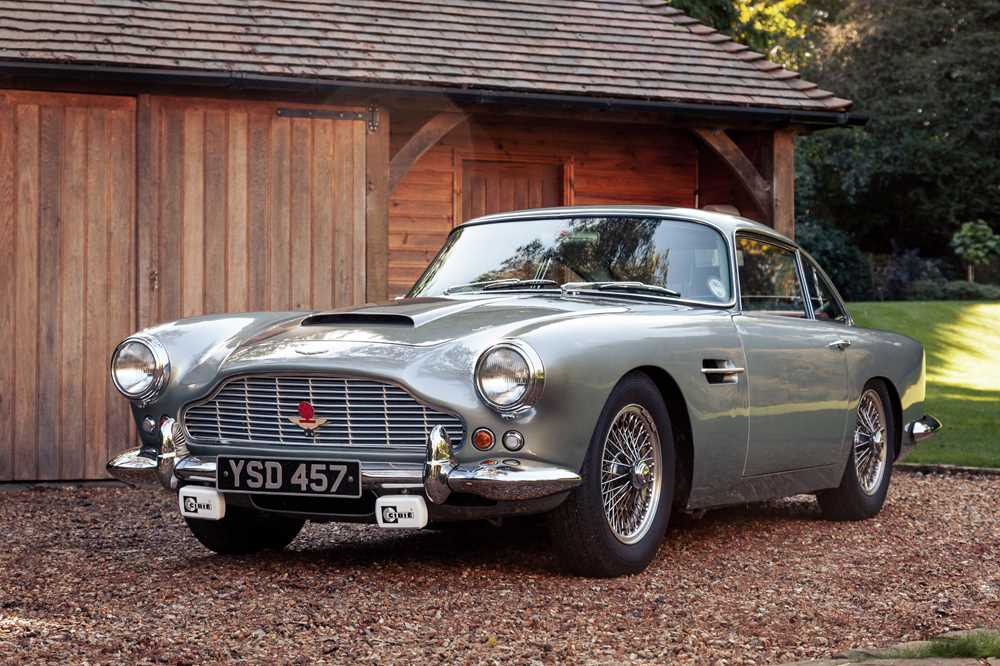 Arguably the zenith of DB4 evolution, the so-called ‘Series 4’ variant was introduced in September 1961. Some three-and-a-half inches shorter, one-and-a-half inches lower and several hundred pounds lighter than its ‘Series 5’ successor (or indeed the DB5), the ‘Series 4’ sported a revised radiator grille design with seven vertical bars and a sleeker, reprofiled bonnet scoop (both features which endured up until the end of DB6 production). An oil cooler became standard on the DB4’s Tadek Merak designed DOHC straight-six engine which could also be had in ‘Special Series’ tune for the first time. As well as an extra (third) SU carburettor and boxed plenum chamber, the 3670cc unit benefited from an improved inlet manifold, higher compression ratio (9:1), revised distributor advance curve, special pistons, larger inlet / exhaust valves and hotter plugs. Utilising the same ‘big sump’ bottom-end as its lesser siblings, the enhanced powerplant was credited with developing some 266bhp and 255lbft of torque (an increase of 26bhp and 15lbft respectively). Bringing a welcome extra dose of performance, it was allied to four-speed all-synchromesh manual transmission with optional overdrive. Short-lived, just 185 ‘Series 4’ cars are understood to have been made between September 1961 and October 1962 plus a number of Special Series-equipped Vantage models.

According to its accompanying copy build record, chassis DB4/822/R was supplied new via Callanders Garages Ltd of Glasgow to Andrew Whyte Esq. of Tudor House, Skelmorlie. A member of the Whyte & MacKay whisky dynasty and a petrolhead to boot who had previously owned WO and Derby Bentleys, Mr Whyte specified the Aston Martin in the handsome combination of Snow Shadow Grey with Red leather upholstery. Fitted with a replacement gearbox, overdrive and 3.77:1 rear axle under warranty when it was six months’ old, the DB4 is understood to have remained in Scotland until the mid-1970s. Reportedly treated to major engine and gearbox overhauls during May 1988 at circa 80,000 miles, the four-seater was purchased from Hexagon of Highgate by Merrick Edwardes the following year. Benefiting from a rear axle rejuvenation and DB5 brake calliper upgrade at an indicated 94,000 and 95,000 miles respectively, the Aston Martin then passed to collector David Duffy in 1998. A keen historic racer not to mention a former Connaught Grand Prix car and Jaguar D-Type custodian, Mr Duffy was keen to enhance the DB4’s performance and roadholding. To this end, he had marque specialist Excalibur Engineering refresh the steering, uprate and lower the suspension all-round (including the fitment of a Harvey Bailey handling kit and Koni shock absorbers) and upgrade the engine to ‘Special Series’ / 4 Litre specification.

A friend of Mr Duffy’s since their university days, the vendor became the Series 4’s sixth registered keeper in 2001. As well as enjoying ‘YSD 457’ on the 2003 Scottish Malts and 2004 Irish Trial events organised by HERO, he took it on various Continental sorties including trips to Le Mans and Scandinavia. Progressively improved, the Aston Martin gained a stainless steel exhaust system, full flow oil filter, stainless steel brake calliper pistons and new Turrino 16-inch wire wheels. With Mr Duffy continuing to oversee the DB4’s maintenance, it was again entrusted to Excalibur Engineering for a photographically documented chassis restoration in 2012 (£31,073.72). The same year seeing its headlining renewed and fresh tyres fitted (£3,614.08). Returning to Excalibur Engineering during 2017 for a thorough engine overhaul, the four-seater also benefited from a Borg & Beck clutch conversion, engine bay refurbishment and replacement brake servo (£36,723.36). Having covered a scant 500 miles since this work was completed (the odometer currently shows some (1)18,100 miles), ‘YSD 457’ started readily and sounded decidedly healthy during our recent photography session.

Pleasingly retaining its original Red leather upholstery and engine (number 370/847), the still Snow Shadow Grey-hued Aston Martin remains highly presentable. Indeed, when asked to value chassis DB4/822/R in 2018, Alec Slade of Excalibur Engineering commented as follows: 'Due to the exceptional condition of the vehicle including a complete chassis restoration which encompassed the engine compartment; I consider its value to be £350,000'. A true driver’s car, this subtly enhanced Series 4 has some claim to being - revered GT models aside – the ultimate DB4. Offered for sale with V5C Registration Document, copy build record and large history file.