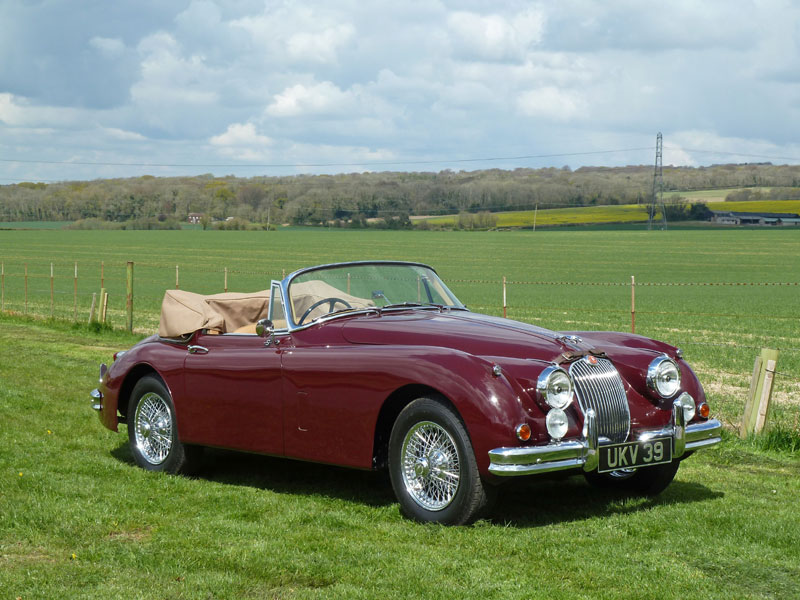 This original right hand drive Jaguar XK 150 is one of the exceptionally rare S variants fitted with the 3.4 engine, and the highly practical Drophead Coupe body style. It is believed that just 104 versions of this model were made, with the right hand drive examples making up a very small proportion of that number.

The Jaguar Heritage Production Record Certificate on file states that this fabulous car was manufactured on May 6th 1959 and the original colours were Imperial Maroon paint with Biscuit interior trim, and a Sand coloured folding roof, the same wonderful colours in which we find the vehicle finished today. The Certificate continues to state that the car was originally supplied by one of the largest dealers of the time, Henlys of London, and was allocated for Personal Export Delivery for sale to a Major J. M. C. Plant. Major Plant was apparently stationed somewhere in Germany and the car was registered (presumably by the Export Department at the Browns Land Factory) with the Coventry number plate of 'UKV 39', the registration which the car still proudly wears.

It is unknown when the car was restored, but it is presumed to have been done to a very high standard in the 1990's by a company called CarPoint, as under the bonnet there is a plaque stating "restored by CarPoint", who appear to be based near Stuttgart in Germany. It is possible therefore that the car remained in Germany until at least the 1990's either in the care of Major Plant, or subsequent custodians after Major Plant's ownership. What we do know, is that in January 1999 the car was registered with the DVLA as 'WSJ 809', and shortly afterwards in April 1999 it was registered in Guernsey as '36992'.

The car remained in Guernsey until November 2009 when it was acquired by a resident of Jersey (the vendor). He tasked a well known Jersey restoration workshop to "Re-commission vehicle after a laid up period". The workshop proceeded to carry out many routine repairs during the next few years and in July 2014 the 150 was exported from Jersey by the owner and brought to England, where it was re-registered in England and re-united with its original 'UKV 39' number plate. Highly regarded Jaguar XK specialist Twyford Moors of Hampshire then carried out a thorough service in early 2016 with the in-depth work totalling just over £4,000.

The history file contains numerous invoices for the works mentioned above, the Jaguar Heritage Production Certificate, a green Guernsey Registration Book, and Export Certificates for both Guernsey and Jersey. The odometer displays just over 10,000 miles, and it is thought that this is the distance the car has covered since its restoration.

On our short drive of the car to take the photographs we felt it performed superbly, and with the benefit of hydraulic power steering, manoeuvrability was eased. The vendor describes this beautiful and rare original right hand drive XK150 3.4 S as being totally correct in that its chassis, engine, and body numbers all match those stated on the Heritage Certificate, and that the car is in 'very good to excellent' condition. These cars offer a rare combination of superlative looks and usable high performance, and with the benefit of power steering, a CD changer, and what appear to be heated seats, this one would be at home both on the open road or a mountain hair pin. It is time to plan that European tour!
Share: