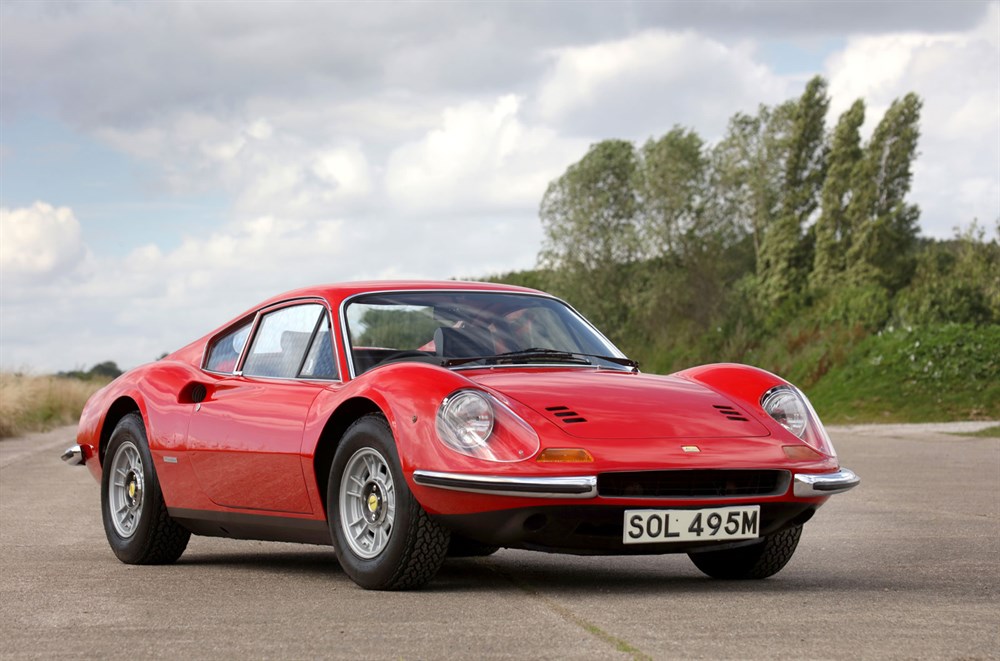 Heavily influenced by the Dino 206 GT Berlinetta Speciale concept car (a thinly disguised 206 S sports racer) which Pininfarina had unveiled at the 1965 Paris Salon, the roadgoing Dino 206 GT debuted in Turin two years later. Compellingly curvaceous and bodied in aluminium over a tubular steel chassis frame, it seemed a fitting tribute to Enzo Ferrari's late beloved son Alfredo. Boasting all-round, independent double-wishbone suspension, Koni shock absorbers, anti-roll bars and four-wheel disc brakes, the newcomer was the first Maranello production design to feature either rack-and-pinion steering or a mid-mounted engine. Although, the 1987cc 'quad-cam' unit in question was the work of Franco Rocchi, its inspiration came via Alfredo and the legendary Vittorio Jano (who between them had convinced Enzo Ferrari of the inherent engineering merits behind a compact V6 as early as 1956). Developing a quoted 180bhp at 8,000rpm, the free-revving powerplant was allied to five-speed manual transmission and promised a 140mph plus top speed.

However, despite sensational looks and inspired, race-bred handling, the announcement of an even faster variant at the March 1969 Geneva Motor Show saw 206 GT production cease in August 1969 after just 152 cars. Thankfully, its successor - christened the 246 GT on account of its larger 2418cc engine - retained the same sublime Pininfarina styling (albeit draped over a 60mm longer wheelbase). With a quoted 195bhp and 166lbft of torque on tap, it was reputedly capable of 151mph and 0-60mph in 6.8 seconds. To ease manufacture, the revised two-seater utilized a cast-iron cylinder block and steel bodywork. Inheriting its forebear's cabin architecture complete with steeply raked bucket seats, aluminium fascia, suede-topped dashboard and 'chrome fingered' transmission gate, the model typically rode on Cromodora 'bolt on' alloy wheels. Phased in around mid-1971, the final Series III or Tipo E Dino benefited from revised gear ratios and a different fuel supply system (though, little else was changed). Regardless of Series / Tipo designations, just 488 right-hand drive 246 GTs were UK supplied.

The paperwork on file for this extraordinary Dino stretches back to a copy of its original factory order form, No. 652. The request for 'One "Dino" 246/GT - Coupe Gran Turismo automobile, complete with five wheels and tyres, toolkit (RHD), electric windows and Daytona type central seat panels', to be finished in 'Ferrari Light Red 20.R.190 Salchi' with 'Black 161' (vinyl) upholstery was placed by Maranello Concessionaires Ltd of Surrey on 12th November 1973.

Stamps in the Dino's original Warranty Card booklet show that it had Coupon A and Coupon B services carried out by supplying dealer Dick Lovett Specialist Cars on 24th July 1974 (amazingly a tax disc holder from the same company is still affixed to the windscreen). Purchased by the vendor's late husband on 10th January 1976 for £7,000 - a substantial uplift on its new price but understandable given the ultra-low warranted mileage of 1,716 - the 246GT's sale coincided with Mr Hoskison and his brother injecting further capital into the Bee Bee Bros motorcycle racing team (their grandfather had been a constructor in his own right but went bankrupt in 1922).

A general report on the Dino issued by the respected Kent-based marque specialist in September 1990 noted that: 'During the course of the work we found the concealed areas, fittings and fixings to be in a condition expected of a car which had a recorded mileage of 7,500 miles . . . The car body is in excellent condition, still fitted with the original sills . . . The replaced tyres were Goodyear G800 GP. We believe these may be the original factory fitted tyres, although Michelin XWX were more common. The original tyre wear was limited, replacement considered necessary in view of their likely age . . . A compression ratio test gave high, even readings consistent with a low mileage engine'.

Mr Boland paid £100,000 on March 14th 1990 to acquire Chassis 07420 but kept it for less than two years. Apart from having the Ferrari fettled by Fosker Engineering, he also confirmed its early history (and warranted low mileage) via correspondence with Mr Hoskison. Re-entering the current family ownership during February 1992, the 246GT has been in their care for forty-one of its forty-five years. Garaged alongside various significant motorcars, including one of the four alloy-bodied, right-hand drive Ferrari 250 GT SWB made (Chassis 3067GT), the Dino earned a special place in their affections and has outlasted all its other stablemates.

Entrusted to Graypaul Nottingham on 24th September 2018 for a thorough service, Chassis 07420 also had its fuel system flushed, brake system fettled and cylinder head gaskets replaced (the latter an engine out job). The work was completed at 9,968 miles and cost £14,091.76. Now showing just 10,000 warranted miles to its odometer, the Ferrari has never been allowed to deteriorate to the point of needing restoration. Although it has received remedial paintwork over the years, the 246GT has yet to be fully resprayed. The inner sills and transmission tunnel still wear their original polyethene protective covers from the factory. The Daytona Seats (or 'Chairs') and 'mouse fur' dashboard show little sign of fading and the instrument binnacle remains sharp and crisp.

The headlamp covers were fitted by Fosker Engineering in 1990 but aside from the addition of a battery cut-off switch they remain the only known modification from standard. A reference car that still has that air of factory fit and finish about it which so many restored examples lack, Chassis 07420 is accompanied by its original owner's wallet (handbook, spares catalogue, warranty booklet), jack, tool roll, copy factory order form, first MOT certificate (and numerous subsequent ones), assorted period photos and an extensive history file.

A surely unique opportunity to acquire a rare right-hand drive 246GT (1 of only 488 UK supplied cars) that has covered a mere 10,000 miles from new and been treasured by the same family for forty-one of its forty-five years.
Share: