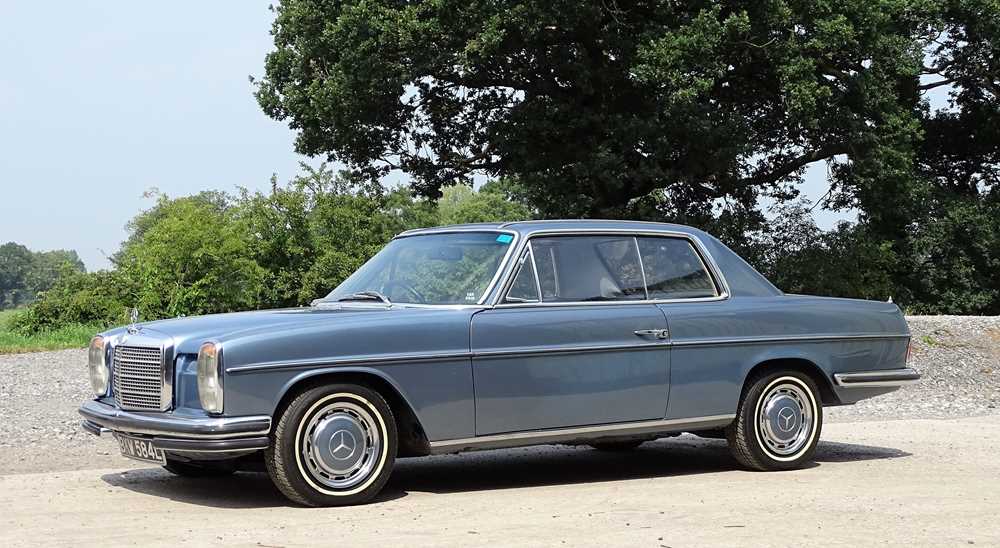 According to its accompanying original maintenance booklet, ‘BKW 584L’ was supplied new by C. Sidney Ltd of Bradford to J.W. Pickles & Son Ltd of Ossett on April 6th 1973. Sold to S.F. Osborne Esq. of Welwyn some fourteen months later for £3,900, the Mercedes-Benz was to remain in his care for twenty-years. Subsequently purchased by J. Odling Esq in 2003 from his brother-in-law who had been a friend of Mr Osborne, the 280 CE was treated to a full, glass out, opening panels removed respray some five years later. Passing to the current (fourth) registered keeper during August 2017, the Coupe was serviced by SPR Autos Independent Mercedes Specialists the following November at a cost of £1,378.44. Barely driven since then, ‘BKW 584L’ started unaided upon inspection but would benefit from some recommissioning. Entrusted to Bespoke Car Interiors of High Legh for £2,220 worth of interior smartening in October 2019 (headlining, carpets, spare wheel cover etc), the Mercedes-Benz appears to pleasingly retains its original Blue upholstery. Sporting a factory-fitted sunroof, the 280 CE also boasts uprated W123-series front disc brakes and a custom longlife exhaust. Offered for sale with history file including the aforementioned original maintenance booklet (stamped up to 48,574 miles), sundry invoices dating back to the mid 1980s, copy despatch document, Mr Osborne’s 1974 bill of sale, Autocar road test reprint, original plastic wallet and numerous old MOTs.

Penned by the celebrated French designer Paul Bracq, the Coupe version of the Mercedes W114 was unveiled in 1969. Of pillarless construction, it featured windows that could be fully lowered for optimum open air motoring and a notably longer boot lid than the related Saloon. There was the choice of 2.5 (250) or 2.8-litre (280) straight-six engines coupled to a four-speed automatic transmission. Just 67,048 such Coupes were produced prior to the cessation of production in 1976, 24,669 of which had the larger engine.