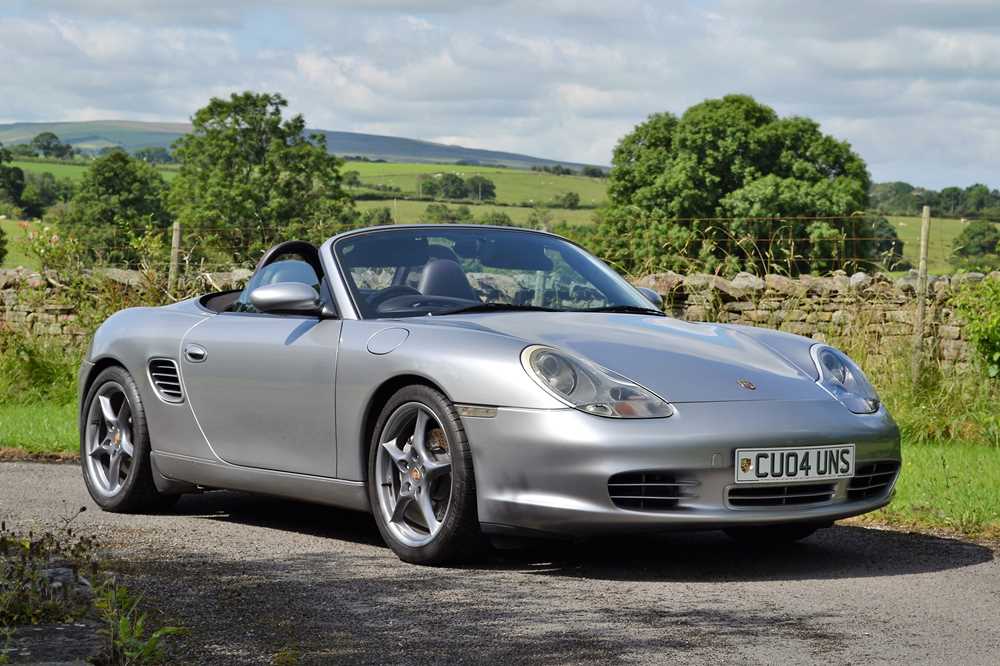 The chic two-seater Boxster was unveiled in late 1996 and was the first road-going Porsche since the 550 Spyder to be designed from scratch as a Roadster. It was penned by Dutch designer Harm Lagaay, who was also primarily responsible for the 968, 993, Cayenne, 996 and Carrera GT. The Boxster sobriquet was a contraction of 'boxer-engined roadster' - the newcomer being a convertible with a water-cooled flat-six engine mounted amid-ships. With the limited-edition S model, Porsche engineers increased output from the 3.2-litre engine to 264bhp, whilst the sonically tuned exhaust provided a soundtrack matching the performance. A shorter gear change and a slightly lowered suspension set-up add to the exciting mix.

This Boxster S was manufactured in 2004 and was supplied new to the United Kingdom on the 8th of June 2004 by the Porsche Centre Exeter. Out of a total production run of 1953 Anniversary examples produced in homage to the debut of the original 550 Spyder, just 150 S 550s were built to right-hand-drive specification as offered here. Fitted with the 3179cc flat-six engine mated to the desirable six-speed manual transmission, the 550 is finished in GT metallic Silver with Cocoa leather interior upholstery.

‘CU04 UNS’ has covered just 72,269 miles (at time of consignment) and has only four former keepers from new. Well-specified from factory with the optional extras of cruise control, CD compartment, antenna and speakers, special order centre console, PCM with navigation and telephone module and a Bose sound system.

Offered with the original book pack complete with the driver’s manual, PCM guide, stamped service book and many others, the service book displays a total of seven service records (the last completed at 68,981 miles by Porsche Centre Portsmouth), four brake fluid changes, two condition reports and two airbag system checks, all provided by main dealers or Porsche specialists. Subject to new brake discs and pads in 2016, the Boxster 550 is further accompanied by a history file that comprises current V5C, many past MOT certificates and a large selection of invoices.