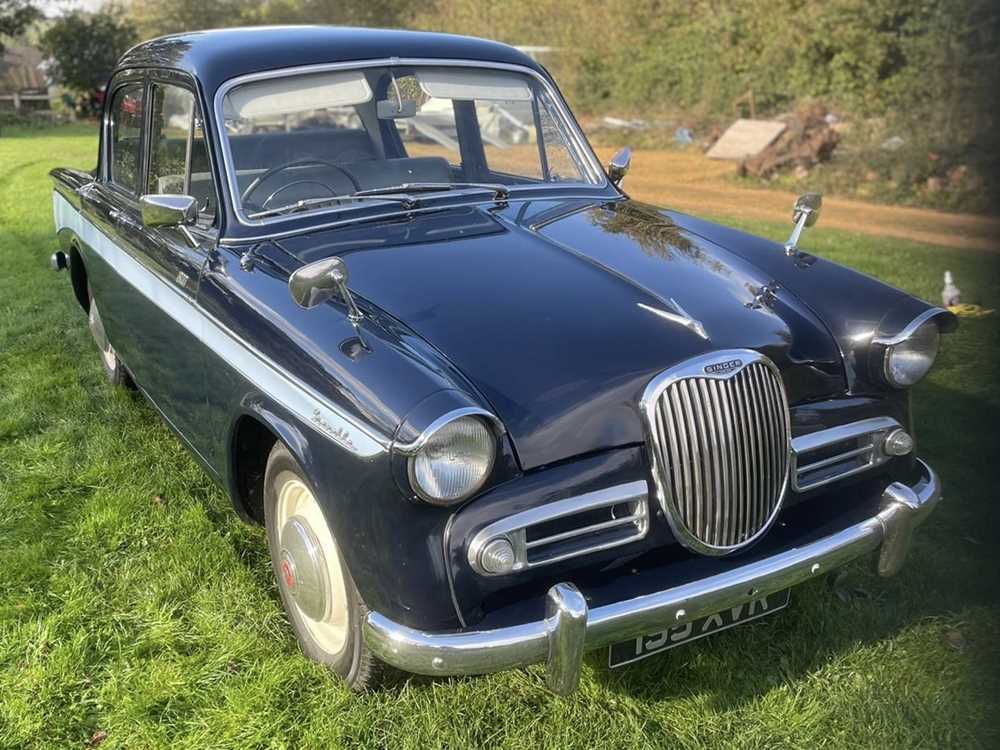 The Gazelle was the first Singer to be produced following the take-over of the Singer Company by the Rootes Group in 1956; it was a version of the mainstream Hillman Minx differing mainly in retaining the Singer overhead cam engine. Externally the only significant difference was a restyled nose, based around a traditional Singer grille. The body style followed by the Gazelle between 1956 and 1967 came to be known as the ‘Audax’ body, with significant input from the American based Loewy design organisation, highly regarded at the time partly on account of Loewy's input to several iconic Studebaker designs. In line with Rootes Group policy, the car kept getting small upgrades each with a new designation. In September 1958 the car became the III, received better seats, now enhanced at the front by a folding central arm rest and new duo-tone paint became available with this upgrade. The IIIA of 1959 gained small tailfins and a larger windscreen. The engine was upgraded with twin Solex carburettors replacing the single Solex, distinguishing it from the Minx, and lifting output to 60bhp. Home market cars got a floor gearchange and as well as overdrive, Smith's Easidrive automatic transmission also became an option. The 1960 IIIB received a new back axle featuring a hypoid bevel in place of the former model's spiral bevel. A larger engine of 1592cc developing 53bhp was fitted to the July 1961 IIIC. The VI was the last and rarest of the ‘Audax’ Gazelles, the engine was all-new with a five main bearing crankshaft and capacity of 1725cc at first developing 65bhp but this was later reduced to 59bhp.

Originally registered on the 7th of June 1962, this Singer is powered by the aforementioned 1.6-litre straight-four engine mated to the manual gearbox. Finished in the attractive colour combination of two-tone Blue the Singer has covered just c.80,000 miles from new, with a speedometer change at 70,000 miles (although the original unit has been recommissioned and is with the car). Showing five former keepers on HPI, ‘195 XVR’ benefitted from sill and floor restoration work in 2008 (photographs provided with the car) and recently has been the beneficiary of new steel front wings, door bottoms and rear wheel arches, as well as recent new tyres. Offered with a history file including a large selection of MOTs, past invoices, owners handbook, workshop manual and a letter from the original owner.