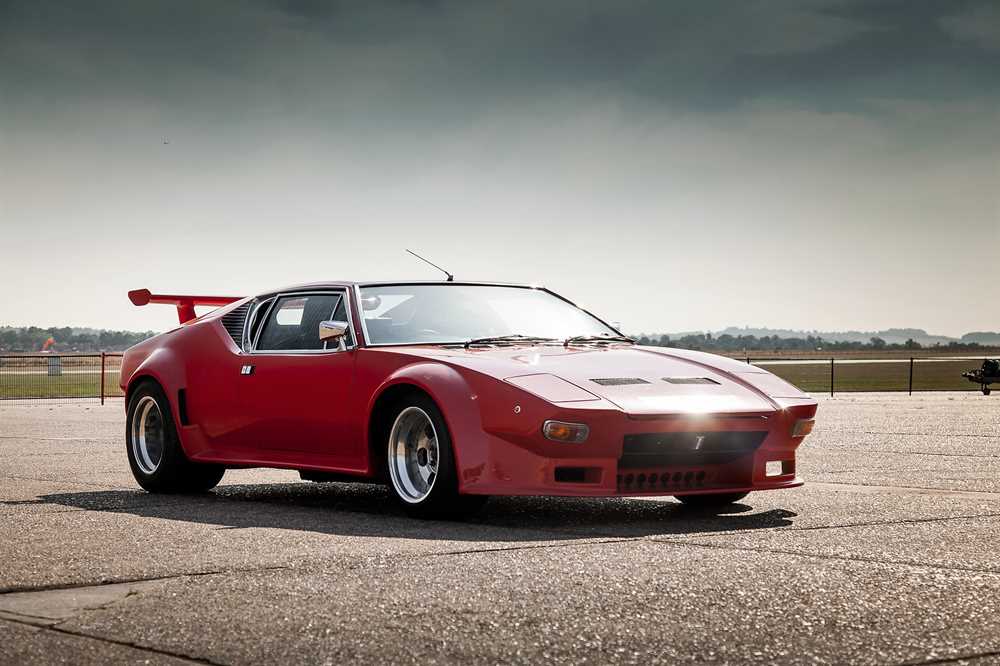 Given the renown his company would achieve for balancing race engine crankshafts (especially in NASCAR), it is perhaps no surprise that the first owner of chassis THPNUY04621 - Trevor Wilkinson of Wilkinson Dynamic Balancing – enhanced its performance capabilities. Taking delivery from Modena Concessionaires Ltd of London on May 3rd, 1973, he kept the modified De Tomaso for seven years before selling it to Worcestershire businessman Richard Egginton. A keen amateur racing driver who later campaigned various Porsches and remains a director of G.V. Racing Limited, Mr. Egginton initially used the Pantera in hill climbs and the occasional race event. He then decided to take things more seriously and uprated the two-seater accordingly. The front air dam, rear wing, side skirts and bulging wheel arches all followed ‘Group 4’ practice allowing the fitment of wider Compomotive split-rim alloy wheels/tyres. A separately adjustable dual-circuit braking system was added as were new upgraded suspension components and Koni adjustable shock absorbers. Entrusted to original owner Trevor Wilkinson for further development, the Ford Cleveland 351ci (5.8 litre) engine exhaled via a bespoke ‘bundle of snakes’ exhaust balanced to the firing order with each port mated 180 degrees to its paired cylinder. Remaining in situ today, this intricate system necessitated the removal of the air-conditioning unit. The fuel tank was relocated to the front boot with its place being taken by an oil cooler radiator and pump (an added bonus being improved weight distribution). A competition clutch linked the ZF five-speed transaxle to the fire-breathing V8 and a high-speed water pump supposedly prevented cavitation above 6,000rpm!

Still in motorsport guise when the vendor acquired it during 2012, chassis THPNUY04621 had been partially dismantled and not turned a wheel in over twenty years. Deciding to make the Pantera road legal once more, the seller called upon the assistance of De Tomaso clubs on both sides of the Atlantic, marque specialist Three-Point-Four and Track-V-Road. The Ford Cleveland 351ci engine was coaxed back into life relatively easily but found to be far too highly strung for street use. In trying to decide upon a suitable (milder) camshaft, the seller discovered that the V8 boasted 4V D1AE 1974 NASCAR cylinder heads (complete with 55cc combustion chambers), solid tappets, dished pistons and a 10.22:1 static compression ratio. Detuned somewhat in the interest of drivability, the mid-mounted powerplant was treated to the following new components: Crane 284 duration camshaft, Cloyes TruRoller chain set, Summit Racing 750cfm carburettor (with electric choke and annular boosters), Edelbrock Four Plane RPM Performer intake manifold (gas flowed from carburettor to valves, etc), Petronix electronic ignition (distributor and coil) and Crane hydraulic tappets.

A lighter clutch was installed with the flywheel being machined to suit and a custom-made clutch operating stop and pull back mechanism added. The latter enables the clutch to release properly (a known Pantera weakness). The clutch master cylinder was renewed as were the brakes and brake pipes. The steering rack was rejuvenated and the front wishbones modified to improve self-centering. Bushes were replaced and a full check of the steering and suspension geometries was carried out. ‘Pop up’ headlights were reinstated albeit using a more reliable Toyota Supra mechanism. The interior was retrimmed in leather (using repurposed Ford Sierra Cosworth seats) and fresh tyres fitted all round (245/40 front and 345/35 rear).

Any UK-supplied, right-hand drive Pantera is a rare car. However, ‘VNP 653L’ is made unique by its intriguing back story and competition modifications. Worthy of close inspection, this outlandish De Tomaso would surely grace any collection of Italian exotica. As anyone who has tracked Iso Grifo prices in recent years will know, interest in Italian-American hybrids is on the rise.