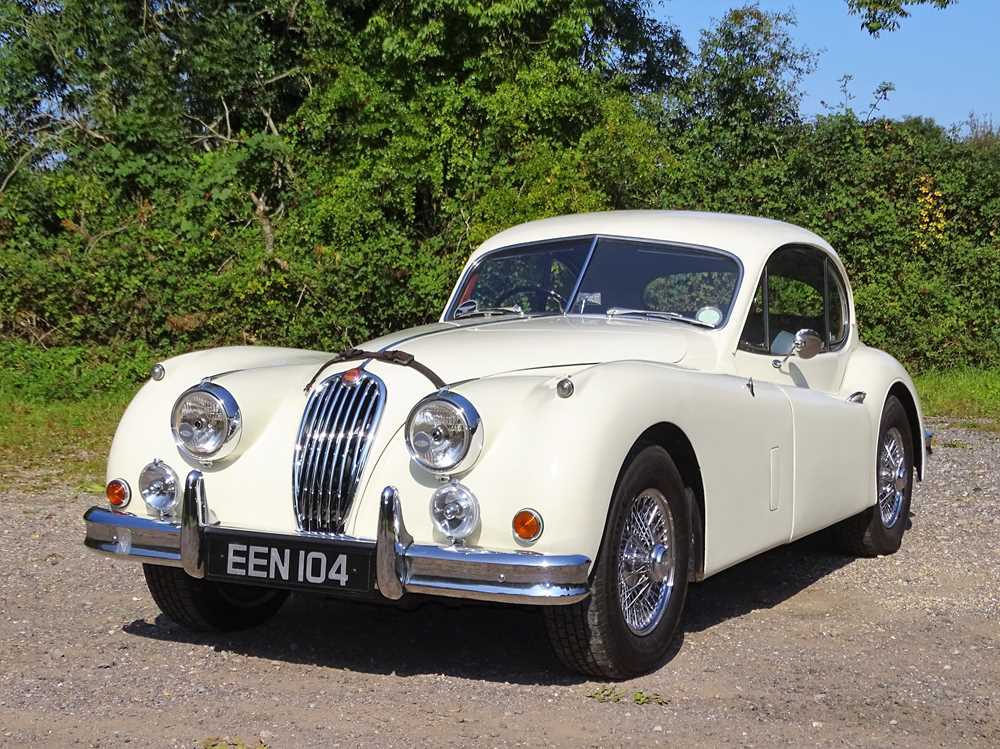 According to its Jaguar Daimler Heritage Trust Certificate, chassis 804456DN was built on October 6th 1955 and supplied new to Harold Hilton of Bury, Lancashire. Equipped with four-speed manual plus overdrive transmission, it is known to have subsequently belonged to D. Higham, R. Mace, A. Millichap, J. Myson, P. Twinley and P. Trill before entering the current ownership during November 2016. The accompanying history file contains invoices dating back to Mr Mace’s tenure in 1974 and shows that Mr Millichap had the Jaguar extensively mechanically and cosmetically restored by Beck Motors Ltd of Sulby, Isle of Man during the late 1980s. Scroll forward a decade or so and Mr Myson commissioned another Isle of Man engineer, J.P.Q. Brew, to sympathetically upgrade the XK140 with a Kenlowe fan, alternator, Vicarage power assisted steering, servo-assisted front disc brakes and electronic ignition. Mr Brew also renewed the gearbox seals, replaced the rear springs and had the original engine (number G5416-8) thoroughly overhauled and converted to run on unleaded by VSE of Llandrindod Wells. A well known member of the XK and E-Type Clubs as well as the proprietor with his wife of Backwater Tours, Mr Trill had renowned marque specialists Twyford Moors improve the wiring and install stainless steel sill covers etc in 2007 at a cost of £2,604.87. That same year also saw the Fixed Head Coupe fitted with a Brantz tripmeter (neatly housed within the glovebox). K&N Classic Cars of Bosham, West Sussex renewed the clutch, flushed the cylinder block / replaced the core plugs and sent the cylinder head to Sigma Engineering for refurbishment during 2012 (the corresponding invoice totalling £3,484.71). Predominantly used for local journeys over the past four years except for a memorable trip to the South of France and back, the Jaguar was treated to new front brake callipers in 2018 and had its coolant hoses replaced earlier this year. A well-developed touring car that boasts matching chassis, engine and body numbers, the XK140 started readily and ran well during our recent photography session. Offered for sale with V5C Registration Document and history file, it completed a 330-mile round trip from the West Country to East Anglia last month without a hitch.