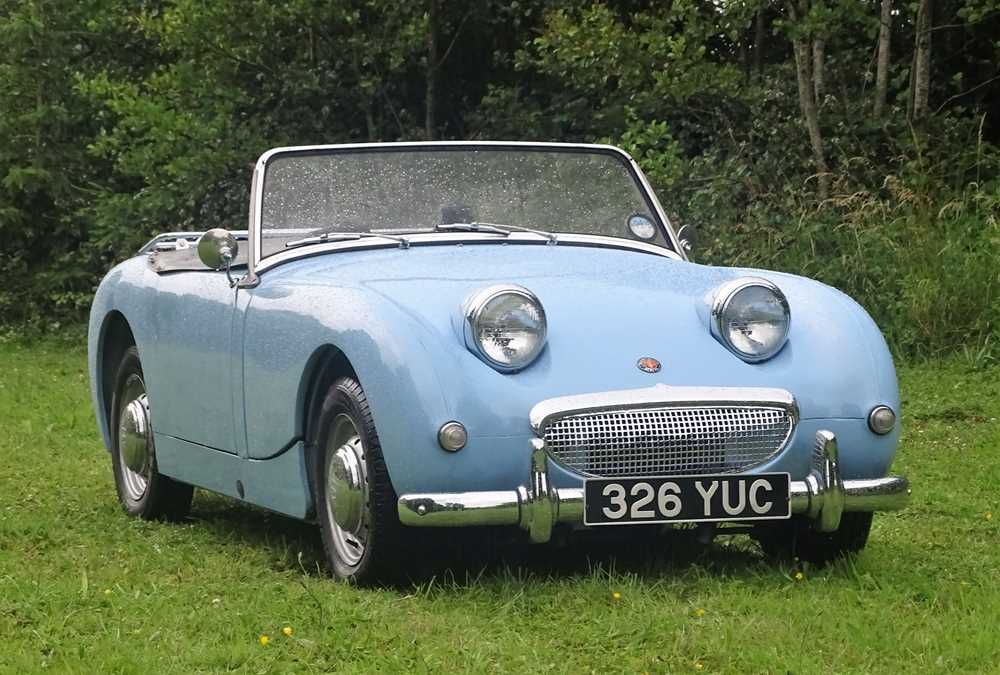 A photocopied British Motor Industry Heritage Trust certificate on file confirms that Chassis AN5/29736 was built on 17th December 1959 and supplied new via Central Garages Ltd of Bradford. Reportedly belonging to the same family from new, the Austin-Healey has benefited from significant past restoration work with numerous accompanying parts bills from Moss Bristol and Meacam Spridgets dated 1999-2000. Passing from father to daughter thereafter, subsequent invoices detail a gearbox refurbishment and cylinder head overhaul (including conversion to unleaded) in 2008 by Meacam Midgets and Hurley Engine Services respectively. Some £2,000 was spent with Bristol Engineering Ltd during 2012-2013 having the Sprite re-trimmed and the fuel gauge repaired etc, while more recent servicing and fettling has been entrusted to Kings Motor Services Ltd of Westbury. The latter replaced the brake / clutch master cylinder and renewed all the wheel cylinders plus fitting new rear tyres and carrying out a general service some 200 miles ago in June 2016 at a cost of £1,092.50. Starting readily upon inspection, this appealing ‘Frogeye’ is offered for sale with full weather equipment (hood, tonneau, sidescreens) and history file.

Intended as a spiritual successor to inexpensive pre-war sports cars such as the MG M-type or Austin 7 Nippy, the Austin-Healey Sprite was launched in May 1958. Fruit of the growing partnership between Donald Healey and Austin's Leonard Lord, its design costs were kept to minimum through some inspired BMC parts bin raiding. Built around a lightweight monocoque, it combined the Austin A35's independent front suspension, four-speed gearbox and quarter elliptic leaf-sprung back axle with the Morris Minor's rack and pinion steering. Powered by a twin-carburettor fed 948cc A-series four-cylinder engine developing some 43bhp and 52lbft of torque, it was capable of over 80mph. Credit for the Frogeye's wonderful styling lies with both Gerry Coker and Les Ireland. For while the former was responsible for the initial sketches (before he left the Healey Company in 1957), it was the latter who so characterfully integrated the fixed head lights (Coker's previous ideas for Porsche 928 style retractable units being rejected on financial grounds). Put on sale for just £669 including purchase tax, the Sprite actually undercut its Morris Minor De Luxe sibling. Rarely before or since has a sports car enjoyed such a large fun-to-price ratio.