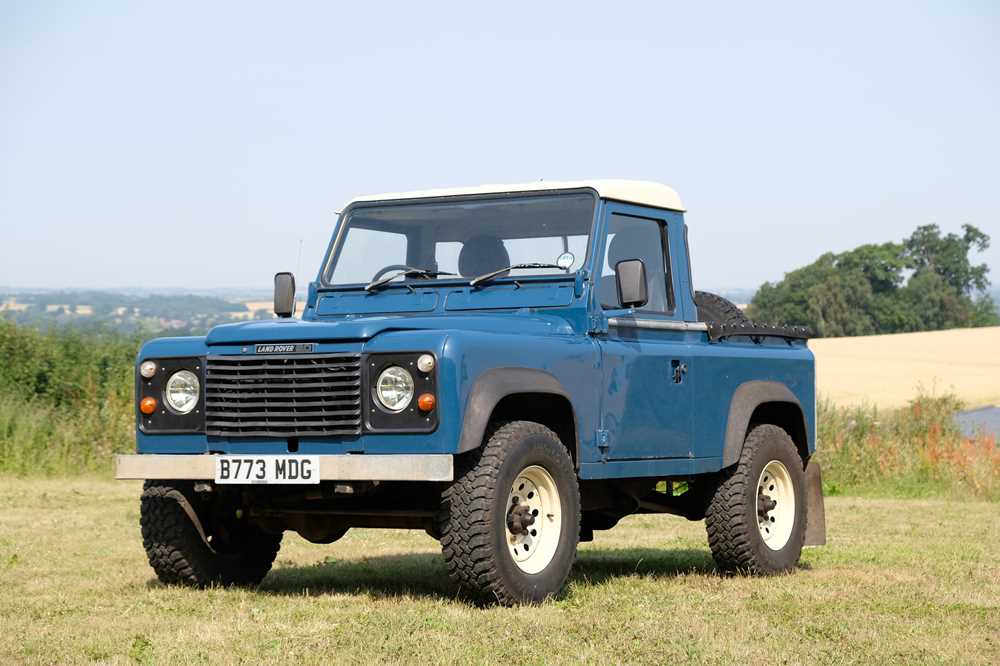 The Land Rover was launched in 1948 and, incredibly, production of the traditional Defender only finished in January 2016 after a continuous run of 67 years. Outwardly, there is little to distinguish the post-1983 vehicles from the Series III Land Rover. Internally, coil springs offered a more comfortable ride and a permanent four-wheel-drive system derived from the Range Rover featuring a two-speed transfer gearbox with a lockable centre differential. A modernised interior and a new series of progressively more powerful and modern engine characterised things under the skin. The Defender was fitted with an all-new 2.5-litre, five-cylinder in-line turbo/diesel engine and is mated to a five-speed manual transmission and is widely considered one of the most popular off-road vehicles of all time.

B773 MDG was one of the very first Defenders ever manufactured, then known simply as the ‘90’. This particular pickup, manufactured in 1984, is presented in a charming blue with contrasting limestone wheels, and features a re-uphostered half-leather interior with heated seats.

B773 MDG has benefited from a number of items including a replacement fuel tank in November of 2020, A service including replacement cambelt and battery in December 2019 and an engine overhaul and respray in 2013 at a cost of over £6,200. Additional specification includes power steering, an Exmoor Trim Tonneau cover, bonnet lock, gun box, full size spare wheel and bonnet lock and the vehicle comes with an MOT Certificate valid until 30 September 2021.

Included with the vehicle are a number of documents including the original service book and manual, as well as a folder including a number of MOTs and previous invoices totalling some £9,800. The vendor rates the condition of the bodywork, engine, electrical equipment, paintwork and transmission and gearbox as ‘Good’ with the interior trim ‘Very Good’, and the odometer currently displays 168,000 miles.