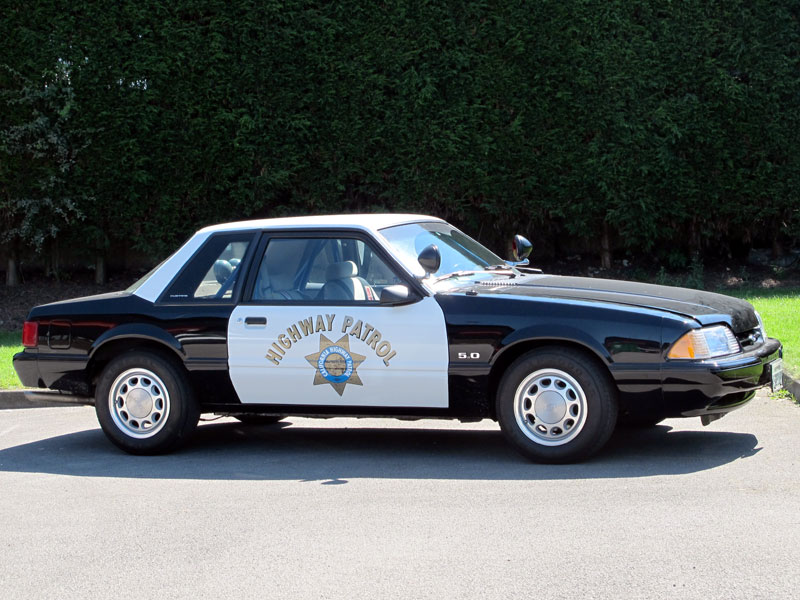 An answer to requests from the California Highway Patrol for a nimble, lightweight machine that could better handle the demands of pursuit driving, the Mustang Special Service Package 'SSP' was produced from 1982 to 1993 by which time it had also found favour with the DEA, FBI and USAF not to mention numerous other police forces. Marketed as the Ford that 'chases Porsches for a living', the newcomer boasted a reinforced bodyshell, heavy-duty suspension and pared-back interior but otherwise resembled a stock 5.0 LX model.

This Mustang SSP is reportedly one of just five employed by 'CHiPs' over a twenty-year period for Emergency Vehicle Operators Course (EVOC) training and demonstration purposes. Powered by a 302ci EFO-HO Interceptor V8 engine allied to five-speed manual transmission, the two-seater's specification includes: driver's airbag, power mirrors, air conditioning, Cypress and Dark Cypress interior trim, bucket seats and 'visibility' light package. Differentiated from its patrol car siblings by a full welded-in roll cage and harness belts, the EVOC machine was most often entrusted to Sergeant Dean Bogois. Bought out of police service after some 27,849 high-speed miles by enthusiast Charles Ricks on February 5th 2002, the Ford is subsequently known to have passed through the hands of: Richard J Fisher of Chandler, Arizona; John P Malloy of Methuen, Massachusetts; and Michael Strinich of Nashville, Tennessee, where it was registered as '92 EVOC'. Treated to a cosmetic restoration and engine overhaul (December 2006 - May 2007) by John P Malloy, the Mustang features a correct-type siren, radio scanner, shotgun holder and external lights. The relevant permissions were sought before re-applying the CHiPs livery and restoration detail is complete down to the installing of new 10-hole wheels and General XP Police Pursuit tyres that are now like hen's teeth to find. Offered for sale with V5C Registration Document (pending) and current MOT certificate.