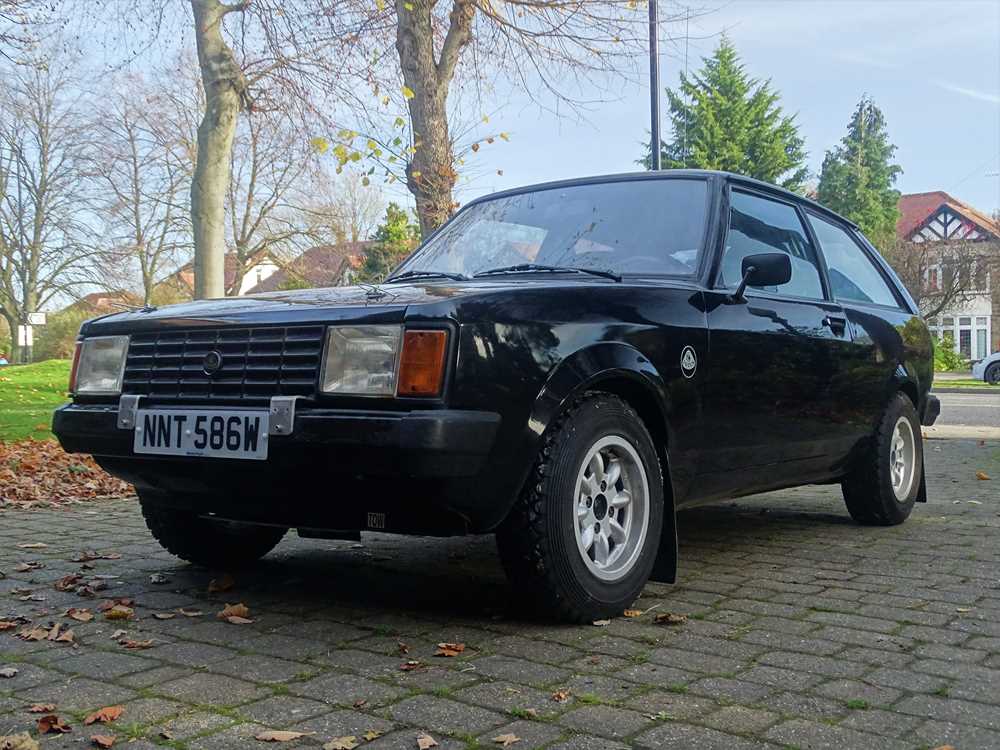 The Talbot Sunbeam-Lotus was one of the most exciting hot-hatches to come out of the 1970s. Commissioned by Chrysler, Lotus was tasked with producing an effective entrant for international Group 4 rallying - to attempt to beat the dominant Ford Escort RS’s. Lotus utilised a 1.6 GLS shell and installed a 2.2-litre version of their 16-valve four-cylinder engine (the 'Type 911', a close relative to the Type 912 found in S2 and S3 Esprits) which was mated to a 5-speed ZF gearbox. Offered only in Black and Silver initially, they launched in 1979, with the high-compression 2174cc twin-cam engine breathed through two twin-choke Dell'Orto carburettors.

Developing 150bhp, the twin-cam engine was very tuneable (up to over 200bhp) for rally use and being rear-wheel drive and weighing only 960kgs, could reach 0-60mph in just 6.6 seconds. The design by Lotus didn’t stop at the engine only however, with the suspension and exhaust system being Lotus’ designs. Immediately proving extremely effective on the international rally stage, the Sunbeam-Lotus finished 1st, 3rd and 4th at the 1980 Lombard-RAC rally, Britain's round of the World Rally Championship. In 1981, the Sunbeam Lotus brought the entire manufacturer's championship to Talbot.

Chassis number T4DCYAL314800 was manufactured in the Linwood plant being finalised on the 6th of March 1980 according to the accompanying Sunbeam Lotus Owners Club Dating Certificate and is understood to have been supplied new to the German city of Aachen in left-hand-drive configuration. Fitted with the aforementioned 2172cc Lotus Type 911 16-valve engine mated to the five-speed ZF manual gearbox, the Sunbeam-Lotus is still finished in the original Embassy Black (albeit without the Grey stripe). Originally fitted with the Grey cloth Lotus interior upholstery, ‘NNT 586W’ now features a rally prepared interior including Sparco seats, roll-cage and Brantz rally meters.

Remaining on the continent until being imported into the United Kingdom in 2015 by the late-vendor, the Talbot-Lotus was retained by him until being offered today, making just one UK keeper to date. The late-vendor, a rally enthusiast and participant, uprated the Talbot-Lotus for use in historic rallying. Restored by him for competing in said historic rallies and competing on a few occasions in events (including as pictured with him at the helm), the Talbot-Lotus entered into dry storage following the vendors passing approximately two years ago until around six weeks previous. Benefitting from mechanical fettling so the Lotus would run and drive, ‘NNT 586W’ is likely to still require some further recommissioning following the period in storage.

Offered with a history file comprising documents regarding the importation and registration; a selection of German paperwork; a few past MOT certificates; the aforesaid Sunbeam Lotus Owners Club Dating Certificate; Dastek Dynamometers report from 2016 and a current V5C document. Interested parties should note that while being registered with the DVLA post-importation to the United Kingdom, the Talbot-Lotus has been registered to state the vehicle service number rather than the chassis number. Furthermore, since the catalogue went to press we have been contacted by the Membership Secretary / Treasurer of the Sunbeam Lotus Owners Club to say that the SLOC Dating Certificate on file was issued in response to a written request and not as the result of a first hand, physical inspection by a SLOC Official.

Please Note: The five spare alloys, spare differential and ten spare tyres are in storage in Buxton but are not present at the venue.

PLEASE NOTE: The late owner of this lot imported it from Europe as a restoration project in 2015. He subsequently obtained a Dating Certificate from the Sunbeam Lotus Owners’ Club which included the following information (our addition in italics):

‘This vehicle has been inspected (from owner supplied photographs) by the undersigned and verified that the original VIN and Service ID tags are present. The chassis number has been re-stamped on the bonnet slam panel; it bears the hallmarks of being a genuine stamp by the Talbot agent in Germany as a result of the car being prepared for competition by them and the original stamp being obscured by the strengthening process’.

On the basis that the car has been (a) used for competition, (b) prepared as such and (c) extensively restored, we do not know whether it retains its original bodyshell or not.