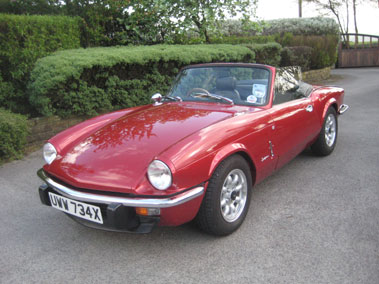 A riposte to the diminutive BMC Spridget duo, the Triumph Spitfire was launched in 1962. Based around a truncated Herald chassis, it was equipped with all-round independent suspension (double wishbone front / swing-axle rear), disc / drum brakes and rack and pinion steering. Styled by Michelotti, its wonderfully sleek two-door roadster bodyshell featured a clam-shell bonnet and decent boot. Evolving through five guises over the course of an eighteen-year production run, the final 1500 variant arrived in 1974. With a reputed 71bhp and 82lbft of torque on tap from its 1493cc OHV four-cylinder engine, the newcomer boasted genuine 100mph performance. Visually indistinguishable from its MKIV forebear save for some minor trim differences, the Spitfire 1500 could be had with options such as a steel hardtop, overdrive transmission and 'luxury' interior (the latter essentially entailing better seat padding). A decent seller on both sides of the Atlantic, the model remained in production until August 1980.

Finished in Diablo Red with black upholstery, this particular 'home market' example is described by the vendor as being in "A1" condition with regard to its engine, four-speed manual gearbox, electrical equipment, interior trim, bodywork and paintwork. Acquired by its previous keeper in January 1993, 'UWW 734X' was then subjected to a very thorough and painstaking restoration which took the best part of a decade to complete. Indeed, accompanying invoices reportedly show that circa £10,000 was spent on parts and materials alone! As well as an extensive chassis and bodywork refurbishment, the Spitfire is said to have benefited from a rejuvenated gearbox, overhauled / tuned engine (Kent fast-road camshaft, Duplex chain, Jigsaw Racing Stage 2 cylinder head), upgraded suspension (stiffer 360lbs front springs, reconditioned rear leaf spring, Spax shock absorbers), improved brakes (GT6 MK3 components) and the installation of overdrive. Cosmetically enhanced with "new interior trim including American Walnut dashboard and door cappings", the two-seater also gained a new hood, re-plated chromework and Supa-light wheels. Deemed to be in A1+ condition when inspected by a representative of the Triumph Six Sports Club during 2007, 'UWW 734X' entered the current ownership the following year. One of the best Spitfires we have encountered, it is offered for sale with Heritage Certificate, restoration invoices, MOT certificate valid until September 2009 and current road fund licence.