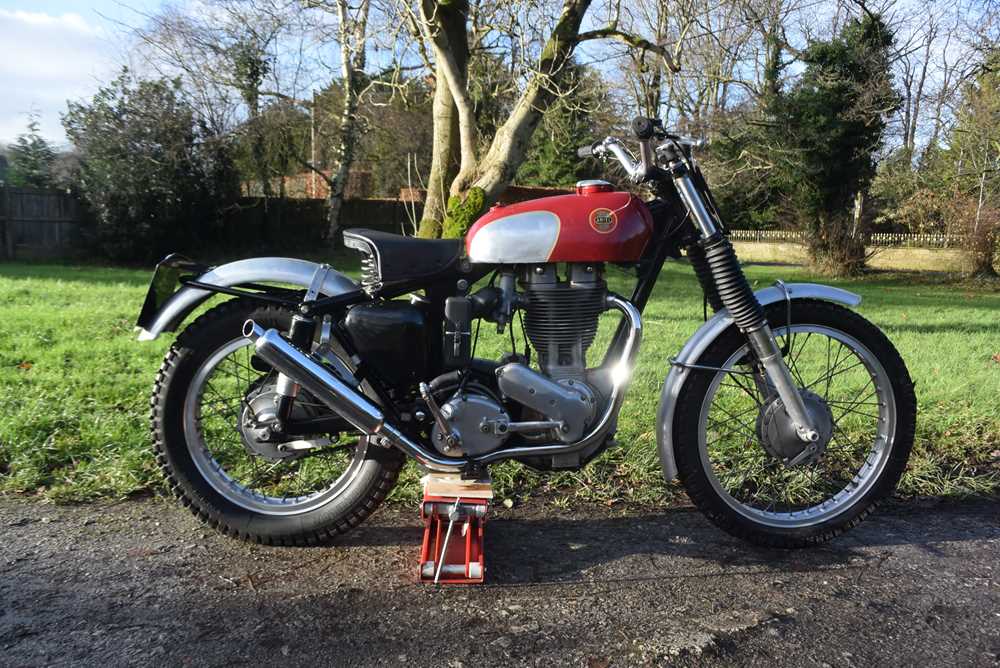 Like a lot of British motorcycle pioneers, Ariel began producing bicycles in the late 1800s eventually progressing onto motorcycles in 1902. After a rocky patch in the 1930s models like the Red Hunter proved to be such a success that it enabled Ariel to purchase Triumph motorcycles, eventually becoming part of the BSA group in 1951. Keen on promoting the company name Ariel introduced a pair of new competition singles, the HS scrambler and the HT trials model for the 1954 season. Both featured engines with Red Hunter type bottom ends fitted with an alloy cylinder and head and four speed Burman gearboxes. Initially, the HT had a rigid frame but when the works team arrived in Scotland for the start of the 1955 Scottish Six Day Trials in May they were mounted on machines that were effectively the prototypes for what is arguably the finest large capacity four stroke trials bike of the day, the HT5. The machines retained the well proven all alloy engine of the HT but a completely new lightweight swinging arm frame of all welded construction was employed. The frame was open at the bottom with the engine, transmission and their associated engine plates effectively forming a structural component of the chassis. The swinging arm was built in the style of those fitted to the road-going machines with an oval section made from two welded pressings per side and was complemented by a set of Ariel telescopic front forks, a light alloy fuel tank and alloy mudguards with replicas soon being made available to the public. As a result of the development work carried out by Sammy Miller on his famous 'GOV 132', such as Norton Roadholder forks and alloy hubs, the big Ariel became the dominant force in trials competition in the late 50s and early 60s. The model fought a valiant rearguard action remaining competitive well into the sixties in the face of an ever growing number of lightweight machines and today is one of the most popular "heavyweight" singles with competitors in pre '65 trials, once again fighting against lightweight Cubs and James two strokes.

This 1958 model has been part of an enthusiast collection of mainly 1950s British off-road bikes with the vendor being a keen trials rider himself in the day. Presented in good condition, it has been subtly improved to remain competitive with modifications copied off Sammy Millers famous 'GOV132' . The front forks appear to be Norton Roadholders and the alloy wheel hubs look to be Ariel Arrow with the rear brake plate on the R/H side incorporating a neat crossover shaft to the brake pedal. There is a slimmed down alloy clutch cover fitted and a recent conversation with Sammy Miller suggested it must be fitted with a narrower possibly Norton clutch. The rest of the bike looks to have remained nicely standard including the original air box and fixed footrest. Not used for a number of years it will need some recommissioning but the engine turns over with compression and everything moves freely. It is road registered and comes supplied with a V5 registration document.