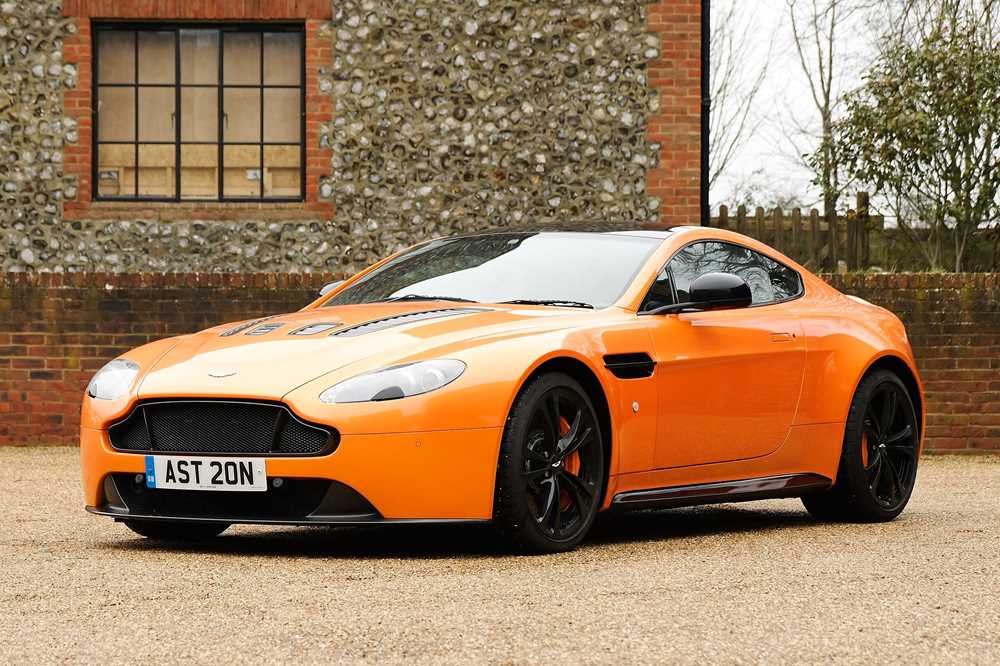 *Please note that the registration does not come with the vehicle.

Following the unveiling of the AMV8 Vantage concept car in 2003 at the North American International Auto Show designed by Henrik Fisker, the production version, known as the V8 Vantage was introduced at the Geneva Motor Show in 2005 for the 2006 model year. The two-seat, two-door coupé had a bonded aluminium structure for strength and lightness. The 172.5 inch (4.38 m) long car featured a hatchback-style tailgate for practicality, with a large luggage shelf behind the seats.

Other additions include a new rear diffuser, a retractable rear-wing which can be raised or lowered and carbon-ceramic brakes. The boot-lid and vented bonnet are also made from carbon-fibre to help decrease the car's weight. In early 2008, Aston Martin's CEO confirmed production of the V12 Vantage RS for mid-2009.

Development prototypes of the V12 Vantage RS appeared in April 2008 before Aston Martin unveiled the production version simply called the V12 Vantage in 2009. By combining its best chassis, from the V8 Vantage, with its most powerful engine, the V12, the result was a rocket-car that could blast the 62mph (100kph) mark in a mere 4.2 seconds. At the time of its launch, it was the best car ever made by the struggled british company, who shared its history with Ford and Jaguar and was finally free of the blue-oval brand in 2007 to become a private limited company.

The design was heavily inspired by the Aston Martin N24 race car with its side sills and the hood’s carbon Fibre vents. With its wide, shell-shaped grille and the lip spoiler under the lower air intake, the V12 Vantage impressed with its aggressive look. The raked windshield and short rear end amplified the sporty look. Inside, there was some race-inspired design, especially with the optional carbon fibre fixed bucket seats. The instrument cluster has been revised with even clearer dials to allow the driver to completely focus on the information being relayed from the car. Under the bonnet, Aston Martin installed a V12 Engine inspired by the DBRS9 Race car. Even though the engine was 100kg heavier than the one on the V8 Vantage, the car was lightened, making it only 50kg heavier than its V8 sibling.

Shortly before Christmas 2009, AM announced a pair of similar special editions based on the Vantage and DBS. The Carbon Black models featured bespoke metallic Carbon Black paint especially formulated with a subtle metallic twist to create a deep rich patina. For the V12 Vantage the iconic Aston Martin side strake was fashioned from rear carbon fiber and complemented with gloss back 10 spoke diamond turned alloy wheels. A bright finished grille and front parking sensors (normally an option) completed the exterior detailing.

Inside, owners were to be greeted to swathes of Obsidian Black leather highlighted with a contrast silver coarse stitch. Lightweight seats formed from Carbon Fibre and Kevlar saving 17 kg over the standard seat also featured together with Piano black facia trim, centre stack and centre console, anodised black tread plates and unique sill plaques built on the carbon theme.

Although it was not a numbered limited edition, the Carbon Black was limited to just a single car per dealer, so they are quite scarce. A second numbered edition of the Carbon Black V12 Vantage was offered in some markets during 2012. The Aston Martin V12 Vantage is tipped by experts to be a future classic, with some stating that the car ‘’ticks all the boxes’’.

Manufactured in 2011, this stunning 6 speed manual Aston Martin V12 Vantage Carbon Black Edition was supplied to the UK, being registered new in January that year. 'KX60 LUY' is a very special and unique car, being the only carbon black edition finished in a colour other than black from the factory. It is rumoured that 'KX60 LUY' started life as a standard carbon black, before Aston Martin decided to send it back to the factory to be painted in Montana Orange and have the interior re-stitched in the matching colour before the car was registered, but this is unconfirmed. What we do know, however, is that immediately this car would become the famous ‘’orange V12 press car’’ and shows orange from new on the V5.

Adding to the interesting life that KX60 LUY has lived, the car also featured in Series 17, Episode 2 of BBC Top Gear. During the Aston Martin Virage test, the car is seen drifting around the track at Dunsfold between a DBS and V8 Vantage. In addition, the car has been regularly filmed and photographed spending its time with the greats, including the Aston Martin One-77, Pagani Zonda PS, Koenigsegg Agera, Ferrari 599GTO, Bugatti Veyron, Lamborghini Murcielago SV and more.

Showing just 25,148 miles on the odometer at the time of consignment and just two previous owners, this car has desirable optional extras including the Bang & Olufsen premium sound system, carbon ceramic brakes and front & rear parking sensors and has also been updated by the current owner as many Aston Martin owners do, with the power pack upgrade by top specialist David Appleby Engineering including ceramic manifolds and exhaust switch at a cost of over £7500; giving the car a believed 550-560bhp and a new clutch and flywheel less than 5,000 miles ago. KX60 LUY has also benefited from a professionally installed facelift using genuine Aston Martin Parts, consisting of the sought after carbon grille and slightly elongated lower splitter, as well as having small accents professionally painted to modernise the appearance and an interior tint on the rear window. It also appears as though the wheels have been refurbished in black at some point during the vehicle’s life. Fitted with a straight-through exhaust, 'KX60 LUY' will comes with a fresh MOT and service and has been looked after by Harwoods in Chichester since it was purchased by the current owner in 2015, with extensive service history. A great opportunity to acquire a unique and interesting modern classic with a great story.