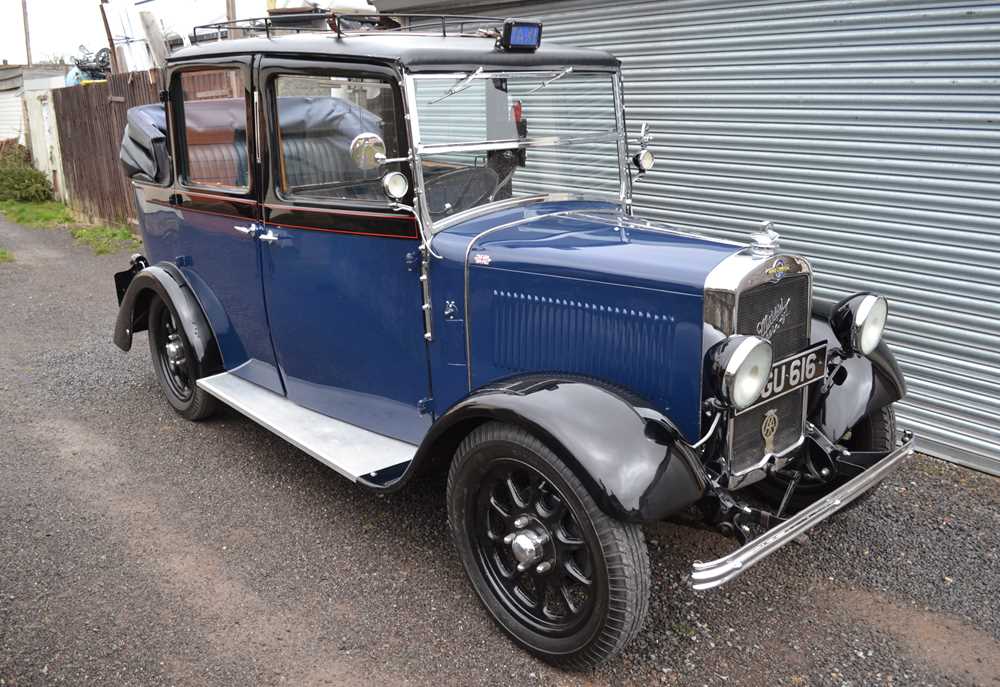 Morris-Commercial began building London Taxis to comply with Metropolitan Police regulations in 1929. The G2SW Super Six was introduced in 1938, and is unusual in being one of only two models of London taxi to have a six-cylinder engine; its predecessor, the Morris-Commercial G2S 'Junior-Six’ being the other. Only three of these six-cylinder rarities are thought to have survived, all of which being G2SW’s. The engine of these taxis was an overhead valve Morris unit mated to a four-speed synchromesh gearbox, a worm drive rear-axle, and rod-operated brakes. With coachwork provided by Morris Bodies Ltd., a branch of the Morris organisation, the standard factory style was a landaulet, and they were trimmed in leather/cloth with leather seat facings. During the Second World War, many are believed to have been requisitioned for work with the Auxiliary Fire Service. This example is one of the only three known to have survived, making the Morris incredibly rare.

‘FGU 616’ was first registered in October 1938 and operated in the London area until December 1956 when the Public Carriage Office deemed that all pre-war taxis were no longer fit for service and it was decommissioned. Understood to have passed through three owners subsequently before being purchased by the vendor in 1981, whereby the Morris was rescued from a lock-up garage in dilapidated condition.

The vendor embarked on a body-off restoration of the Super Six, with the chassis being stripped, shot blasted, and painted. New leaf springs were fitted to the front, and the rear parts recommissioned, with replacement shackle pins and bushes manufactured and assembled. The front and rear axles were dismantled and refurbished, and the brakes were re-lined. The engine was reconditioned including a re-bore, crankshaft grinding, new pistons, and bearings. The block and head were skimmed with new valve seats, valves, valve stems, and springs installed, with the engine being reassembled benefiting from a new timing chain also. Additional items reconditioned comprised the starter motor, dynamo, water pump, distributor, and autovac which was mated to a 12V electric fuel pump. Moreover, the clutch plate was renovated with new cork.

A new wiring loom was produced and fitted, before the Morris was provided with a new ash frame, with the metalwork repaired where required. The taxi further benefitted from new glasswork, re-chroming, retrimmed interior, and a new hood. A comprehensive write-up of the restoration works completed is available on request.

The Super Six benefits from retaining numerous period features including the Metropolitan Fare Regs. Co. Ltd. Fare Meter, Metropolitan Fare Table, and Taxi lights and signage, as well as having a small spares package. Offered with current V5C, RF60 logbook, a collection of past MOTs, and photographs of the restoration. A very scarce opportunity to purchase a pre-war Morris-Commercial taxi.

AUCTION VIEWING
By Appointment Only.

It is the responsibility of the Buyer to ensure that the Lot conforms to the description in the catalogue, H&H strongly recommends viewing the lot prior to bidding as all bids are subject to standard terms and conditions.