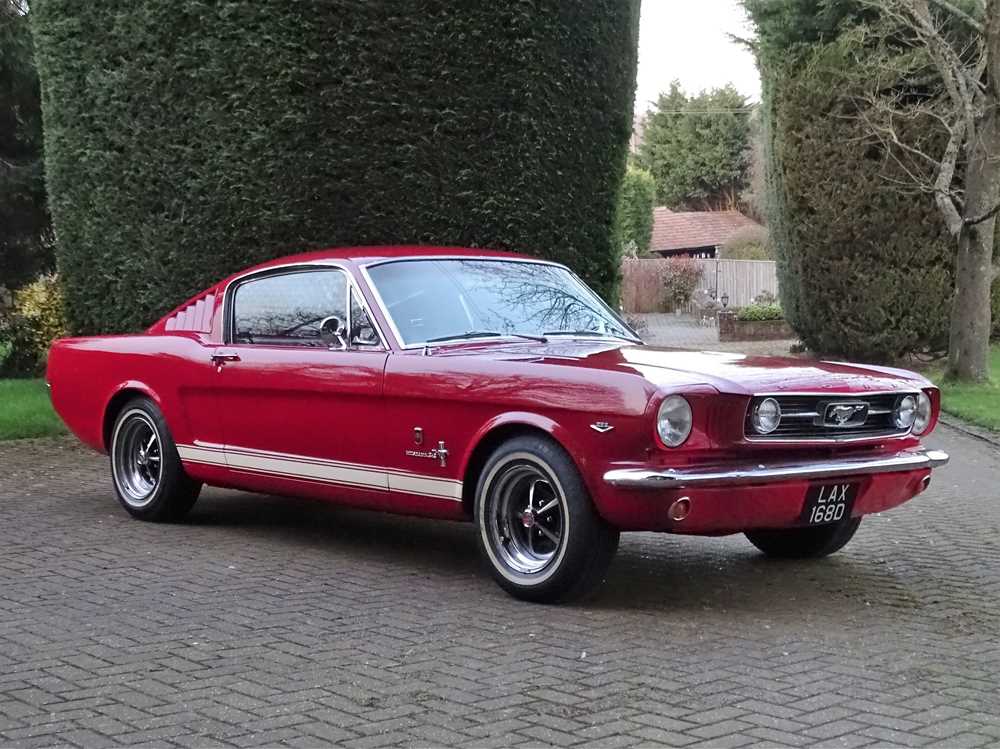 Launched in 1964, the Ford Mustang took America by storm. Here was a car which appealed to the younger generation, something which could be specified to personal requirements and was a world apart from the humble Falcon upon which it was based. With three bodystyles available – coupe, fastback, ad convertible – it was the car that could be all things to all people. Most popular were the V8 engined cars, especially the fastbacks – and it’s these cars whose spirit is embodied in the Mustangs of today.

Manufactured on 18th January 1966 at Ford’s Metuchen, New Jersey plant, chassis 6T09C193359 was originally finished in Candy Apple Red with a Red Crinkle and Red Rosette vinyl interior. Fitted with the Blue Oval’s iconic 289 cu in (4.7 litre) ‘Small Block’ V8 engine allied to C4 automatic transmission, the Mustang was despatched to Buffalo, New York. Resident in Indiana by the time its last American keeper acquired it during 2009, the Fastback was imported to the UK a year later. A well-known Muscle Car Enthusiast and the former proprietor of Barons Auctions, its new owner – Laurence Sayers-Gillan – treated the 2+2-seater to a DeLuxe wood-rimmed steering wheel, ‘GT’ front fog lamps, new floors throughout and fresh carpets etc.
A former classic car dealer, the vendor acquired ‘LAX 168D’ in December 2012 and then again during January 2020. Belonging to a long-term friend and customer in between times, the Mustang was used sparingly for local shows etc and only relinquished due to failing eyesight. The seller’s plans to enjoy the Fastback last summer were thwarted by Covid-19, while this year he is hopeful of undertaking a busy classic racing season; hence the reason for putting the Ford under the hammer.
Starting readily upon inspection and sounding wonderful, ‘LAX 168D’ is said to ‘drive well’ with the vendor further commenting: ‘Whilst a cruiser rather than a racer it is a great experience. The body is excellent with sound arches, rear quarters, torque boxes etc. The interior too is lovely. There is a period-looking but modern radio which will pair with an iPhone etc. The paintwork is bright and very attractive but not perfect. There are some local areas of micro-blistering but this has been completely stable in all the years that I have known the car. In some lights, but bizarrely not all, the doors are slightly darker than the adjacent panels but with no actual bodywork required this would be easy to correct if desired'.