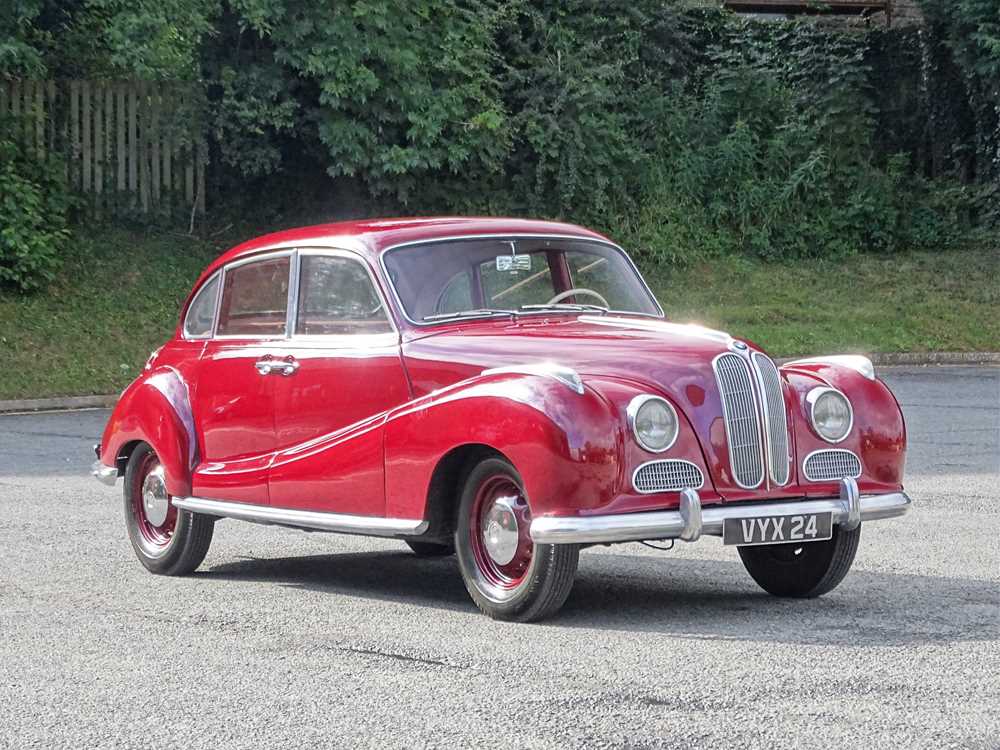 Unveiled at the April 1951 Frankfurt Motor Show, the BMW 501 was priced at 15,000DM which was not only four times the average German salary at the time but also rather more than arch-rival Mercedes-Benz was charging for its equally new 220 model. Penned in-house by Peter Szymanowski, the Bavarian machine’s extravagantly curvaceous steel bodywork soon saw it nicknamed the ‘Barockengel’ (Baroque Angel). Based on a brand-new perimeter frame chassis featuring independent front suspension, four-wheel drum brakes and a type of rack and pinion steering, the luxury saloon was powered by a 1971cc straight-six OHV engine allied to four-speed manual transmission. Reputedly capable of 84mph and praised by the contemporary press for its comfort levels, the BMW proved a slow seller with just 2,125 examples of the initial 501 variant being made between 1952 and 1954.

The presence of numerous period BMW Car Club Bulletin magazines and an invoice for new seals and fuses which were apparently despatched to a Mr John Knowles suggest that chassis 42172 has been in the UK for nigh on sixty years. Acquired by its previous keeper as a restoration project in 1990, the 501 doubtless benefited from his ownership of a firm specialising in the fabrication of commercial vehicle bodies. Entrusted to renowned Bristol and pre-WW2 BMW specialist TT Workshops Ltd for an engine overhaul in 1999-2000 and a gearbox refurbishment during 2002, the saloon started readily and ran well during our recent photography session. Pleasingly retaining a host of original details including its headlining-mounted clock, passenger grab handle, rear ashtray and ‘Baroque Angel’ steering wheel centre, ‘VYX 24’ now presents as an older restoration. A rare sight in Germany and hen’s teeth scarce here in the UK, this voluptuous 501 is offered for sale with V5C Registration Document, instruction manual, period brochure, maintenance diagram, copy TT Workshops bills, sundry other paperwork and fresh MOT certificate.