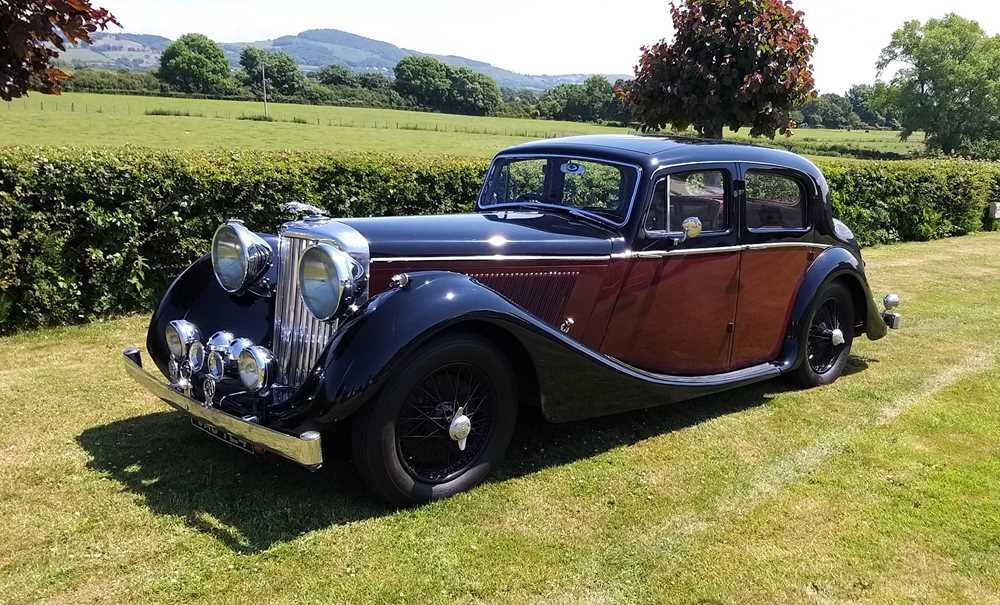 The Jaguar MKIV was Jaguar’s first car following World War II and was produced between 1945 and 1948. Manufactured using a 120” separate chassis featuring beam front and live rear axle suspension on semi-elliptic springs and Girling mechanical brakes, it was offered with three engine variants; four-cylinder 1½ Litre, or six-cylinder 2½ / 3½ Litres coupled to a four-speed manual gearbox. The stylish all steel coachwork was available in four-door saloon or drophead coupe configurations featuring the kind of luxurious interior typically associated with the Jaguar. In addition, it featured distinguishing chrome headlamps and a prominent chrome radiator grill. Very few of these magnificent Jaguars were built for the right-hand markets as steel was being rationed for goods for export.

This desirable 3½-litre, right-hand drive saloon was supplied on 17th February 1947 by official Jaguar dealer, Henlys of London, to a Mr E Paxman. It boasts matching numbers substantiated by the accompanying Heritage Trust Certificate which also confirms that the car was originally finished in Birch Grey. Mr Paxman subsequently exported his beloved Jaguar to the US state of Kentucky where it resided until being repatriated to the UK in August 2002. Our vendor, being the sole attentive custodian for some 17 years, is now reluctantly selling this venerable Mk IV due to reducing storage capacity. Following his acquisition, it has enjoyed regular maintenance, care and dry storage. The car benefits from a professional five-speed gearbox conversion making OAS 724 more suited to modern traffic and road conditions. Additionally, in early 2021 it was subject to a bare-metal repaint costing £5,000 and is now elegantly presented in gleaming Black over Jaguar Maroon. Accompanied by its Heritage Certificate, the V5, a history file containing an assortment of documents, and the original gearbox, should a new owner wish to return it to standard.

This really is one of the nicest MkIVs we have seen, and we highly recommend any interested parties to view the car to satisfy themselves as to its quality.