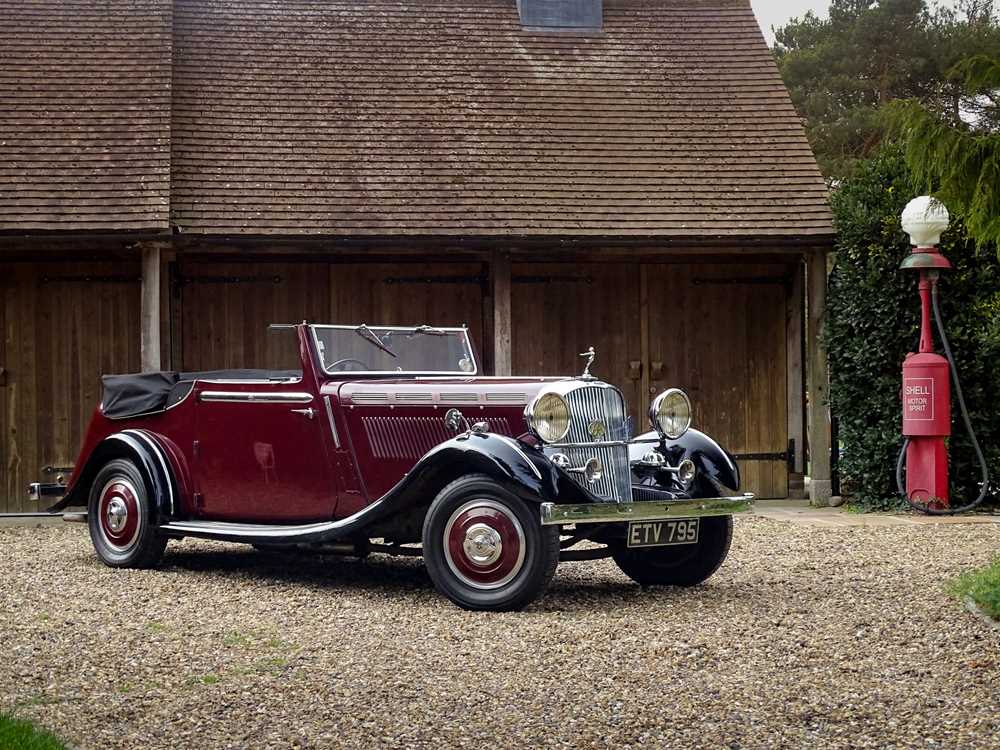 One of just circa eighty examples produced, ETV 795 with its Big Six engine wears attractive drophead coupe coachwork by W C Atcherley of Birmingham and has been in the current ownership since 1979. Currently displaying a credible 104,600 miles on its odometer, the first owner is believed to have been a Mrs Minnie Sheriff, a lady friend of Brough’s. Originally acquired by the vendor in an Alexandra Palace auction, the car has been enjoyed on numerous events including Continental tours to most European countries. Repainted some thirty years ago it has also benefited from a gearbox overhaul by Jeff Moor, carburettor overhaul in 2007, engine overhaul in 2005 and a complete rewire. A stainless-steel exhaust, Kenlowe fan and backup electric fuel pump are fitted and we understand a quantity of spares are available by separate negotiation. Offered with an original sales brochure, VSCC eligibility document, collection of old MOTs back to 1980, V5C, assorted invoices plus brown logbook this finely engineered drophead coupe represents a rare and exciting opportunity for lovers of pre-war performance cars.

The Brough name is better known in relation to motorcycles than cars, as the company produced over 3,000 two-wheelers between 1919 and 1940. Dubbed the `Rolls-Royce of Motorcycles', they were prestige machines that attracted a discerning clientele, and among the many famous Brough owners were George Bernard Shaw and T E Lawrence (`Lawrence of Arabia') who had no less than eight and, of course, famously lost his life on one. The firm's car production was miniscule by comparison and limited to circa eighty-five examples, but they echoed their two-wheeled cousins in terms of quality. Three models were designed but only two made it into series production - the 4-Litre straight-eight manufactured in 1935/36 and the ensuing 3.5-Litre straight six which produced 107bhp giving 0-60 in 12 seconds and a top speed of 90mph. Most Broughs sported striking Drophead Coupe bodies, which were produced by W C Atcherley of Birmingham.