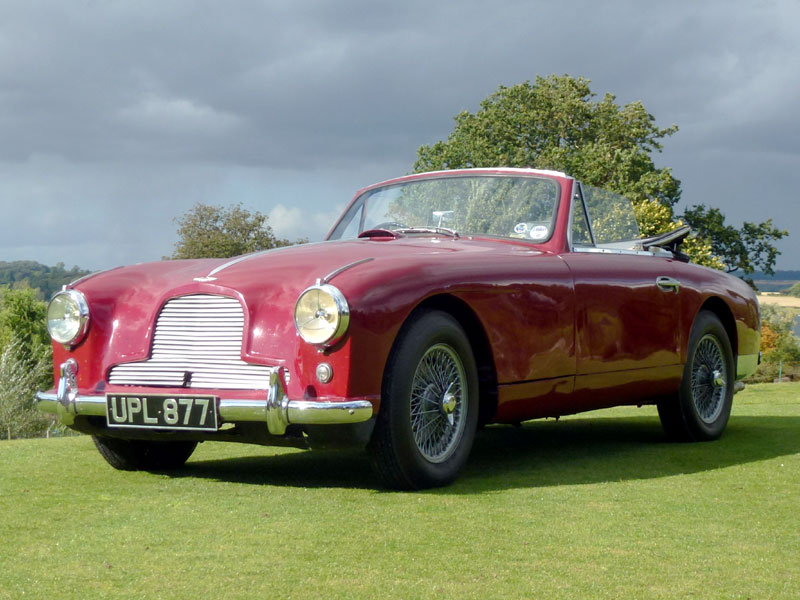 Introduced at the 1953 London Motor Show, the 2+2-seater Aston Martin DB2/4 could be had in two-door Saloon or Drophead Coupe guises. As with its two-seater DB2 predecessor, the whole front body section hinged forward to provide access to the engine and front suspension, which was independent by coil springs and trailing links; that at the rear comprised a live axle with parallel radius arms and coil springs. Braking was by 12-inch Girling drum units all round. Inherited from the DB2 Vantage, the newcomer's straight-six DOHC 2580cc 'VB6E' engine had been designed by Willie Watson under the watchful eye of no less a master than W. O. Bentley. Within a year this high performance unit had been enlarged to 2922cc. Christened 'VB6J', the revised powerplant was credited with developing some 140bhp and 178lbft - outputs sufficient for a 0-60mph time of 10.5 seconds and a top speed of a whisker under 120mph. Sidelined from sports racing duties by the DB3 programme, Works entered DB2/4 MKIs nevertheless contested the 1955 Monte Carlo Rally and Mille Miglia (their efforts on the former event netting the Team Prize). Of the 562 DB2/4 MKIs made, just 56 were 'home market' Drophead Coupes. Priced at £2,910 when new, Aston's handbuilt soft-top was almost twice as expensive as the contemporaneous Jaguar XK140 Drophead Coupe.

This particular example - chassis number LML/723 - represents an exciting opportunity to purchase a substantially unrestored and original car with noteworthy history. Recently entrusted to renowned marque specialist Four Ashes Garage by the vendor, the DB2/4 MKI has benefited from some minor fettling including having its ignition timing and carburetion settings adjusted to promote better engine performance. As part of its sojourn at Four Ashes Garage Chris Adams was commissioned to write a detailed provenance report and conduct a road test. The substance of his findings is reproduced below:

Brief History (As per the Aston Martin Ltd, AML, Build Sheet and Service Records)
Registered new as 'UPL 877' on the 19th June 1954, the car was sold by Brooklands of Bond Street to the first owner Iliffe Associated Press, (possibly Associated Iliffe Press, a well known publishing house from the 1950s - AML were notorious for getting company & other names wrong). It was originally Painted Orient Blue with Grey Leather and Red Piping. The carpets were Grey.

Of note were the optional Alfin Brake Drums fitted of which the rears are still on the car and the fronts accompany the car (although they are not fitted). Another appealing feature of the car was the fitment of either a new L1 cylinder head or the conversion of the car's original to L1 specification on 3rd April 1957 by AML Service Department, which significantly increased the performance of the car. From the detailed early Service Records it is clear the car had covered a reasonably high mileage by 1960 of approximately 50,000 miles, an average of some 8,300 miles per year.

In 1964 the car was re-registered as 'R 250' and retained this number through to April 1968 when it was bought by Capt Ivan Forshaw, a name synonymous with the Aston Martin marque. Around 1974/75 it was sold as 'PYR 332' (this registration was originally fitted to LML/923 which has no reference in any AMOC publication after 1967 & is assumed to be written off at this time) to Colonel Beauchamp by Richard Forshaw & then on to Richard Ruane.

In 1977/78 the car was sold to John Scott & Partners, Classic Car insurance brokers and then sold out of the company to John Scott himself. It was Mr Scott who sold the car to the current owner. The vendor, with the support of the AMOC, has reacquired the correct original registration number for the car, 'UPL 877'.

Conclusion:
The Chassis Plate containing both chassis and engine numbers corresponds with the stamped chassis number, on the RHS upper chassis box section near the bulkhead and adjacent to the brake reservoir, and the stamped engine number, on the timing case forward and next to the RHS of the oil filler. Furthermore the body number is stamped in a variety of places verifying the number stated in the Build Sheet.

The original colour scheme, Orient Blue, is visible on the hood frame areas & underside of dash panels which, by virtue of their inaccessibility, retain the majority of original paintwork. The car is largely un-tampered with since the 1970s or early 1980s when we think it had its respray & trim reworked. The originality of the car is evident from some of the still 'original' items which wear out when cars have had more use.

This car has an interesting history having been: used for press literature (verified with copy of photo from Autocar 20/04/56, page 389), owned by the Forshaw family, apparently having few owners and fortunate enough to regain its original registration. It can be used after purchase with only minor work and then carefully restored to a more useable specification over a period of time. However, we do not consider it needs a complete restoration as so many of these cars have been restored to beyond manufacturer's specification.

Engine:
Engine sounds in good order when cold with no abnormal noises. There are no visible water leaks or large oil leaks from the engine, just expected seepage for this type of engine. It has good cold oil pressure of 50 lbs @ 500 rpm and hot oil pressure of about 50lbs at 2000 rpm. There are no detrimental sediments visible in the radiator neck or oil filler neck. The distributor is at max advance at about 38° and fitted with with a DB2 rotor arm fitted (cma). The balance pipe rubber hose clip between the inlet manifolds has been over tightened, this has the effect of making the rubber deteriorate quickly. Stainless steel twin exhaust sytems and manifolds have been fitted - it hangs down too low making it vulnerable to knocks & scrapes. A DB2 radiator is fitted as it has a screw cap, however AML could have fitted this; the Mk I radiator should have a large bayonet style radiator cap.

Road tests:
Brief road tests were undertaken by Chris Adams both before and after the car had undergone its recent remedial work. Having driven the car for 8 miles and 5 miles respectively his favourable comments were as follows:

The gearbox is quiet with synchro weak on 3rd gear which could possibly be the synchro rivets loose on the gear. Steering is good considering it has an original style steering box (not GTC type). The turns are even and the steering light since rectifying the castor angles. The oil pressure was good towards the end of the road test with 50lbs at 2500rpm and since the car has now been tuned it goes very well. The axle is quiet. Brakes are good with a little 'long' travel, slightly noisy rear 'Alfins'?, possible careful setting up of the rear brakes will cure the long pedal."

Chassis LML/723 comes complete with extensive history file, including Heritage Certificate and letters from Captain Forshaw, and offers a rare opportunity to buy a car with provenance and originality that is eminently usable and distinct from the numerous 'newly' restored examples.
Share: