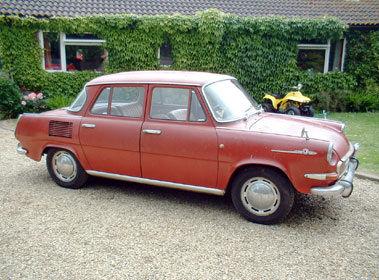 As significant within its home market and to its maker as the Mini, the MB range was introduced as a complete departure from previous separate chassised, front-engined Skodas. The MB in its title represents the new factory built to make the car, at Mlada Boleslav in Czechoslovakia. It featured a strong monocoque, rear-mounted 988cc engine and fully independent suspension, and in styling harks to the era of the Renault Dauphine and Ford Anglia, though it was introduced some years later than either, in 1964. Sold into Britain from 1965, the MB seemed a bargain at £579 new; cheaper than saloons such as the Cortina and Minx. Better equipped too, with reclining front seats, a heater and demister, full tool kit, and two boots (the front luggage area was supplemented by useful storage behind the fold-down rear seat). These MBs are as fondly remembered within the former Czechoslovakia as Minis are here, and they have a motor sport following too.

This ultra-rare right-hand drive `barn-find' survivor has had just one lady owner and covered a mere 14,696 miles from new. It is badged 1000 MBX deluxe and the roof features an unusual external strengthening rib that mirrors those pressed into the luggage and engine lids, unifying the design. The paintwork is scruffy but the bodywork appears solid, while the interior, spartan to our modern eyes, is little used. Some minor dents were accrued during the storm of 1987 - when the garage it was in partially collapsed - and the last of the accompanying MOT certificates expired during October 2001. Currently running and driving albeit without brakes, the Skoda should prove relatively straightforward to recommission. The car is eligible for the Czech club www.skoda-mbx.com, the UK Skoda Owners Club, the Unloved Soviet and Socialist Register (USSR) and also the UK's annual SALT rally. So whilst the utilitarian nature was not to everyone's taste, and though undoubtedly a cost-effective car for the 1960s; the MB was never a volume seller here and attrition rates were high. The end result for us today is an extremely rare `60s saloon providing an ideal entry into the world of Comecon motoring and Cold War backed motoring history.
Share this page: