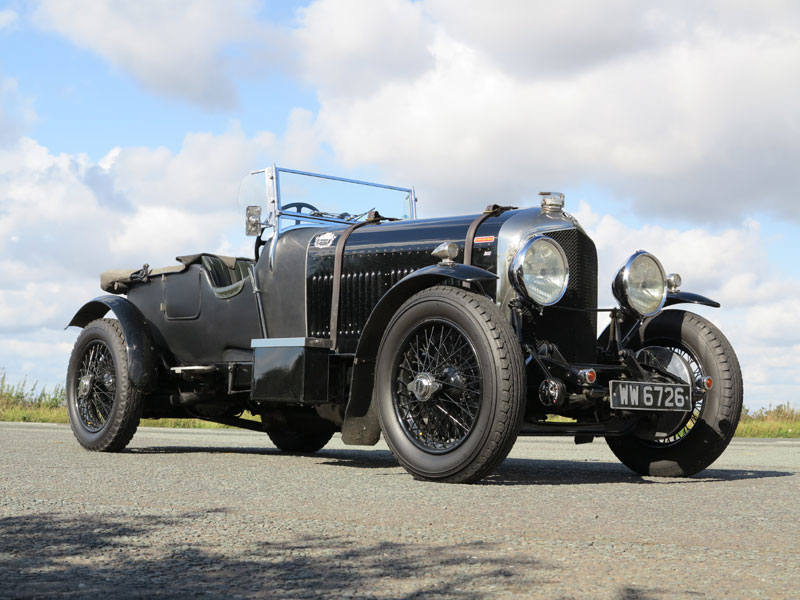 'Recipe: take a good 3-litre Bentley chassis, mix in a good 4.5-litre engine, gearbox and transmission and add a light body with accessories to taste. The result is a motor car which, while still retaining a good vintage flavour, possesses a performance equaled by few other machines even of the most modern and expensive type' (Captain J.G. Fry, The Autocar May 14th 1943).

Converted into a Tourer during 1963 and reconfigured to 3/4.5 Litre specification using its original `matching numbers' engine crankcase during the 1990s, `WW 6726' was nonetheless treated to an extensive `chassis up' restoration by the vendor. A long term Bentley Drivers' Club member, he sought to create a car that was - in his own terms - as usable and enjoyable as possible. Resembling one of the nine short wheelbase (9ft 9.5in) cars that W.O. Bentley created before adopting the longer wheelbase (10ft 10in) for series 4.5 Litre production, chassis HT1649 also sports a 4.5 Litre-type radiator for improved cooling and 4.5 Litre steering box for easier manoeuvring.

A veteran of numerous rallies and tours around the world, `WW 6726' has been developed with performance and reliability in mind. As such, it sports a full-flow oil filter, coil ignition, overdrive, electric fuel pumps and more modern SU HD8 carburettors. Though, the Autovac has been left in situ on the bulkhead should a new owner wish to reinstate it. Pleasingly retaining its original crankcase and magneto tower stampings, the uprated 4.5 Litre engine has not long been treated to a `Blower'-type block sourced from LMB Racing. The four-speed `C-type' manual gearbox is allied to a modern clutch, while the four-wheel drum brakes have been converted to hydraulic operation. Finished in Black with Dark Green leather upholstery, the four-seater rides on 20-inch wire wheels and utilises a 3.53:1 rear axle ratio.

The chassis number HT1649 is visible on a lozenge inside the nearside front dumb iron and on the front engine cross member. With its quick-release radiator filler cap, Le Mans-style fuel tank, fold flat windscreen (complete with aero screens), nearside-mounted spare wheel and cycle mudguards, the Bentley does not want for visual drama. An old FIVA Identity Card which accompanies the 3/4.5 Litre states the following: 'The chassis, gearbox and suspension are as original. The wheels have been reduced one inch in diameter to 20 inches and the brakes have been converted to hydraulic operation. The engine retains its original numbered crankcase but has been enlarged to 4398cc. Coil ignition replaces the original magnetos and electric pumps replace the autovac. The radiator is from a 4.5 Litre Bentley of the same period'.