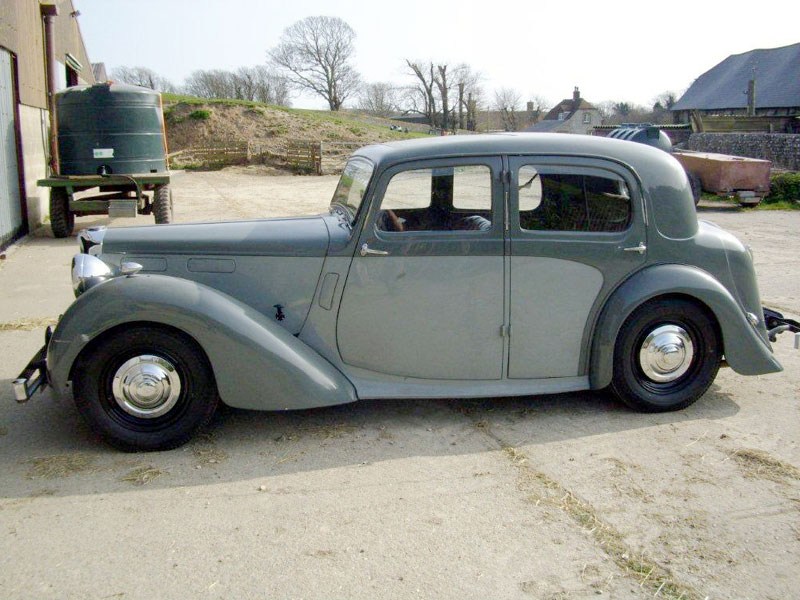 The TA 14 was Alvis's first post-WW2 offering and was sold from 1946 to 1950, at which point the model was superseded by the TA 21. The TA 14 was available in two configurations: a four-door Saloon with body by Mulliners of Birmingham, or a two-door Drophead Coupe with body by either Tickford or Carbodies. The model was based on a widened and lengthened pre-war Alvis 12/70 chassis and retained that car's leaf-sprung suspension and mechanically operated brakes. However, whereas the 12/70 was equipped with wire wheels, the newcomer was fitted with steel discs rims. The Alvis was powered by an enlarged 12/70 engine - a four-cylinder unit of 1892cc fed by a single SU carburetter and producing 65 bhp. This was mated to a four-speed manual gearbox. The Alvis had a top speed of around 74mph and could reach 60mph in just over 22 seconds. Some 3,311 examples of the model are said to have been produced in the four years of production.

We understand the 1949 TA 14 Saloon on offer came into the vendor's possession in July 1988, in a rather shabby but original state, having apparently spent considerable time in Kent. Dry stored until 1993, it was recommissioned the following year and used on and off until 1996, at which point it was decided to embark on an extensive restoration. Various problems ensued and it took until 2008 to fully recover the car from all those involved. Alvis marque specialists Red Triangle were then called upon to correctly reassemble the TA 14 and make the car roadworthy once more. It stayed with Red Triangle for about two years while replacements for any missing parts were sourced and fitted and the car slowly brought back to life. The Alvis remains in its original livery of two-tone Grey and sports its original Red leather seats. According to the vendor, 'KYN 299' is now a very sound, restored and re-wired car that just needs some cosmetic detailing and interior refitting for it to be completed to a very high standard. He believes but does not warrant the indicated mileage of 54,382 to be correct and the car is MOT'd until April next year.

PLEASE NOTE: The MOT for this vehicle expires March 2012.
Share this page: