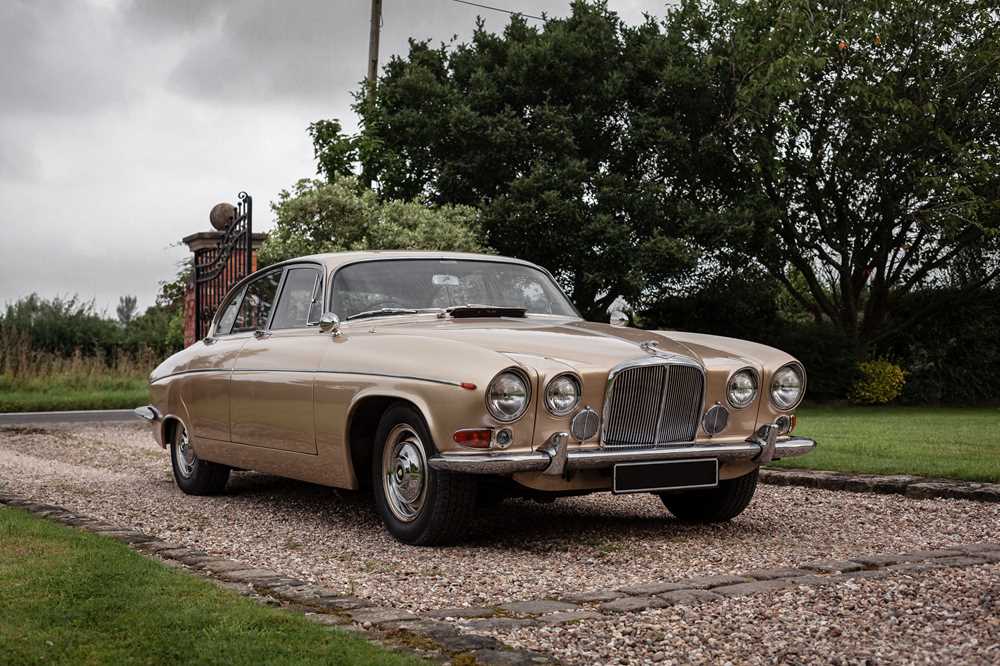 Jaguar's flagship saloon in its day, the luxurious 420G arrived in October 1966 as a – mainly cosmetic – update of the Mark X. Launched in October 1961, the Jaguar Mark X was technically more advanced than preceding Jaguar saloons, featuring independent rear suspension similar to that of the E-Type sports car and the tried-and-tested XK 3.8-litre six-cylinder engine. For a car weighing around two tons, the 120mph Mk X was impressively quick and, like all Jaguar saloons, its interior was exceptionally well-appointed and comfortable. The Mk X was being built with the 4.2-liter engine, an all-synchromesh gearbox and Marles Varamatic power-assisted steering among numerous other improvements by the time the face-lifted 420G (for 'Grand') version came along. Apart from a reshaped front grille and indicator repeater lights, there was little to differentiate the newcomer externally, while within the cabin there were improved seats and a revised dashboard. These alterations would be among the last made to the 420G, which was dropped in June 1970, its place as the forefront of Jaguar's saloon line-up having been taken by the newly introduced XJ6.

This striking right-hand drive, manual-transmission 420G is finished in metallic gold with a red leather interior and has been in the possession of the vendor's family since December 1986. Used extensively throughout this period, including long-distance traveling on the continent; the car has been maintained regardless of cost. The most recent work carried out (within the last year) comprises custom inertia reel seatbelts (and matching trimmed covers), a complete rebuild of the front suspension with uprated 'poly bushing and a recommissioned and correctly shimmed steering box (by Kiley Clinton Engineering). Back in 2015, the rear suspension was rebuilt with all new bushes and the shock absorbers were replaced all-around.

During the late 90s, it was deemed that the 'big cat', affectionately nicknamed 'Thunderbird II' was in dire need of some TLC and a major restoration commenced. Two photographic albums document this process and depict the car at the various stages, including professional replacement of metal to many of the lower sections. To complement the structural and aesthetic improvements at this time, Aldridge Ltd was tasked with a complete retrim of the car's interior to original specification, charging in excess of £5,000.00 for the work carried out.

Extensive accompanying documentation consists of the original handbook (in a wallet), sales brochures, a large quantity of receipts, MOT certificates dating back to 1992, and Swansea V5C registration document.