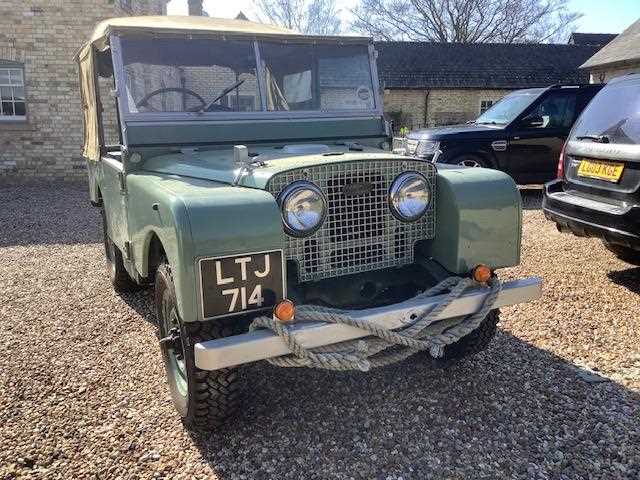 PLEASE NOTE: This estimate of this vehicle has been reduced.

H&H are indebted to the Vendor for the following description:

Registered 10.06.1950. The current owner purchased the car 18 years ago from an enthusiast in Halesowen who had been carrying out a running mechanical restoration. In 2014 the vehicle was stripped to a rolling chassis and a sympathetic restoration was carried out over the next two years. The intention was not to restore the car to concours condition but to a state that reflected the history of the vehicle. The chassis was stripped, checked, red oxided and painted dark green. The body was bead blasted, repaired as necessary and repainted in the original land rover light green. The bulkhead is rust-free and solid although it has been patched in places. The whole car was then carefully reassembled with many new parts. The car was previously owned by Fuzz Townshend of CarSOS when in 1992 he was the drummer of a grebo band, Pop Will Eat Itself! He blew up the original 1595cc engine and it was then fitted with the preferable 2 litre engine from 1951. The car has done less than 1,000 miles in the last 18 years and as it deserves to be used it is now for sale. After having sat idle for the last three years it recently started easily and drove well, but obviously will need checking over before serious use. Comes with a spare block, head, crank, flywheel of unknown condition that were with the car when purchased by the current owner. The pre-August 1950 series 1 cars did not have weather seals fitted to the doors but these are supplied in case the new owner wants to fit them. Overall a good solid example of an early Land Rover, not ridiculously overly restored but retaining its character of 71 years.