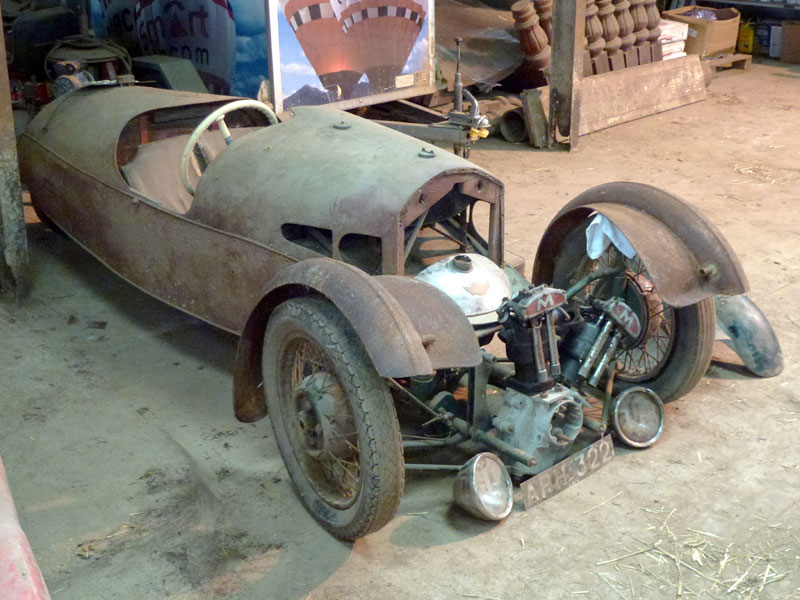 - Abandoned on the vendor's farm over twenty years ago

- Offered for sale at no reserve and without documentation

This Morgan Three-Wheeler has lain unclaimed on the vendor's farm for over twenty years. The number plate it wears - 'APH 322' - is still recorded on the DVLA and HPi databases but is associated with the chassis number 'D363'. Whereas, the number visible on its torque tube seems to read either '89' or '68'. Thus, it is possible that this lot has no claim to the registration number 'APH 322' especially as chassis 'D363' began life as a Family (4-seater) model. By contrast chassis '89' was built as a Sports (2-seater) model. The Morgan Three Wheeler Club have told us they would support an application to the DVLA for chassis '89' (or chassis '68') to be allocated an age-related registration number provided that the Morgan was 'rebuilt with appropriate period parts'. In need of extensive restoration, the Three-Wheeler appears to be fitted with a water-cooled Matchless V-twin engine (MX2/673) and separate three-speed manual gearbox. Sporting a `barrel back' body, it is self-evidently incomplete. Nevertheless, this 'barn find' Morgan has the makings of a worthwhile project. Offered for sale with sundry spares but no documentation.

PLEASE NOTE: Since the catalogue went to press we have been contacted by Martyn Webb, the Morgan Motor Company's archivist with the following information: 'The description that you have given is mostly correct although the engine number quoted (MX2/673) is for an air-cooled overhead-valve Matchless, whereas the engine illustrated has water-cooled barrels, (MX2 was air-cooled, MX4 was water-cooled), so it would seem that the engine has been altered in the past. According to our chassis records; MX2673 was originally fitted to chassis number D1704 which was a Super Sports model, despatched on 11th November 1936 to Jordan & Co, the Morgan dealer in Hull. 'APH 322' is a Surrey registration, so it is unlikely that this was originally allocated to chassis D1704. The body is a Super Sports model from the mid-1930s, so it may be that the engine is original to the body, albeit fitted with water-cooled barrels'.

PLEASE NOTE: The Morgan Three-Wheeler Club have recently been in touch to say that they do not think this lot has a claim to the registration number 'APH 322', the corresponding logbook for which was apparently sold on eBay in 2006.
Share: