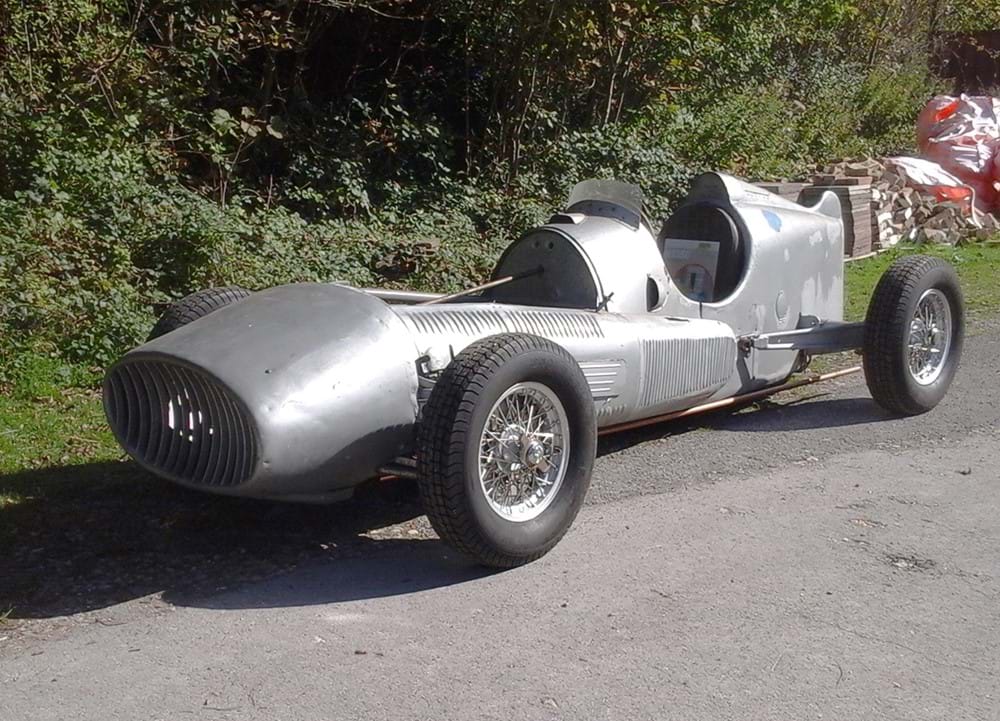 An historic and unique silver 1950 Alesso 7-Litre Formula Libre Single-Seater with links to five-time Formula One World Champion Juan Manuel Fangio is coming up for sale with H&H Classics on November 15th at Duxford, Imperial War Museum. The car is estimated to sell for £120,000 – £140,000.

The car was designed by Don Juan Ovidio Alesso with the help of Juan Manuel Fangio as an all-Argentinian single-seater that could challenge for international honours. It features a bespoke 7-litre, quad-cam, flat-12 engine, aeronautically inspired multi-tubular chassis and a hand-crafted aluminium body.

Alesso was promised support and funds by the Peron Government which never materialised and thus this brave effort to build a purely Argentinian challenger was outmoded before its full potential could be realized.

Coming to market for the first time in twenty-two years, the Alesso is said to be substantially complete though items such as the clutch, rear shock absorbers, timing wheels and instruments are missing. A fascinating piece of motorsport history with connections to a driver that many consider to the greatest of all time, the Alesso will surely be a sight (and sound) to behold once restored. Without doubt it will be a future star turn at the Goodwood Festival of Speed.

A highly gifted and innovative engineer with a passion for motorsport, Don Juan Ovidio Alesso initially conceived this enormously ambitious single-seater for domestic Formula Libre racing during the mid/late 1940s. However, as the likes of Juan Manuel Fangio, Benedict Campos and Jose Froilan Gonzales began to establish themselves on the European racing scene so the idea was floated of equipping them with a 'homegrown' machine that could fight for international honours; a challenge that Don Alesso was only too willing to accept.

Determined that its chassis, engine and body should be of Argentinian manufacture, he set to work. Influenced by contemporary aeronautical practice, the unique multi-tubular frame that Don Alesso fabricated saw several of its members double-up as oil and coolant tanks / conduits. Keen to assist with the project Fangio is understood to have sourced a set of Rudge Whitworth wire wheels and the independent front suspension from a competition Alfa Romeo. However, Don Alesso rejected the latter because he felt it would be unable to adequately support the newcomer's bespoke powerplant.

Having won the Rafaela 500-mile race on 24th December 1950 aboard a Talbot-Lago T26C, Fangio stayed in the area to attend a fund-raising banquet for the Alesso single-seater. Hampered by a lack of funds and teething troubles with the monstrous 7-litre powerplant, progress on the Formula Libre project was slow. After a series of successful test bench runs, the engine was finally installed on November 11th 1952 with the car making its public debut at Buenos Aires' 'October 17th' Autodrome shortly thereafter. Present that day were Juan Manuel Fangio (who had helped arrange the unveiling) and Luigi Villoresi both of whom apparently tried the Alesso and praised it to 'Peronist World' magazine.

Argentinian president Juan Peron took an interest in the single-seater promising land and money but sadly neither materialised. Don Alesso continued to develop the car driving it himself on occasion before employing the services of motorcycle champion Francisco Gonzalves who achieved the single-seater's best result at the Parque Urquiza in Parana. A change in Formula Libre regulations saw the car outmoded just as it was beginning to show promise. Clothed by Don Antonio Thimental in alloy and originally finished in the Argentinian national colours of blue with a yellow bonnet, Don Alesso's amazing creation had been mothballed by the decade's end.

Migrating to France during the 1990s, the single-seater was then bought by the late Paul Foulkes-Halbard and put on display at his Filching Manor Motor Museum. Mr Foulkes-Halbard is understood to visited Juan Manuel Fangio in Argentina to verify the car's provenance and to have planned to restore it to his former glory. Sadly, a fatal stroke in 2003 put pay to such plans.

Fangio is known for his quotable quotes: He said: “Driving fast on the track does not scare me. What scares me is when I drive on the highway I get passed by some idiot who thinks he is Fangio!” And: “I learned to approach driving like a game of billiards. If you bash the ball too hard you get nowhere. As you handle the cue properly you drive with more finesse.”

Juan Manuel Fangio set records that will be difficult to beat. The Argentine competed in 51 Formula 1 Grands prix, of which he won 24, set 28 pole positions and 23 fastest laps. In seven full F1 seasons, he won five world championships.

His racing apprenticesip was spent in long-distance races staged over thousands of miles on the dirt roads of South America.

He cut an unimpressive figure at 37 when he arrived in Europe, of average height and balding, and one of his two nicknames was 'El Chueco', or 'bandy legs', from his days playing football as a child. His motor racing career earned him another epithet - 'Maestro'.

Success in F1 came relatively late in life. Fangio was in his forties before he won his first world title in 1951. When he returned in 1953, his Maserati was outclassed by Alberto Ascari's Ferrari, but from 1954 he was unstoppable. Fangio won four titles in a row, two for Mercedes (after he won the first two races of '54 in a Maserati), and one for Ferrari, before returning to Maserati in 1957.

Stunningly fast but also clever and politically astute, Fangio always made sure he was in the right car, and his ability meant it was always his for the taking. He was the epitome of elegance, calm and ease. His philosophy was always to win at the slowest possible speed. Out of the car, no-one had a bad word to say about him.

"What made him so great," said Stirling Moss, "was his concentration and his balance of the motor car. He wasn't a technician. He was just a great artist of driving. But above all that he was a gentleman and a wonderful man."