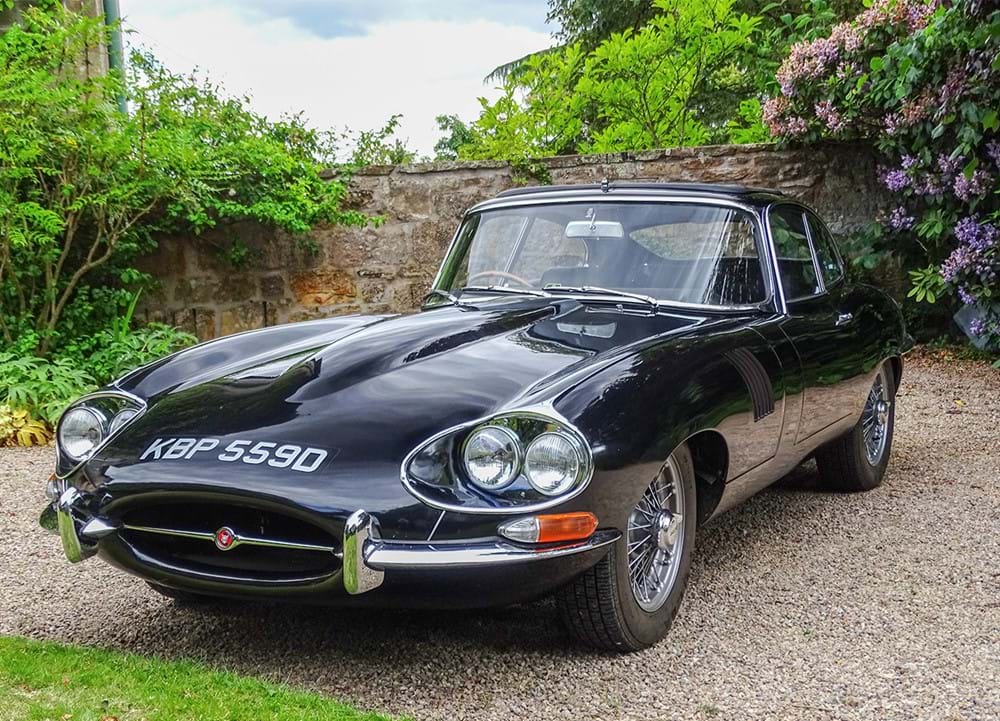 It will be offered for sale at ‘No Reserve’ on October 17th at the next H&H Classics auction at the Imperial War Museum, Duxford in Cambridgeshire. It is estimated to sell for around £40,000 to £50,000.

The car was supplied new by P.S. Nicholson Ltd of Forres to Hugh John Vaughan Campbell, the 6th Earl of Cawdor. It was inspired by the similarly bespoke Fixed Head Coupe made for Andrew Douglas Alexander Thomas Bruce, the 11th Earl of Elgin who was president of the RAC and Ecurie Ecosse at the time. Just three such 'quad headlamp / shark gill' E-Type bonnets are thought to have been fabricated by Abbey Panels with Sir William Lyons giving his blessing to the project. Registration No: KBP 559D, Chassis No: 1E21103

The name Cawdor was referenced in Macbeth by Shakespeare – “All Hail to thee, Thane of Cawdor!” But the Sixth Earl of Cawdor’s family were ennobled a few centuries later.

The family’s coat of arms bears the motto: ‘The pure heart shall sing when dying.'  But the Sixth Earl was something of a swashbuckler who lived life to the full. He dressed like a Restoration buck, wearing scarlet velvet jackets with black frogging, floppy cuffs and outsize buckles on his belt and shoes, the heels of which were covered in red patent leather to match the jacket.

He wrote off six E-type Jaguars in quick succession. His daughter, Lady Liza Campbell, wrote of him in her book: ‘Title Deeds: Growing up in Macbeth's Castle’: “Pa’s philosophy was that when in town obeying a red light after midnight was a sinful waste of precious time … Typically he would crash at night, after dinner … Instead of spotting any correlation between drinking and the crashes, my father came to an altogether different conclusion: E-types were rubbish and their suspensions dangerous … and thereafter he drove Ferraris.”

And indeed the car H&H are selling did suffer some accident damage in 1967 but was retained by the Cawdor family until 2003 when it entered the current ownership. Extensively restored by the vendor, the two-seater is the veteran of numerous rallies and is said to be a 'very good driving car with excellent road holding'. It has matching chassis and engine numbers.

Roger Nowell of H&H Classics commented; “This is an extremely rare version of the classic E-Type Jaguar with a fascinating Scottish provenance in good condition. A great car to drive and a superb investment in the very best of British automotive design and engineering. It is history on four wheels.”