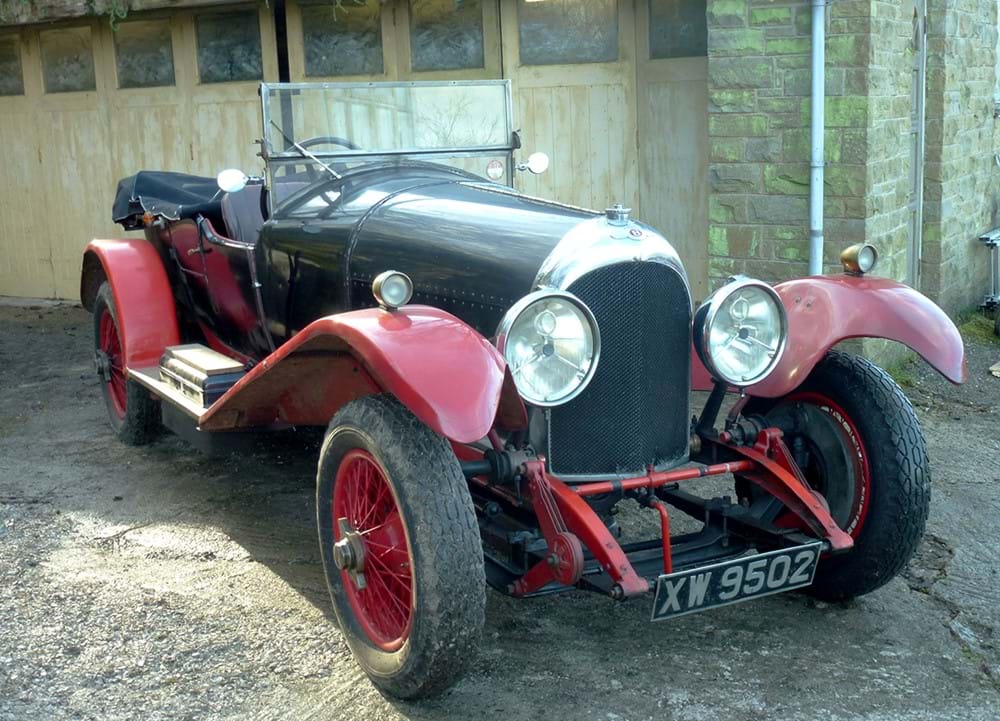 The Fastest Lorry in the world and one previously owned by press baron Sir Max Aitken (DSO/DFC).

The first car is a 1925 Bentley 3 Litre Speed Model that retains its original engine and Vanden Plas coachwork.

The car is presented in Black over Red with Red seats and is estimated to sell for £230,000 – £270,000. It is one of just 513 Speed Models built and has been in its current family ownership since 1958. It boasts the original engine and Vanden Plas coachwork and is offered with its history file. This stunning car is described as “something of a garage find.”

The Bentley 3 Litre was a car based on a chassis manufactured by Bentley. The company's first car, it was introduced in 1919 and the chassis was made available to customers' coachbuilders from 1921 to 1929. The Bentley was larger than the Bugattis that dominated racing at the time, but strength and innovative technology compensated for the extra weight. The 4000 lb (1800 kg) car won 24 hours Le Mans in 1924,  and again in 1927, this time in Super Sports form. Its weight, size, and speed prompted Ettore Bugatti to call it "the fastest lorry in the world."

The second Bentley in the H&H Classics sale is a 1947 Garnet over Silver Bentley MKVI Drophead Coupe, one of just six bodied to this particular design, which was supplied new to Sir John William Maxwell "Max" Aitken, 2nd Baronet, DSO, DFC. It is estimated to sell for £100,000 to £120,000.

Damian Jones, Head of Sales at H&H Classics, says: “The 1947 Bentley MKVI was found languishing in a farm building during 2010 by the vendor who then spent the next five years restoring it to its current condition.

Sir Max Aitken was the son of the great press baron, Lord Beaverbrook. He succeeded his father as Baron Beaverbrook on the latter's death on 9th June 1964, but disclaimed the title three days later on 12 June, stating that "there shall only be one Lord Beaverbrook in my lifetime". On his death in 1985, his son, also Max Aitken took on the title.

Sir John William Maxwell “Max” Aitken (1910-1985) was a British Conservative politician and press magnate was in his youth a keen sportsman and flew all over Europe and the USA and in 1935 joined the Royal Auxiliary Air Force. During WW2 he served as a pilot with 601 Squadron becoming its commanding officer in June 1940. He was awarded the Distinguished Service Order and the Distinguished Flying Cross for eight combat claims. Serving later with other squadrons he shot down a further six German aircraft. In 1946 he entered the family press business as a director of the Express Group. In 1945 he was elected to Parliament.

In the late 1950s, Aitken witnessed one of the early Miami Nassau Offshore Powerboat Races, then participated in the following year with his wife, Lady Violet. It was the experience of this new “sport” that led to his announcement at the 1961 London Boat Show of a similar ocean race to be staged in the south of England in August that year.

Together with John Coote they formulated the rules that saw the birth of the Cowes Torquay Offshore Powerboat Race, with the aim of improving the breed of sea-going fast cruisers and safety at sea. The Cowes Torquay will celebrate in 2010 the 50th year since Aitken founded it.