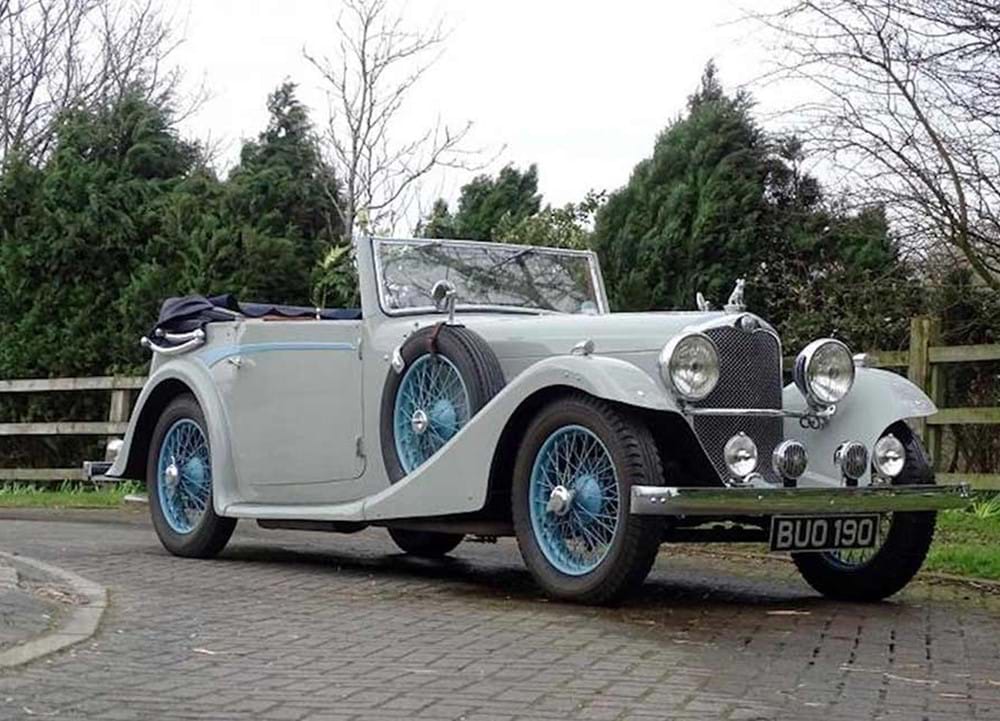 LONDON.- BREXIT was put on the back burner in Buxton’s Pavilion Gardens on April 10 as bidders attending the H&H Classics auction there, focussed instead on the great collection of classic cars for sale.

Such was the level of enthusiastic bidding in the room, on the phone and the internet that a sale total nudging £1m was achieved with a solid 76% of all cars sold on the day.

Achingly beautiful yet viciously quick, the E-Type remains for many the ultimate production Jaguar. The sale car had been sensibly upgraded for UK and continental touring with a five-speed manual gearbox, enhanced brakes, improved cooling and power steering. Originally supplied by Ritchies of Glasgow, the Roadster had been extensively restored and enjoyed during its fifteen years with the vendor’s family.

Launched at the 1961 Geneva Motor Show the Jaguar E-Type was nothing short of a revelation. With its heady blend of supercar performance, breath-taking styling and low price tag, the newcomer left rivals reeling and customers clamouring. Early sport scar racing success at the hands of Graham Hill and Roy Salvadori amongst others helped cement its reputation.

AC, one of the longest surviving manufacturers of quality vehicles in Britain, produced some wonderful cars over the years. They started in business as tricycle manufacturers over 100 years ago and although they have had various problems along the way, they are still here - which is more than can be said for a lot of the others.

Significant engine and other works had been carried out on the sale car by TT workshops in Wiltshire. There was a comprehensive history file with restoration invoices and a buff logbook.

This time-warp 56-year-old Mini 850 Super De Luxe sold for £14,375. Bought by a midwife from Aberdeen as a retirement present for herself, she drove it for just one year and sadly died, the car then remained in storage until 1982. It was then bequeathed to her brother-in-law who used it for a year before putting it up for auction at the Grampian Motor Museum in September 1983, where the present owner bought it.

Roger Nowell, of the H&H Classics Sales team says: “If you have always wanted a classic early Mini, this example is pretty hard to beat.”

The Mini was born out of conflict. With the after effects of the 1956-1957 Suez Crisis being felt worldwide, and its impact on fuel which went back on rationing, the automotive industrialist, Leonard Lord, commissioned Alec Issigonis to work on a radical small car project.

His response was the now legendary Mini which featured an ingenious transverse-mounted powertrain (with engine sat atop of the gearbox), all-round independent 'rubber cone' suspension, front-wheel drive and compact rack and pinion steering. The newcomer was a packaging masterpiece and not surprisingly turned out to be one of the most influential automotive designs ever conceived.

The Mini boasted a superb history file, all handbooks, price list, colour chart, sales brochure as well as MOTs from 1983 and 1984, tax disc from 1984 and the original Aberdeen registration number.

It still had a spare key in the original leather cover and still sported the Conway plastic protective seat covers from new. There were invoices on file for £5,000 of work carried out in 2009.