The 'Richard and Caroline Colton' Lifeboat arrives at Hastings 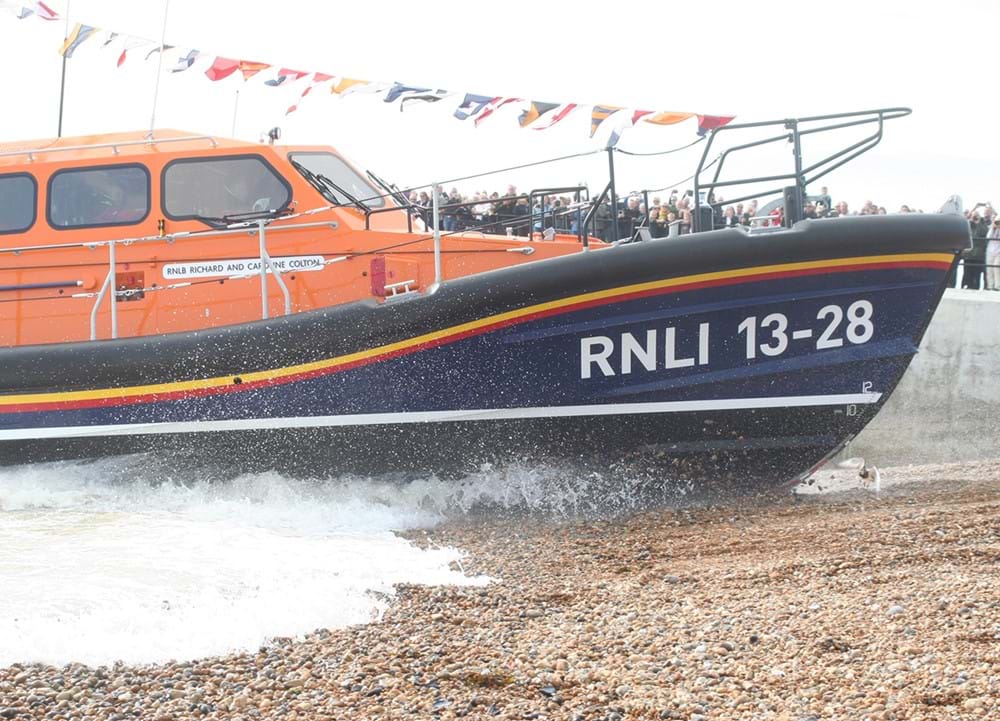 This weekend saw the launch of the Richard and Caroline Colton Lifeboat, which the RNLI funded from the world record-breaking bequest and sale of 'The Colton Ferraris'  at H&H Classics sale in Duxford in October 2015.

After raising £8.53m at the H&H auction, the largest donation in the charity's 125 year history, the proceeds were given to the RNLI to continue the 'Colton Legacy' in funding at least two new Shannon Lifeboats to be dedicated and Christened in their honour.

Charles Denton, godson to Richard and executor, was present at the ceremony and he commented:

"The weather just got better and better as the time drew closer for the arrival of RNLB Richard and Caroline Colton and at 12.00pm the sun shone on Hastings – a fitting tribute!

The RNLI put on a great display with the old Mersey class lifeboat poignantly leaving to collect the new arrival. She has history being the prototype Mersey class and serving for 33 years, the oldest boat in the fleet. She has not been refitted for 11 years and still looks brand new.  What a testament to the station! The new “Richard and Caroline Colton” boat is going to be well looked after.

We also saw for the first time the launch / recovery vehicle “Richard and Mark Colton” and you’ll see a picture attached of the first time the two were brought together. They are now all together figuratively speaking, being looked after by a deserving station to help save many lives at sea. Richard, Caroline and Mark rest in peace – what a legacy…

The RNLI pulled out the stops with a TAMAR, ATLANTIC and D Class boats welcoming the arrival of the old and new.

It wouldn’t surprise me if  over 2,000 people local people turned out to watch the arrival. We witnessed a display of “Richard and Caroline Colton” going through her paces. The technology within the cabin and the shock-absorbing seats mean that they don’t feel anything even when jumping around like they were on the day - and that means “full speed” whatever the conditions – something Richard would appreciate.

Then the landing – full speed up the beach – what a sight!

We were allowed in the boat after she had been washed down and spoke to the new Coxswain who had driven (probably not the correct sailing term) from Poole. He is just “blown over” by what she can do, whilst at the same time protecting the crew. In two more weeks, once everyone has been trained, she’ll become operational and starting to save lives at sea for the next 50 years!"

The official naming ceremony will take place in April 27th 2019 and will be open to the public.