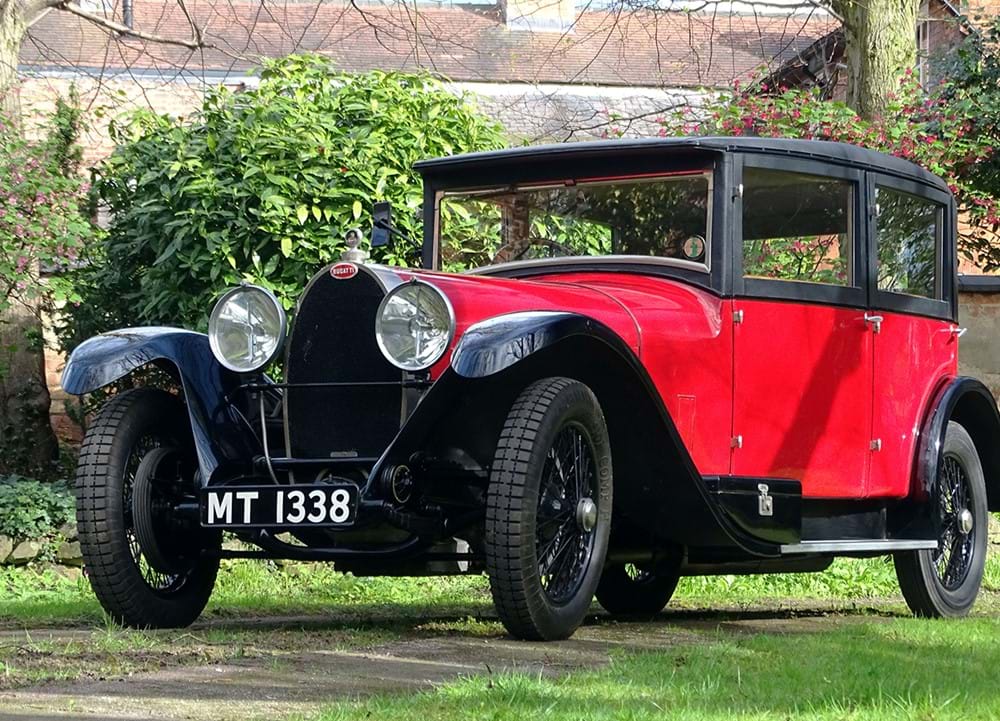 Extensively restored by Wilkinson's Coachbuilders of Derby from 1990-94 and 8,500 miles since.  This exquisite Vanvooren saloon body began life aboard another T44 that was supplied new to Jean Jacques Peugeot (of the car making dynasty).

“It is beautifully detailed with unusual triple-hinged doors and among the most delightful Vintage Saloons we have encountered,” says Damian Jones, Head of Sales for H&H Classics who are selling the car.

The car is something of a ‘come-back-kid’ having started life in the purple with the Peugeot family then drilled with bullet holes when German troops took up residence in the French chateaux where it was garaged. Monsieur Peugeot had taken the enclosed four-seater off the road when World War Two broke out during September 1939.

Unfortunately, his chateau at Montbeliard was subsequently occupied by German forces who one day used the Bugatti for target practice leaving tell-tale bullet holes in its doors. Returned to Monsieur Peugeot after the cessation of hostilities,

But the chassis and gearbox were retrieved intact and a new body was created from other Bugatti survivors and an engine from another. Today it is in concours condition.

Edgar Duffield writing in the Automotor Journal, 1928, says: "This Bugatti is decidedly sporting; yet it is just as emphatically smooth and sweet, and the flexibility on fourth speed is remarkable. When I ran Bugattis for two and a half years, I thought myself quite lucky if I got more than 400 or 500 yards of fourth speed in London . . . This 3 litre straight eight could be driven from 'The Bear' at Esher to Aldgate Pump on fourth speed, using third only for restarting after traffic lights. It is just as refined as it is fast; just as amusing a car in the hands as ever the little beggars were . . . For what my judgement is worth, the 23.6hp Bugatti is one of the five best, most interesting, most friendly, companionable and altogether delightful motorcars that can be bought in London today"

Introduced at the October 1927 Paris Salon, the Type 44 was heralded by Motorsport magazine as Bugatti's "first serious attempt at a Touring car". In the best Molsheim traditions, much of its exquisitely crafted running gear was common to other models. Thus, the new arrival's chassis was essentially carried over from the preceding Type 38, while its circular front axle, spiral-bevel back axle, four-speed manual gearbox and multi-plate clutch were derived from the Type 40 / Type 43 models. An acknowledged masterpiece, the Type 44's 2991cc straight-eight engine was based around two cast-iron cylinder blocks (complete with non-detachable heads) and boasted a centrally-driven single overhead camshaft that operated twenty-four valves (sixteen inlet / eight exhaust). Running in nine plain bearings (as opposed to the five roller ones used on the Type 35B etc), its finely balanced two-piece crankshaft endowed the unit with enviable smoothness and flexibility. Quoted as developing 80bhp, it was reputedly capable of running at anything from 125rpm to 4,500rpm. Praised for its pliant ride, taut handling and excellent refinement, the Type 44 rode on leaf-sprung suspension (semi-elliptic front / reversed quarter-elliptic rear) and benefited from self-compensating cable-operated 330mm drum brakes.

Bodied by the likes of Kellner, Weymann, James Young, Vanvooren and Molsheim itself, the Type 44's 3122mm wheelbase and 1250mm track played host to some wonderfully stylish coachwork. A typically strong performer - Motorsport magazine coaxed an indicated 95mph out of Colonel Sorel's fabric saloon - the model also proved to be Bugatti's most commercially successful car with some 1,095 rolling out of the factory gates between 1927 and 1930. Prized by enthusiasts worldwide, some led more adventurous lives than others (Norbert Jean Mahe drove his modified Type 44 to ninth overall but second in class at the 1934 Le Mans 24-hour race).

Little more than ten percent of Type 44 production is thought to have survived to the present day. Indeed, this particular example owes its continued existence to two siblings which donated their original engine and coachwork respectively. According to renowned Bugatti historian David Sewell, chassis 44667 was delivered new to London and first registered as ‘MT 1338’ by Middlesex County Council. Although the identity of its first owner is a mystery, the Type 44 is known to have belonged to Eric Tutton Esq. of Hayfield, near Stockport by the late 1930s. Confronted with cracked cylinder blocks, Mr Tutton jettisoned the original 3-litre straight-eight engine in favour of a much smaller four-cylinder Bugatti ‘Brescia’ one. The replacement powerplant served for some 50,000 miles thanks, in part, to some frame rail shortening and the fitment of a lightweight tourer body (taken from a Riley Lynx).

Acquired by dealer David Baldock Esq. some years later, chassis 44667 then passed to James Taylor Esq. (minus its second engine but complete with front / rear axles and gearbox). A Dover-based scrapyard owner, Mr Taylor retained the car until his death in 1980. Entering the current ownership a decade later, the original chassis frame was returned to its correct dimensions with the assistance of Mr Sewell who also helped source another Type 44 3-litre engine (ex-chassis 441192). As the then proprietor of the well-regarded coachbuilding / restoration firm Wilkinsons of Derby (established 1904), the vendor could have had any body design he fancied crafted for the Bugatti. Instead, he chose to rejuvenate the wonderfully elegant Vanvooren saloon coachwork that had initially adorned Jean-Jacques Peugeot’s Type 44 (chassis 44694). A member of the car making dynasty, Monsieur Peugeot took the enclosed four-seater off the road when World War Two broke out during September 1939.

Unfortunately, his chateau at Montbeliard was subsequently occupied by German forces who one day used the Bugatti for target practice leaving tell-tale bullet holes in its doors. Returned to Monsieur Peugeot after the cessation of hostilities, the Type 44 remained with him until 1962 when it was given to ‘Jabbo’ Klopper of the Netherlands. Mr Klopper chose to re-body chassis 44694 and thus its Vanvooren coachwork was acquired by Wolf Zeuner. A friend of Mr Sewell, the latter had been drawn to the saloon body not only because of its unusual patina but because of its elegant lines and high quality construction.

Unlike several of its peers, Vanvooren body number 2154 featured triple rather than double door hinges. Whether or not the Courbevoie-based coachbuilder was trying to curry favour with the Peugeot family by taking extra care over its fabrication is an intriguing but unproven hypothesis. Photographically documented, the refurbishment of ‘MT 1338’ took some four years to complete (1990-1994) and included a thorough overhaul of its correct type but replacement engine. Covering some 8,500 miles since then, the Bugatti has been on several Continental tours and remains a credit to its restorers. Starting readily upon inspection, it is quite simply among the nicest detailed and most appealing Vintage Saloons that we have encountered.