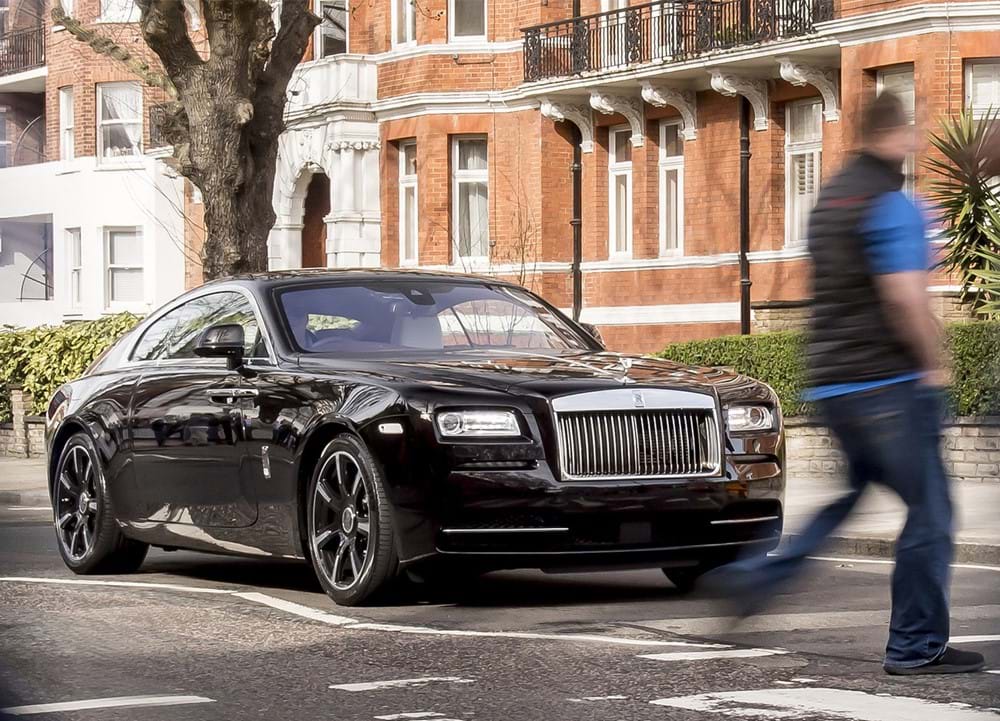 This ultimate collectors’ bespoke Rolls-Royce Wraith, inspired by the legacy of the late Sir George Martin’s phenomenal contribution to the British Music Industry (producing the music of the Beatles and many others), is offered for auction on Tuesday 10th October at Kensington Palace Orangery.

The car offered for auction by Rolls-Royce Motorcars normally sells for £350,000. It was Sir George’s wish that a proportion of the sale will be given to the charity ‘Navy Wings’, the Fly Navy Heritage Trust.

The ‘Inspired by British Music’ cars, created in collaboration with some of British music’s most revered rock and vocal artists, are truly bespoke by design with each car, a one-off creation, hand-built by Rolls-Royce in celebration of its unique commission. This stunning copper coloured car includes many nods to Sir George with his signature and No1 hits embossed on headrests and seats.

Few people know that Sir George served as an Observer in the Fleet Air Arm for 4 years in the early 1940s flying Barracudas and later in life was a longstanding Ambassador for the charity. His love of naval flying and of the technical achievement of naval aviation inspired him for the rest of his life. His son, Giles Martin, commissioned the Rolls-Royce Wraith as a tribute to his father as a visionary legacy, not only to his immense contribution to British music, but also as a way of ‘giving back’ to the Fleet Air Arm, so that the spirit of professionalism, teamwork and camaraderie of naval flying that he respected so much will live on in the flying heritage aircraft.

Simon Hope, auctioneer for the evening is chairman of H&H Classics and is one of just five auctioneers in the world to sell a classic car for more than $10m. He comments: “It is a privilege to be involved in this sale which includes a car whose provenance adds massively to its interest. This will truly be a once in a lifetime opportunity for fans of British music and classic cars to invest in a car whose value will only rise with time.” Simon does regular charity auctions for Outward Bound, the Heart Foundation, the Duke of Edinburgh Award, JDRF - Diabetes 1 charity and the RNLI.

The Sir George Martin’s Rolls Royce Wraith showcases his far-reaching influence on British pop culture particularly his legendary work with the Beatles and is a deeply personal expression of his music and personality. Like Sir George himself – uniquely non-conformist, uniquely talented, uniquely honourable, uniquely respected and uniquely charming – the Sir George Martin Wraith is an inspirational classic with an unrivalled place in our national musical culture and heritage.

This sensational car is personalised with Sir George’s name engraved on the door tread plates and on the base of the Spirit of Ecstasy adorning the Wraith’s bonnet. Other individual touches include the stunning light interior, his 30 number one hits on the leather ‘waterfall’ between the two rear seats, and his signature embroidered on the headrests.

An investment with great rarity value, this star lot also includes a money-can’t buy Rolls-Royce experience. Following your arrival at the Goodwood Hotel, guests will be chauffeured to an exclusive reception and dinner followed by a rare opportunity to tour the the Rolls-Royce factory ‘after dark’. The next morning they will have the chance to performance test drive Black Badge on the world-famous Goodwood race track and enjoy a delicious lunch at the Jackie Stewart Pavilion.