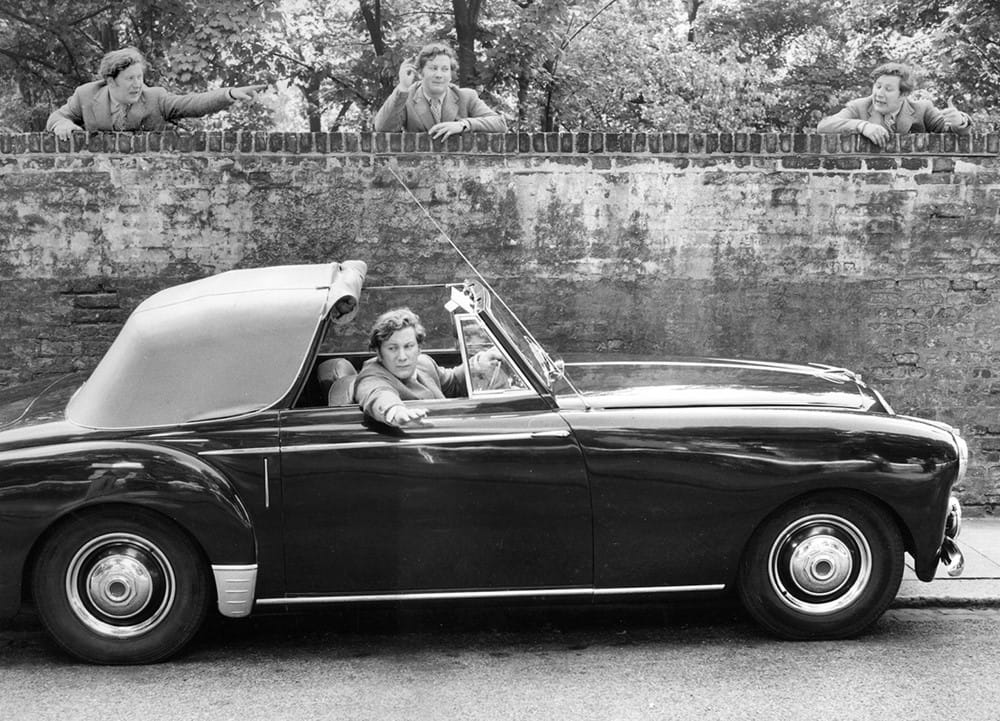 For Sale with H&H Classics on July 26th at Duxford

Sir Peter Ustinov, CBE FRSA, the acclaimed raconteur, double Academy Award winning film star and writer, chose this stunning 1954 Lagonda 3-Litre Drophead Coupe when he could afford a brand new car, perhaps inspired by Prince Philip’s near identical car – as both of them were members of the Thursday Club in Soho.

Ustinov’s Lagonda, NLO 950, which he owned for 12 years, is now for sale with H&H Classics on July 26th at the Imperial War Museum, Duxford in Cambridgeshire. The car is being sold by the family that has owned it since 1968, so this is the first time its come to market in 49 years.

Supplied via Brooklands of London to Sir Peter Ustinov it is notable for being the renowned actor and writer's first new car purchase. It was built as a 2.6 litre model but uprated with a 3-litre engine by the factory in November 1954 (and a four star diff three years later). The engine was overhauled in 1997 and the car is a veteran of numerous Continental trips.

“Last year we sold Prince Philip’s Lagonda for a world record price of £350,000. So the bar is set high. But the Ustinov car is a lovely example of the marque in first class order. With its provenance, its history with Peter Ustinov, it will doubtlessly attract much international interest."

Peter Ustinov won an Academy Award twice film actor, a director, writer, journalist and raconteur. He wrote and directed many acclaimed stage plays and led numerous international theatrical productions. He had an astonishingly successful film career as actor, director and writer, appearing in more than 100 film and television productions. He was awarded two Oscars for Best Supporting Actor - for his roles in Spartacus (1960) and Topkapi (1964). He subsequently received two more Oscar nominations as an actor and writer.

He was born Peter Alexander Freiherr von Ustinov on April 16, 1921, in Swiss Cottage, London, England. Ustinov had ancestral connections to Russian nobility, as well as to the Ethiopian Royal Family. His father, also known as "Klop", was a pilot in the German Air Force in WWI.

Not surprisingly Peter Ustinov was fluent in Russian, French, Italian, German, and English. He attended Westminster College from 1934-37 and took drama and acting classes with Michel St. Denis at the London Theatre Studio, 1937-39, and made his stage debut in 1938 in a theatre in Surrey.

From 1942-46 Ustinov served as a private soldier with the British Army's Royal Sussex Regiment. He was batman for David Niven and the two became lifelong friends. Ustinov spent most of his service working with the Army Cinema Unit, where he was involved in making recruitment films, wrote plays and appeared in three films as an actor.

His career slowed down but he made a comeback as Hercule Poirot in Death on the Nile in 1978. Ustinov's effortless style and his expertise in dialectic and physical comedy made him a regular guest of talk shows and late night comedians. "I am an international citizen conceived in Russia, born in England, working in Hollywood, living in Switzerland, and touring the World,” said Peter Ustinov.