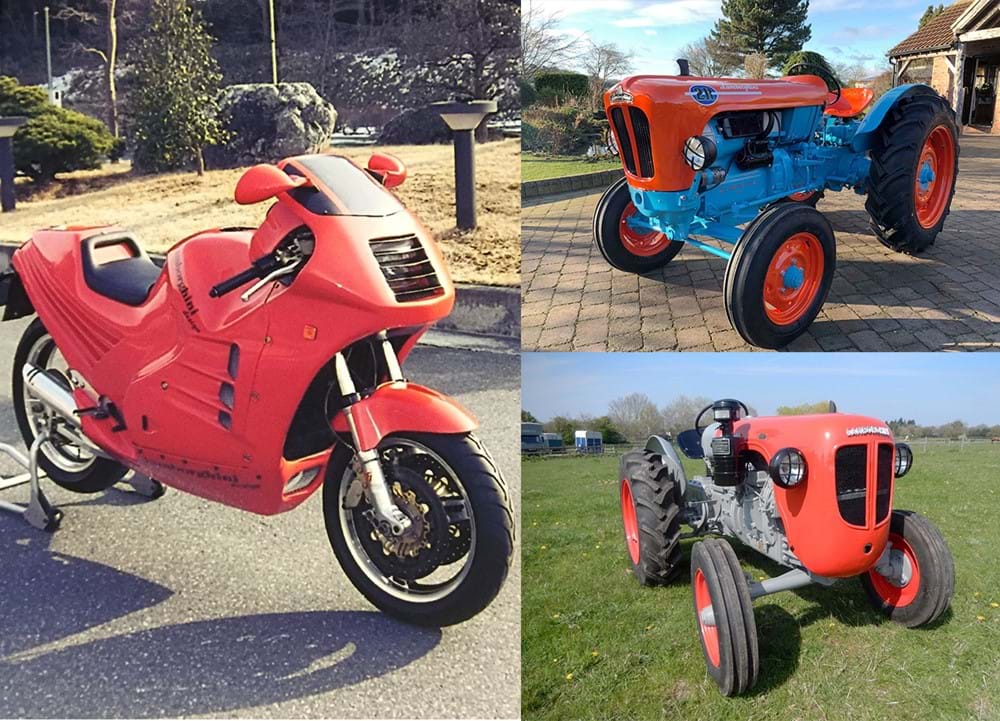 The next H&H Classics motorcar sale at the Imperial War Museum in Duxford on March 21st includes two Ferrucio-era Lamborghini tractors and an ultra-rare Lamborghini motorbike at the H&H motorcycle sale on March 4th at the National Motorcycle Museum, Birmingham.

Today it is synonymous with some of the world’s most glamorous hypercars, but Feruccio Lamborghini’s iconic firm started out as a tractor manufacturer in 1948. Thus, one of the slowest forms of internal combustion engine powered machinery begat one of the quickest! The first Lamborghini motorcar appeared during 1963 but it would be another ten years before Ferrucio sold his Trattori division to the SAME Group (who remain its custodian to this day).

Many petrolheads know about Lamborghini’s agricultural roots and the famous argument between Enzo Ferrari and Ferrucio which prompted the latter to become a direct competitor. However, comparatively few are aware that the supercar manufacturer’s logo has adorned motorcycles and even a helicopter.

The first tractor is a blue and red 1961 Lamborghini 2R which boasts full restoration by Italian specialists Ermes and Nicola Formilan. It has a three cylinder engine, PTO and pick up hitch and it comes with an Italian logbook and NOVA declaration. It is described as being in good running order and estimated to sell for £20,000 to £25,000.

Number two of only six ever made for Lamborghini by the Boxer company in France, it has had just one owner from new and displays a mere 7,200km to its odometer.

The second Lamborghini tractor is a red and grey 1956 Lamborghini DL30 which is estimated to sell or £15,000 to £20,000. It has been restored by Colin Clarke of Lamborghini specialists Colin Clarke Engineering. It is NOVA declared and has had minimal use since completion including display at the Goodwood Revival. It was supplied new by Beninca and has a twin-cylinder 1810cc engine, with a four speed manual gearbox.

Ferruccio Lamborghini launched Lamborghini Trattori in 1948, his early tractors utilising war surplus truck and military vehicle engines and differentials as their basis. Within a few years production had increased to 200 units a year whilst Italian-made engines replaced the dwindling supplies of war era stock. The twin-cylinder DL30 became available in 1952, featuring an OHV 26hp engine displacing some 1810cc driving through a four-speed manual gearbox with reverse gear.

Acquired and restored in 2014 by renowned Lamborghini specialists Colin Clarke Engineering, the example offered here was originally supplied by Beninca, whose supplier's plate it retains to this day. Described as being in "excellent" condition regarding its bodywork, engine, electrics, paintwork and gearbox, this delightful tractor is in full running order and was recently displayed at both Goodwood Revival and St John's Wood Show. NOVA registered and complete with its old Italian registration document, it has covered a minimal mileage since completion and would grace any collection or be ideal for the show circuit.