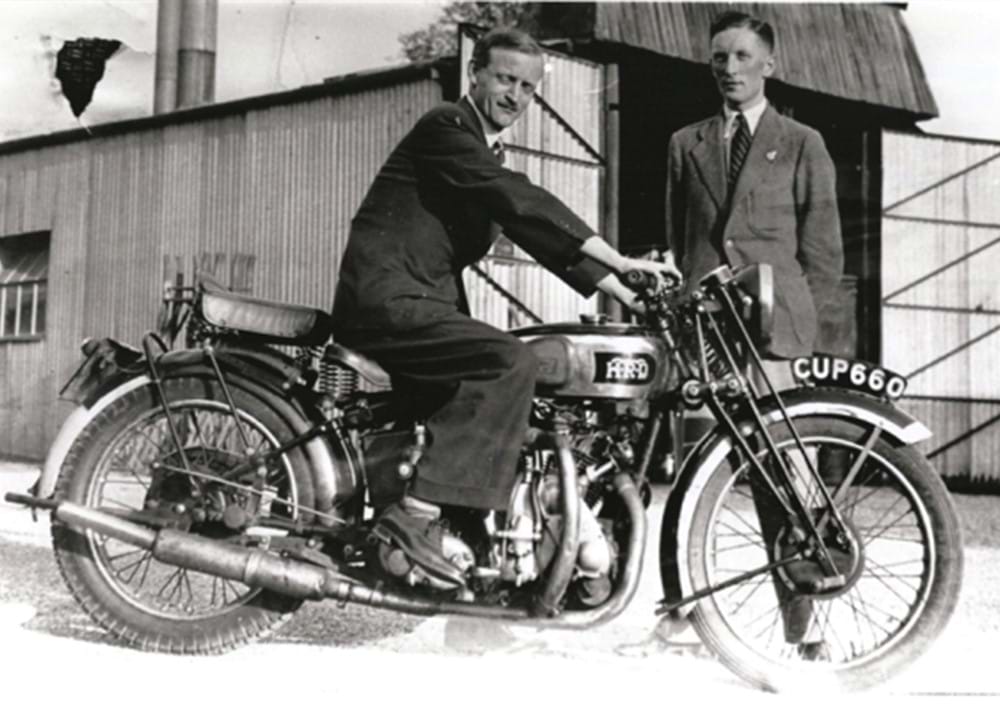 The sale on November 16th could well be a red-letter day for all of those who love classic British bikes. The current record for a Vincent is £201,000, sold in 2008. This bike could leave that price at the starting grid. This bike was once owned by racing driver, car builder and TV presenter, the legendary Alain de Cadenet.

Mark Bryan says: “The Series-A Rapide is seen as gold dust. Vincent was a small manufacturer in competition with Brough, but Vincent, unlike Brough, built their own engines. These bikes are incredibly collectable and in value they are closing in on the Brough. The strength of the vintage motorcycle market has been growing year on year, and does not seem to have been hindered by the current economic slow down. Bryan believes the future will see more record-breaking prices posted.

Only 78 of these bikes were produced between 1936 and the summer of 1939, and it is estimated of these just 50 survive today.  Nicknamed the ‘plumbers nightmare’ because of all of its external oil pipes the Series-A Rapide produced 45bhp at 5,500 rpm from a 998cc V-twin. It hit top speeds of 110mph, making it one of the fastest bikes of its generation.

When the Series ‘A’ HRD was announced to the press in October 1936, it caused a sensation by being the fastest production vehicle available for sale to the public at the time.  The decision to fit two of the well proven HRD Meteor cylinders onto a common crankcase was an inspiration which formed the basis for the renowned series of ‘B’, ‘C’ and ‘D’ Vincent twins that followed and remained in production until 1955.  All of these models are highly sought after of course but none are as rare as the Series ’A’ twins, the last of which were made in 1939.

The particular example on offer with H&H Classics is an amazingly rare and original survivor having been carefully stored in recent years.  Not only do the frame and engine numbers match but even the gearbox, oil pump and magneto numbers still conform to those on the original Works Order Sheet as does the colour of the tank.

Details of the motorcycle are known to the Vincent HRD Owner’s Club and it is unique amongst Series ‘A’ twins as being the only example that was photographed with Phil Vincent aboard!  This appeared in an article in ‘The Motorcycle’ in September 1940 which was reprinted in the VOC magazine ‘MPH’ issue 193 in February 1965.

By 1988 the bike was discovered with Brian Verrall of Tooting as a non-runner in need of restoration.  It was purchased by long term Vincent enthusiast and former Series ‘A’ Meteor owner Bill Cakebread by part exchanging his Black Shadow.  It was then totally rebuilt by Bill over the next few years and sold back to Verralls in 1993.  This famous dealership then sold it to a customer in Japan where it has remained in a private collection until discovered by the present owner and recently returned to the UK.

The registration number CUP 660 was briefly and incorrectly allocated to another replica machine but thanks to records held by a previous owner and support from the DVLA, the number has now been restored to its rightful place.  This is all verified by the documentation file which accompanies the machine.

This represents a unique opportunity to acquire a most original and genuine ‘Superbike’ from the pre-war era that can still provide an exhilarating ride or grace any serious collector's stable.