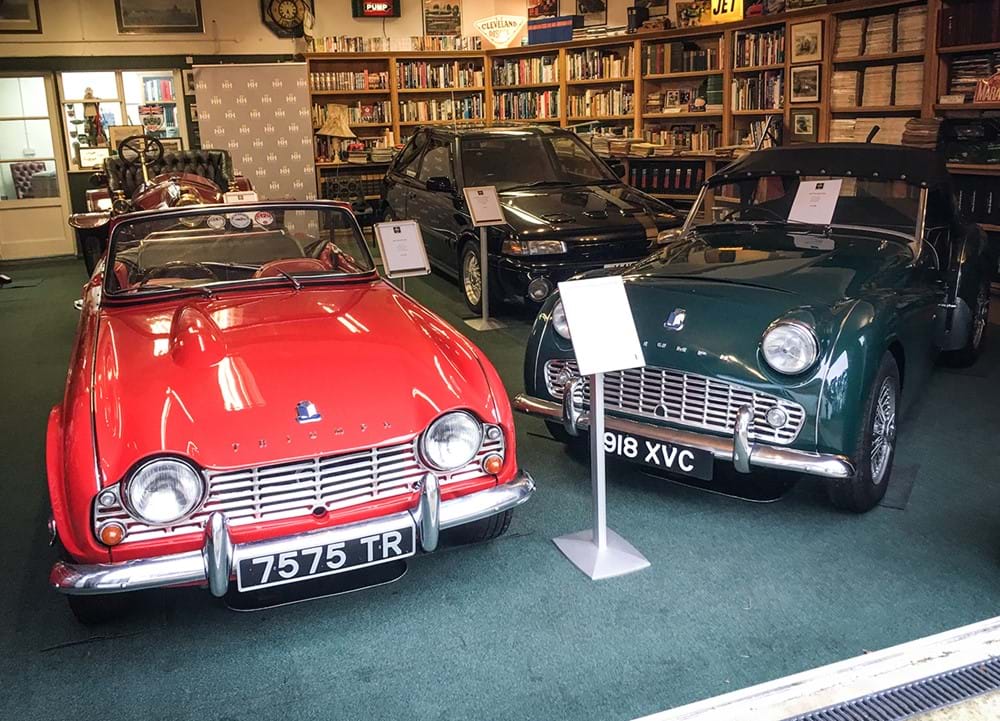 The H&H Classics Private Sales Surrey Showroom currently features a Triumph TR3A, a Triumph TR4, a Mazda323 GTR and a Sizaire Naudin. While in storage unit there is a Subaru WRX Sti final edition, a Porsche Boxster 550 and an Alfa Spyder.

The car in the right hand corner of this picture is a Mazda 323 GTR which is a Homologation Special produced to legalise their Rally car. It features a twin cam turbo with 4WD and is a real ‘road rocket’, says former race driver, John Markey who runs the showroom.

Alongside the Mazda is a 1913 Sizaire Naudin, very advanced for it's time, with a three speed gearbox incorporated in the rear axle and a four cylinder IOE engine (OVERHEAD INLET VALVE, SIDE EXHAUST).

Front right is a Triumph TR3A which has been subject to a ground up rebuild in South Africa and alongside it on the left is a TR4 looking superb in red with competition wire wheels and overdrive.

H&H Classics also have a Porsche Boxster S 550 Spyder, a numbered 'Commemoration' model with Tiptronic gearbox one of approximately 150 in RHD together with one of the last Subaru WRX STi Sports Hatch's in superb condition.

There are also two fabulous single seaters available. A 1960 T51 Cooper with 2 litre Climax which competed in the German Grand Prix in 1960 and also at Rheims, Solitude, Montlhery. Under the ownership of Swiss privateer Robert Adda, Gerard Laureau drove this car in Formula 2 events in France and Belgium and in the Formula One Solitude Grand Prix in Germany.

As a matter of interest in 1968 Jack Brabham driving a Cooper T51 made history, becoming the first driver to win the World Drivers Championship with an engine behind the driver. This set the precedent for rear-engine cars to dominate Formula One right up to the modern day.

H&H Classics in Surrey will also offer a second single seater, a 1959 Elva 100 Formula Junior powered by a DKW engine which raced throughout America and in the Lurani events at Spa and Monza. It has three spare engines.

Coming shortly is a 1960 Cooper T51 2 litre Climax with period GP history, and a Formula Junior Elva  DKW with three spare engines and subject to price agreement is a 3/4.5 litre Bentley.

John Markey, from H&H Private Sales Team, comments: “We are particularly pleased to be able to start the year with such a strong selection of very special classic cars.”