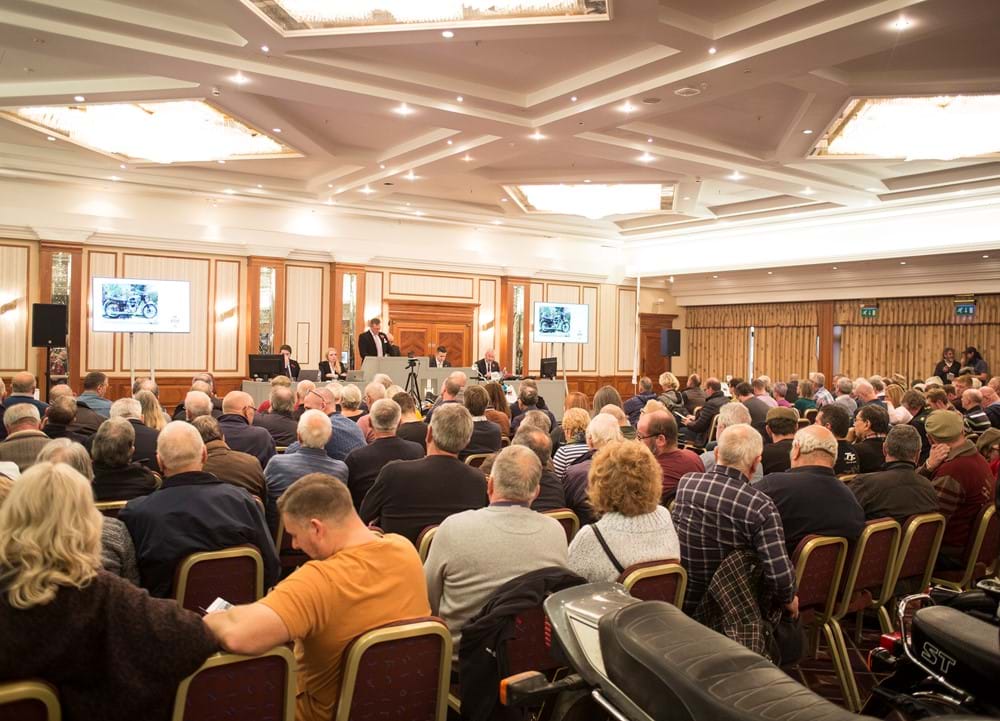 Mark Bryan, Motorcycle Specialist at H&H Classics, said after the sale: “There has been some talk of the bike market cooling, but we saw nothing of that at our sale which had a packed house and some very energetic bidding. The mood was high revving!”

This 1950 Vincent series C Black Shadow with all matching numbers and low ownership, as confirmed by the VOC was dispatched to Conway's of London on the 24th of February 1950.

It had been in its current ownership for 21 years and had been enjoyed on many Vincent events around the world.The sale provided a wonderful opportunity to own a full matching engine and frame numbered Vincent black shadow with old brown logbook and V5C and bidding reflected the interest.

This Shadow had a comprehensive history file going back to the early fifties, including some enthusiastic letters between previous owners on what adventures it has been on and where and speeds up to 130mph! It is believed that one of the first owners was the secretary of the VOC. Whilst it has been used regularly most of its life it had been maintained to an excellent standard. There were significant receipts from Conway's for parts purchased during its time on the road. There were some upgrades to the machine, uprated suspension to the forks and seat area, also an Alton dynamo, and ease to put on the stand, a Hills centre stand.

Even modern bikes like this 90s Aprilla performed strongly making £9,225 against a pre-sale estimate of £8,000 to £10,000 showing that it is becoming a collectable item despite its youth.

This Aprilla was1000 miles from new and proved to be as described in the sale catalogue: “ A very collectable 90's 250cc 2 stroke race replica.In good running order.Described as "very good" all round. Complete with books and two keys.”

Another fascinating machine among the gleaming bikes that covered more than a century at the sale was this beautiful veteran – a very rare, interesting and well-known bike, a 1913 Precision 499cc Twin with later fitted 3-speed Sturmey Archer rear hub (and Pioneer certificate). It has a London to Brighton history as well as a comprehensive history file. It has not been used for last couple of years so may require some light recommissioning. It sold for £15,750 doubling its pre-sale estimate of £7,000 to £9,000.

And then there was this 'time-warp' Royal Enfield barn-find, discovered after 53 years by Mark Bryan which sold for £8,100.

This Royal Enfield Constellation 700cc with its Wessex sidecar was a perfect ‘time capsule’, found in a Birmingham garage at the bottom of an overgrown garden with overalls, helmets and maps still sat in the sidecar when they were last used 53 years ago by John Hardwicke. The late Mr Hardwicke bought the bike new in 1962 for £231, used it briefly then parked it in his garage at the bottom of the garden and never took it out for 53 years after the birth of his daughter.

When Mark Bryan arrived to look at the bike after its owner had passed away there was a tree that had grown up in front of the garage door blocking it. “There is something just magical in finding a sleeping beauty like this bike, that has stood patiently waiting for its next trip out for more than five decades. It really was a special moment finding this bike,” he said.

A beautiful 1939 Ariel Square Four 4G sold for £20,531 against a pre-sale estimate of £17,000 to £19,00. This machine had a recent restoration to a very high standard. It was one of the clocks in tank model and was originally dispatched to Kings of Oxford 9th March 1939. It has been part of a private collection and dry stored for last 7/8 years so may require some light re commissioning. It was offered complete with some paperwork, old MOT's and old tax discs.